La Paz, the Off-Road Capital of The World 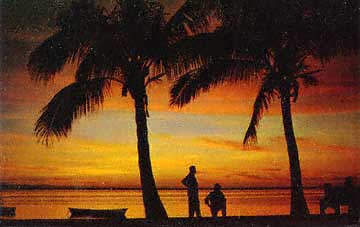 This is series of stories about the Capital of Baja South, Mexico and its importance to the Offroad Industry and the worlds of Hollywood and Entertainment.

[Pictured, Sunset on the Famous Malecon]

BACK in the 1960's, La Paz, which lies along the Sea of Cortez, in Baja California, seemed poised to become the next great Mexican getaway. Its white sand beaches were less crowded than those of Acapulco, while its sport fishing was as good as anything you could find at Cabo San Lucas. And it acquired a brief fame when Bing Crosby bought a home in a nearby fly-in resort, as did Desi Arnaz, who swam in a pool built in the shape of a flamenco guitar.

Time for ice cream on the Malecón.
But the tourist boom never came. Perhaps because the topography didn't easily lend itself to the kinds of megaresorts and golf courses that are a staple of today's upscale vacation spots. Or maybe La Paz, with its workaday citizens and smoke-bellowing Pemex refinery on the edge of town, has always been too functional to be the kind of idyllic escape many travelers look for when they head off for a warm-weather vacation.
Whatever the reason, La Paz, with its fine beaches and dependably sunny weather, today remains a sleepy city of 200,000 residents largely unknown to most Americans.
And that, perhaps, is the best reason for going there.
A visitor to modern La Paz, whose name means "peace," will find a casual and untrampled city drowsing peacefully along the bay under the fierce Mexican sun. During a marine expedition he took to La Paz in the 1940's to collect marine life, John Steinbeck described the city as "a Hollywood production, the fine, low buildings close down to the water and trees flanking them and a colored bandstand on the water's edge."
La Paz is only 90 miles to the north of Cabo San Lucas, but it is so strikingly different as to appear to belong to another Baja. For starters, La Paz is a working city, the capital of southern Baja, not a resort town, and there are few big hotels or spring-breaker clubs serving tequila to tourists. You will not find a branch of Cabo Wabo, the famously (and proudly) tacky bar in Cabo San Lucas owned by the rock singer Sammy Hagar, which in and of itself makes La Paz an appealing destination.
Many residents of La Paz speak only Spanish, and the downtown, with its Mission-style architecture and its sun-baked avenues leading down to the bay, is distinctly Mexican.
One day, at Playa del Tesoro, a covelike beach a few miles from town, a visitor swam lazily while tractor-trailers buzzed by. They were heading to the ferry, which sails from a port up the road called Pichilingue and transports everything from cigarettes to a circus to and from the mainland.
While La Paz is off the beaten track to most Americans - the name tends to conjure images of the city in Bolivia - its beaches have made it a vacation spot for middle-class Mexicans, who fly in from Mexico City or drive from northern Baja.
At night, they crowd the Malecón, a pretty tree-lined promenade that skirts the bay. Fronted by a row of shops and noisy restaurants, and running along Alvaro Obregón, the main road to the beaches, the Malecón is the center of life in La Paz, part boardwalk and part drag strip. On a balmy evening there in early July, Mexican families bunched near the entrance of La Fuente, a popular shop that sells helados, which, in this case, are ices made of fresh fruit.
Pickup trucks rolled by with groups of children standing in back, peering over the cab at the crowded sidewalks. The music from the passing cars was wildly diverse. Beyoncé's "Baby Boy" would blare from a souped-up compact filled with rowdy teenagers, and then two men would slowly drive past in a farm truck, listening to mariachi music. All night, a group of women prowled the Malecón in a beat-up Jaguar with California plates, yelling "Guapo!"("Handsome!") to passing men.
Like most coastal cities, a large part of life in La Paz revolves around the water. Daylight reveals the pleasure boats that have anchored in the bay during the night, and restaurants supplement quesadillas or tacos with a menu of fresh crab, shrimp and fish. The beaches extend along an arid peninsula that curves like a bent thumb around the coast. At the tip is Playa el Tecolote, a wide, rugged, open beach dotted with thatch-roofed bars and taquerías and crowded on weekends.
There, you can rent a fiberglass skiff called a panga and go to Isla Espíritu Santo, an uninhabited island where there is good snorkeling and an abandoned pearl works, a remnant from the days when La Paz was known as a pearl capital and a target for marauding sea pirates.
Of course, there is also the fishing. David Jones, who owns the Fishermen's Fleet, which offers guided trips, said the variety of fish in the Sea of Cortez and the great depth of the water so close to the shoreline are what make the region one of the best places to run a line. Clark Gable used to come here to fish for marlin, and an old photo of him posing with one as big as a beer barrel hangs in the bar at Los Arcos, one of the 1950's-era hotels along the Malecón.

There are other places in the world where the fishing is this good," said Mr. Jones, sitting in his tiny office downtown, "but you and I aren't good enough and we don't have the money to get there. La Paz is accessible and the fishing is both easy and plentiful."

Mr. Jones moved his family to La Paz a decade ago from Silicon Valley, and he has since developed the wizened and salty manner of another expatriate to the city, Ray Cannon. A screenwriter and director in the early days of Hollywood (his credits include Buster Keaton's "Go West"), Mr. Cannon decamped to Baja in the 1950's, grew a scruffy beard and remade himself as a "Vagabundo del Mar," a sea-going gypsy. When he wasn't fishing or drinking at Los Arcos, which was often, he acted as a one-man tourism board, celebrating life on Baja in a travel book, "Sea of Cortez," now out of print.
At Playa el Tecolote, the beach on the tip of the cove, a series of dirt roads snake through the mountains and wind along the rocky coastline for miles. At the end of one of them is the Club de Caza y Pesca Las Cruces, the hunting and fishing club that counted Bing Crosby and Desi Arnaz as members.
These days, the resort, which had its heyday in the 1960's, is a faded relic - "like something out of 'The Shining,' " as one local described it. The buildings still stand and there is an active member roll, but the surrounding land is as rugged and undeveloped as it was a half century ago.
That may soon change. Once again, someone has discovered La Paz: In 2003 Money magazine named the city one of the best places to retire to. Mr. Jones has heard rumors that new resorts and condos will soon follow. But knowing the history of La Paz, he has reacted with caution. "You hear a lot of talk about that sort of thing down here," he said. "Sometimes these things pan out, and sometimes they don't."
Courtesy: NY Times
Posted by black e media at 2:33 AM Links to this post