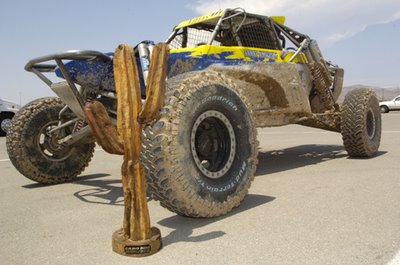 The CABO 500 announced on Thursday, July 27th in Las Vegas Nevada, a record Prize Offering for the 2007 race. Also at the conference, the CABO 500 Spirit Of Offroad Award was given to Danny Anderson for his performance at the 2006 race. Danny and the T-Bird Lounge Team won the 2006 CABO 500, a Mexican National Championship Offroad Race and a State of Southern Baja California Championship Race. Danny whipped the field to win the CABO 500 award.

The accomplishment is historic. Danny's win was the first ever in the Republic of Mexico and the State of Southern Baja. The CABO 500 was the first ever "Invitational" for Americans in Mexico. The CABO 500 host Baja Safari Mexico Club told the Baja Racing News this week, "We will be providing more Exclusive Race Services again in 2007, only the best, like the 2006 race, hosted parties and free racers services". "We have teamed with a world-class race sponsor for the 2007 race, which we will announce in Vegas".

The 2007 race is planned for early Spring, 2007. For more information see the Official Website.

Posted by black e media at 1:13 AM Links to this post

Rumble and Lightning at the Ranch! 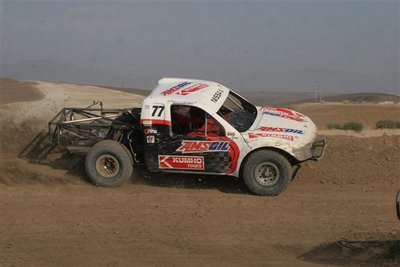 CORR racing in Southern California-San Diego-Chula Vista this weekend was brutal! As lightning crashed south of the track in Tijuana, the offroad racers of CORR slammed and banged to wins and disappointment! For the fans, it is the best offroad show in the business! Accomodating services, great location and the finest offroad racing right in front of you!

With a new track layout, a 'calamity corner has been created, forcing the racers to bang it out.
Heres the release:
Record high heats, and a new track layout created challenges for drivers in rounds 7 and 8 of the CORR Lucas Oil Championship Off Road Racing Series. Turn three, an off camber, hairpin turn was the cause of many problems. Trucks were forced to slow nearly to a stop in order to maneuver the turn. The crowd witnessed drivers up on two wheels, flips, and lots of contact. 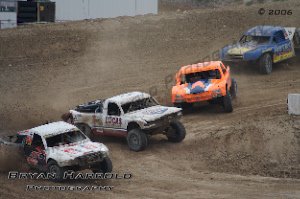 In an exciting Pro 4 race, was forced to pit due to a flat tire, but he was able to catch the lead lap. The mandatory yellow gave Greaves the chance to get back with the other drivers. When the track went green again he shot from the back of the pack to third place. Josh Baldwin, who led nearly the entire race, held off and crossed the finished line for his first ever Pro 4 win. 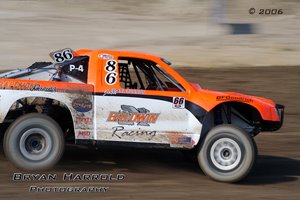 Huseman fought to stay in second with Greaves at his tail, battling with some contact and a failed attempt by Greaves to pass.

Sunday brought one of the most thrilling races of the season to the Pro 4 division. took the whole shot and held to the front for awhile. Some of the top drivers dropped off one by one with truck problem. Carl was black flagged for aggressive driving but that didn’t hinder him. He got out in time to catch the mandatory yellow and fall back into the race. Scott Douglas got around Cenni and led a large portion of the race. Running top three for awhile were Douglas, Cenni and Huseman. Renezeder made his way up and eventually passed Huseman and Cenni. In a controversial move in the final lap Renezeder passed , giving Cenni the opportunity to move into second. At the finish line things were heated between Renezeder, who took first and Douglas who ended in third. After reviewing the replay and much discussion the Race Review Board will leave Renezeder to keep his first place win but penalize him ten points. 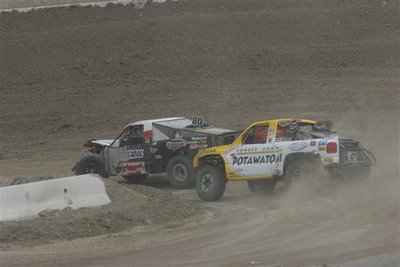 A red flag thrown in the first lap caused the Pro 2s to restart their race both Saturday and Sunday. On Saturday, the restart proved to be beneficial to who had a flat and who lost a wheel in a pile up near the finish line. Again lots of crashed and car problems had the In the end took first, with in second followed by .

On Sunday, the Pro 2 division was filled with crashes. Turn three was the cause of the red flag with and tangled up. In an unusual race with several crashes, truck problems, and black flags the top drivers changed consistently. , Scott Douglas, , and all fought toward the front but none held on, except . During the mandatory yellow barely caught up to the rest of the drivers after his brakes were locked up. Next, he somehow got back in the race and moved into second though a far distance from leader Renezder. drove much of the race with a broken suspension after came down on him; but still he was able to finish in third. Several point penalties are still pending and are predicted to be announced Tuesday. 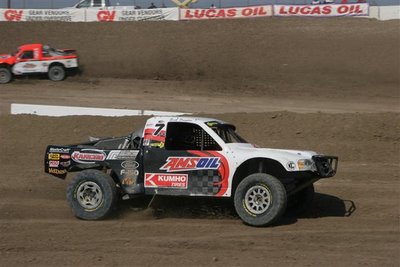 In the Pro Lite division, Jeff Kincaid has now won seven of eight races, extending his winning streak to five. His good friend, the only driver to stay on the podium this season saw his own streak come to an end with a fourth place finish on Sunday. On Saturday, Art Smitt trailed behind Kincaid and Hord with

On Sunday, got out to an early lead. Kincaid caught up to him and eventually was able to overtake Hord. Kyle LeDuc who had been running in third also got around Hord taking second. Rookie Robert Knaughton who has shown he can run in the front of the pack, but has struggled with problems lately got back into the running and was also able to pass Hord, taking third. 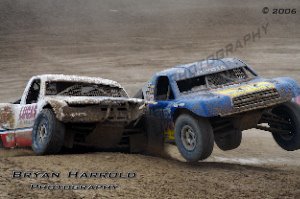 Posted by black e media at 11:20 AM Links to this post