Trigger Gumm, of San Clemente, is trying again for a world record.

SAN CLEMENTE – Moments after Trigger Gumm's spectacular motorcycle crash that shattered vertebrae and caused a concussion during his world-record setting attempt last summer, he stood up and walked away. He was taken to a local Miami, Oklahoma hospital, where doctors wanted to perform surgery immediately on his back.
"I was thinking, 'Dude, I am in Miami, Oklahoma, not Newport Beach," the San Clemente resident said. "There's no way they are going to operate on me."
So Gumm removed the IV's from his arm, turned to his mom, Judy, who was at his bedside, and said let's get out of here. Judy booked a first-class flight and the pair booked it back to Orange County.
Home, Gumm wasn't in the clear. He was referred to a back specialist since he still had five fractures in his vertebrae and his ribs had detached from his spine.
"The doctor told me I was fortunate to leave when I did," Gumm said. "He said there was no way I needed to have surgery."
But Gumm did need rest. Lots of it. He was fitted for a body cast, one that he wore for a day then "hucked it."
"It was super uncomfortable," he said. "I just laid on my bed. I was flat on my back for a month and a half. It seemed like forever. I was on such gnarly narcotics. But pain is good. If you feel pain, you are still in the game."
And Gumm is still in the game. Recovered, he's ready to return to Oklahoma for another shot at setting the world record for the longest motorcycle jump. He was attempting 315 feet when he wiped out. He issued a press release in early December announcing he will return June 16.
"I'm going back to Miami," Gumm said. "I'm gonna smash it. I told everybody I coming back out. I was taught as a kid that you get back on the horse that threw you. I do what I say. That's my word."
Word spread on Gumm's crash fast. It quickly became the number one viewed video on CNN.com for a day. Fans sent him papers from Australia and the Czech Republic. But before Gumm returns to Oklahoma, he has another jump lined up.
"The big one is now in March," he said. "I signed a deal with a company to jump the Grand Canyon."
To be exact, a 250-foot gap with a 2,000-foot drop. Gumm received a call from a promoter gauging his interest. It was a short conversation.
"Of course," Gumm said. "That's what I want to do. I'm a daredevil. I've always wanted a picture of something like that."
Ironically, Gumm is afraid of heights.
"What did I get myself into?" Gumm asked.
He's been practicing jumping gaps at the dirt lot next to Saddleback Church. Gumm's meticulous when it comes to doing his homework.
"I can't take anymore crashes," he said. "My poor wife, Erin."
Risks, on the other hand, he'll keep taking. Besides the Grand Canyon and Oklahoma jumps, Gumm is in the midst of working out the details for a jump in Lake Placid, N.Y. He would be jumping off the ski jump used in the 1980 Winter Olympics.
"If skiers are going 400 feet," Gumm said, "why not on a bike?"
The possibility has Gumm excited. He said it would be his "crown jewel," if not the Grand Canyon jump.
"There's things I haven't got to accomplish yet," he said.
Gumm hasn't been back to the doctors since receiving his body cast. He's said he feels normal again.
"There's no better doctor than yourself," he said. "Your body tells you so."
Three months after his crash, Gumm was on his bike again. He was a judge on the reality show "Camp Crusty." He filmed two seasons.
"Things were so out of control," Gumm said. "Halfway through they stopped it."
The producers eventually started it again. Next, Gumm did a promotional ride for Etnies and Harley Davidson on Fuel TV for two weeks before leaving the tour.
Gumm also rode in the Baja 1000 in November. He rode a 330-mile stretch. He had the Desert Assassins motorcycle team in the top five when he handed the bike off at Mile 771. However, the next driver got a flat and quit, unbeknown to Gumm.
"I was at the finish line waiting for the bike the whole night," he said.
Needless to say, Gumm was disappointed the bike didn't make it to the finish line. He had hit up all his sponsors and they had thrown $25,000 into the bike. Gumm personally wrote apology letters to his sponsors Service Honda, Lost Energy Drink, Kush Cash, Alpine Star, FMF, Hammer Head, Hoven goggles, Troy helmets and Nichols Racing to name a few.
Gumm already has his sights set on the San Felipe 250 in March. And ultimately, Gumm would like to win the 1000.
He'll have to wait until next year. By then, who knows, he might have completed three more of his goals by jumping the Grand Canyon, setting a world record and launching of a ski ramp.
"To any little kids out there," Gumm said, "keep after your goals. Try, work hard at it and you can succeed."
Posted by black e media at 6:20 AM Links to this post 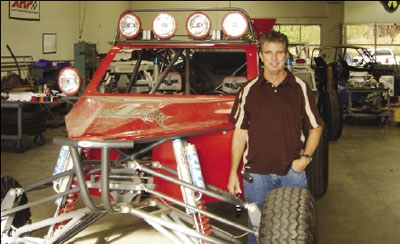 Sacks wins first place in his class in Baja 1000

It was the middle of the night and headlights glared off dust and fog on a southbound dirt road in the Baja peninsula. His team was in third place when Canyon Lake resident Chuck Sacks got behind the wheel of a Class 5 VW Baja Bug over 370 miles north of La Paz, Mexico, and headed for the finish line of the 2006 Tecate SCORE Baja 1000.
He was among over 431 entries from 38 U.S. States and 11 countries competing in 27 Pro and six Sportsman classes for cars, trucks, motorcycles and ATVs in what is known among off-road racing enthusiasts as the “big daddy” of races. And he wanted to win!
For more than two hours Chuck and his navigator drove through the pitch blackness, sometimes so blinded by fog and dust they relied entirely on their GPS system to guide the way. They experienced minor mechanical problems that were quickly repaired by chase crew mechanics; and along the way they passed up the No. 2 and No. 1 cars.
Dawn broke over the dusty Baja desert and 60 miles from the finish line they knew they were in first place. Word quickly reached Chuck’s wife, Debra, who was at home in Canyon Lake, spreading the news to all their friends by e-mail. After traveling over the top of La Paz Mini Summit, Chuck ended his bone-jarring drive at the finish line on the outskirts of La Paz, where the locals gathered for a giant all-day fiesta.
His team finished first in its class, and even more significantly to Chuck, 29th of all the 4-wheel entries. In a race where only 54 percent (234 vehicles) were able to reach the end of the grueling 1,047.8 miles course, it was a major accomplishment.
The next day, SCORE held an awards ceremony on the beach in La Paz, where Chuck, the other two drivers, Chris Bowman of Upland and Jerry Longo of LaVerne, along with their navigators and chase crewmembers were feted for their No. 1 finish. The top finishers in every class, as well as the top finisher overall also received awards.
Five months earlier, Chuck’s story was a little different. While competing in the Baja 500 in June in his personal car, a SCORE Lite Class 12, his car blew an engine and he was unable to finish. It put him out of the SCORE series points competition so he wasn’t planning to participate in the Baja 1000.
Earlier this fall, however, Chris Bowman invited him to drive for his team and Chuck jumped at the opportunity. This was his fourth time to compete in the Baja 1000. Based on his occupation as the owner of California Skier (the Mastercraft dealership located on Collier Ave. in Lake Elsinore), it would seem more likely to find Chuck competing in water ski tournaments – and he used to.
But for the past six years he has been racing off-road after hooking up with Brent and Brian Parkhouse of Long Beach. And desert dust, rather than lake water, now runs through his veins.
A week before the race was held on November 15 to 18, Chuck, his navigator, and a chase team traveled to the Baja peninsula as “pre-runners” for the final one third of the course. They carefully mapped the terrain on their GPS, taking special note of features that would affect their course. In the 100-mile stretch, they mapped 77 places where they would cross running water, standing water and washouts – the result of a storm that washed across Baja a few days earlier. According to Chuck, pre-running was a crucial but fun aspect of participating in the race.
A SCORE website points out that in the 39-year history of the Baja 1000, this was the 32nd time the race started in Ensenada and the 17th time it has finished in La Paz. It has started three times in Mexicali, twice in Tijuana, and once each in Santo Tomas and Ojos Negro. It finished in Cabo San Lucas in 2000. Mexicans love the race and close down the town wherever it ends for a giant fiesta. It’s a fitting finish for the off-road warriors.
Posted by black e media at 6:27 AM Links to this post