Championship Offroad Racing comes back to Chula Vista this weekend!

CHECK THIS ACTION OUT!

Not as lucky as previous years, when all the CORR racing was in Chula Vista, the South Bay of San Diego and Baja, Mexico are a-Buzz over Big-Time off-road racing, it's back! Starting Friday, there is action packed schedules and walk-thru pits and drivers ready to mix it up with the public, at a different venue.

In past years the track was on Otay Ranch, old-timers will remember the old cattle ranch days.

This year, its located at the State lock-ups namesake. Rock Mountain. The gravel and rock pits, south of the old track and reached by the Main Street/Auto Drive 805 Freeway interchange, in Chula Vista California. To make it easy for all you youngsters, its right across the street from COORS ampitheatre. That's easy enough even for desert racers to find!!!

For all the details go NOW to the OFFICIAL CORR WEBSITE


Posted by black e media at 8:05 AM Links to this post

One person killed during Baja 500

One person was reportedly killed overnight during the racing of the 40th Baja 500 near Ensenada, Baja California, Mexico.

Chris Lokken, affectionately known as "Mr. Nibbles", was tragically taken from all of us on June 2nd, 2007. He was killed while participating in one of the most prestigous off-road races in the world, the SCORE Baja 500 in Ensenada, Mexico. Chris was filiming on board a chase helicopter during the first few hours of the race, after which he was the co-driver in a Class-1 race car, #157. #157 suffered a mechanical failure near race mile 197.

Chris hitched a ride in a passing race vehicle, Sportsman Truck #1505, in an attempt to get to a nearby checkpoint. Shortly thereafter #1505 lost control while negotiating a steep incline and rolled over, off the steep hillside. Chris was thrown approximately 100 yards to the bottom of a ravine where he died instantly from blunt head trauma.

Chris had a genuine good 'ol boy Southern-hospitalilty personality, having spent much of his young life in Alabama. He embraced life and everything it had to offer. There will forever be a large hole in the lives of many people now that he is gone. Chris was loved by everyone he knew. Chris enjoyed many, many outdoor activities. He was an integral part of a large group of friends that camp and ride throughout Southern California. Chris will always be remembered as an easy-going, fun-loving guy who was the life of any party. He was intelligent, funny, charming, and boisterous.

Chris was the CEO of Red Belly Racing, an upstart company recently founded by a small group of friends dedicated to off road motorsports and the family oriented lifestyle associated with it. Chris took on this challenge like any other, he jumped in with both feet and gave it 110%. Above all else in Chris' life was his devotion to his family. Chris is survived by his lovely wife Megan, and his infant daughter Lauren who are in the greater San Diego area.

Chris was an excellent father, the birth of his daughter being one of the highlights of his life. Megan always supported Chris in persuing his dreams. At one point during the Baja race Chris called her just tell her what an amazing time he was having.

A Wells Fargo bank account, and a PayPal email address link, has been established for the purposes of collecting donations to benefit his family. All existing Red Belly Racing clothing will be sold and/or auctioned off with ALL proceeds going directly into this account.


REPORTED UPDATES ON THE STORY

His name was Chris Lokken, he was the co-driver in car 157 of Red Belly Racing. They broke down at RM 195 and he hitched a ride down the course in sportsman truck 1505, evidently to Baja Pits at RM 208. Unfortunately 1505 left the course, likely in the night fog and rolled down a steep embankment at RM 197. Chris was in the back of the stretched cab race truck where there were no belts or seats, per reports. The 1505 driver and co-driver were uninjured. Chris was pronounced dead at the scene. Chris Lokken was identified at the awards ceremony in Ensenada on Sunday, by SCORE officials.""

""The 157 car lost trans lube early in the race. They fixed the leak at the first baja Pit. Carlos at Baja Pits told them to put it in the trailer because he though the trans could fail later.""


""The victim had his race vehicle break down and he stayed with the vehicle while the driver went for help. He hitched a ride with a 1505 truck and here is the rest of the story...""

""Yesterday I was told by one of the crew members that this guy had basically had a nervous breakdown when he found himself "stranded" out on the racecourse. He went against the advice of the driver and started hiking out to check #2.
Apparently #1505 did not want to take this guy, but he threw such a fit they gave in. Then when they got stuck on the hill climb, they told him to get out of the truck but the guy refused because he was afraid they would leave him there. It was supposedly quite a fight, and again #1505 gave in to his "demands" and let him stay in.
Then the accident happened. He was NOT in the extra cab as some stories have told. He was in the rear bed area.""

""the car had a tranny (?) issue and they wanted to send somebody out for some reason
the F-150 of 1505 Mike Jenkins, Foothill Ranch, Calif./Robert Anderson, Laguna Hills, Calif., Ford F-150 w/a third seat 1505 is Bob Land's son in law (he told me this) this guys gets in
does not: buckle up, no helmet, the F150 gets stuck in silt, backs up ... is on ridge line (this is before Check 2) drops wheel off side, trucks tumbles and rolls and rolls WAY downslope ... hundreds of feet, guy in back gets pitched out""

We had an EMT in our pit, saddled him up with Brad Kilby, in Kilby's JK, and dispatched them to the scene. My wife, Machelle, is a certified CPR instructor, she was giving the guys from 1505 CPR instructions over the radio. Unfortunately when our EMT got there, he pronounced the victim as deceased.

Kilby got the driver/co-driver from the 1505 car back to BFG pit 2. Seems the 1505 guys found the co-driver from another vehicle walking the course, evidently headed for check 2, the trans on their car was out, for whatever reason their radio did not work. The crew from 1505 said the other vehicle's co driver virtually begged them to give him a lift, eventually they agreed. The other crewman put his helmet on, but did not buckle it, climbed in the back of the 1505 car, no seat belts, etc.""

""The guy that had died was in the back extra cab but the seats had been taken out due to storage for race supplies. Rob did not want to take the person in the truck but he insisted on going so that he could be dropped off at check two so that he could radio to his team that there car has broke since they had no radio contact. Truck rolled while trying to back down a hill when on rear wheel came off the edge and sucked the truck down the hill. Guy in the rear was ejected out of the back window during the roll."" This report of the story was reported as false.

1505 was trying to climb a loose hill (Kilby said it was like trying to climb a steep loose hill at Truckhaven), car did not make it on the first attempt, so they were backing down to try again, backed off a cliff, car rolled hard several times into a deep ravine. Crewman was ejected, and possibly killed immediately from our EMT's report.

SCORE went to a discreet channel to figure out what they were going to do, heard the Weatherman trying to get all of the chase crews from ** back to Ensenada. Kilby passed the *** car and talked to the driver going in and coming back, but did not relay the news about his co-driver to him. We saw two of their chase rigs going up to get the car/driver just as we were headed out."" 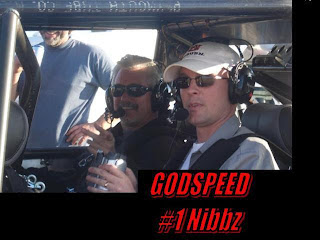 Baja Racing News was the first to report this story. We extend our prayers.
Posted by black e media at 2:43 AM Links to this post