The first reports that came in were that Team Ruffo was OUT OF THE RACE by 11:15 AM yesterday and back at the shop, repairing. The prep chief repairing? Tecate is a solvent! 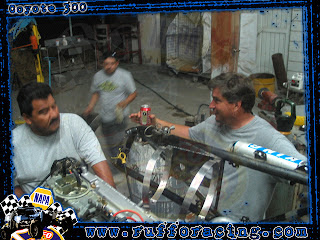 Another BIG story today, Team Jimmie Jeffries Class 1, #188 not being on the list of runners, prior to contingency raceday, did enter and run. The Class 1 Battle for the win. Lately, the Class 1 Teams of Southern Baja have spent huge amounts of treasure and time on being the best team, overall and in the Class 1 competition.

Team Ruffo is the current points leader in the Desert Racing Series of Baja Sur. Ramirez wants some respect. Over the years, Team Ruffo has shown its depth, experience and course knowledge as the superior off-road racing team in Class 1, in southern Baja. Team Ruffo is the PRO BAJA Baja Sur Desert Series 2006 Champions.

These experienced desert fighters cannot be counted out, with just one mistake on the Ruffo or Ramirez teams, Barry or Quade can easily walk away with the win. That's what makes this Class 1 battle so BIG. Lots of good runners, equipment and a classic race course.

Team Jimmie Jeffries and the rest of the field

Zambrano, Flores, Manning and the Team Jimmie Jeffries also have the right people and equipment to win this race. However, Ruffo, Ramirez, Barry and Quade are world class runners. They could beat anyone, anytime. Even the famous Terribles Herbst team would be hard pressed to defeat the famous runners of Baja Sur, on the dirt of the southern cape of the worlds longest peninsula.

Any team can take this race. The weather this morning is clear and hot inland, but cooler along the Pacific coast. Temps will reach 105 degrees F. This is a fast course, lots of maintained ranch roads and well established race course trails. All Surenos know, Baja Sur is the land of the ancient ones, the ones who know the land and know the course, will be victorious today.

Thanks to the Red Duck racing team, here is a quick market on how the great fans of Baja Sur are betting on who will win the great battle for the crown of the COYOTE 300.


102 runners and 40 Motos ready to race this morning. Here is the confirmed list of CLASS 1 runners:

Ruffo Class 1 Team prepares for the battle of the 13th running of the traditional race of La Paz, the COYOTE 300, Sunday morning. 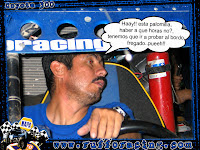 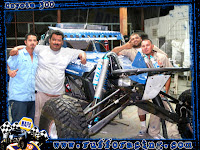 Team Ruffo ready to win the COYOTE 300. With race preparations mostly finished for Team Ruffo, the great team is anticipating to win the class on Sunday.

More details have become known about this story. An online video has circulated in the last days showing the Jimmie Jeffries Team prepping for todays running of the COYOTE 300. The #188 Class 1 of Team Jimmie Jeffries is expected to run on Sunday.

With the Big Circuit Bronco Race and Baja Sur 500 in September and the Baja 1000 to San Lucas, there is alot of great southern Baja Mexico racing left in the schedule.

The fans of offroad in Baja Sur, "The Home Of Offroad", will have a historic rest of the series and offroad season, with the Baja 1000 on the way for the best fans of the world, Surenos!

Baja Racing News has learned that many racers are going to race the final two races of the season, that may not have participated in the start of the season. Todays COYOTE 300 and the CABO 500 will see more local racers, than earlier season contests.


Luis Ramirez of the Los Cabos team Jeffries has been shopping in the United States for his boy "Fito". Reportedly, Luis Ramirez met on Monday with a represenative of CABO 500 TV for in-car cameras for the CABO 500 scheduled for September 29.

Really, he's shopping to promote Jeffries in the US. The in-car cameras might put Fito in the offroad spotlight. But, the last time that happened, now a fellow teamate, said Fito folded under the pressure.

The in-car would document Fitos attempt to win a point-to-point desert race, which he hasn't done. Jeffries has won one track race in San Jose, BCS., but his attempt to win the CABO 500 2006 last April, ended when he ran into a ditch, during the competition with Danny Anderson for first place. Anderson went on to win with over an hour between the next competitor.

During that race, a future team member Jim Mihal commented, "Yea, Fito got psyched out with all of the pressure from me and Danny and he drove himself into a ditch". Later in 2006, after Andres Ruffo crashed and totaled the Mihal Class 1 in the Devils Dry Lake during the 2006 Baja 1000. Mihal, early this year teamed with Jeffries and placed in the Baja 500 several weeks ago.

Mihal and Fito will run the Team Jeffries Class 1 in the CABO 500 in September. Mihal has sent out emails in the United States promoting Team Jeffries:

UPDATE Here is the mass-mailed email from April 23, on the SmackDown of JIMCO and Robert Ross:

""Hi 'deleted',
Ross was defeated by Fito today at the San Jose short track. I guess the
Jimco crew was there supporting Ross, but Fito took no prisoners. Fito
also took the overall, beating all the trophy's including the one Robert
Ross drove.
Jim""

No Mass-mailed emails from the same source, Jim Mihal, have been received promoting Team Ruffo.
over his work with Team Ruffo in La Paz. Reportedly, Mihal has downplayed his role with Ruffo. Luis Ramirez was also in the States shopping at Fortin for a new transmission.

Click on the TOTALLY MOTORSPORTS LOGO to link with the podcast of the show!

This morning, from 9 to 11 AM, ESPN 800 San Diego will broadcast LIVE about Off-Road!

Broadcast and Webcast to the Off Road World from the "Q", the Home of the San Diego Chargers, wildly popular San Diego Radio Host Dave Stall, will entertain with Off Road Guests, Steve Myers with IRC International Racing Consultants http://www.racetheworld.net/

Or TUNE IN TO ESPN RADIO 800 AM, Broadcast to the Off-Road world.
Posted by black e media at 6:00 AM Links to this post