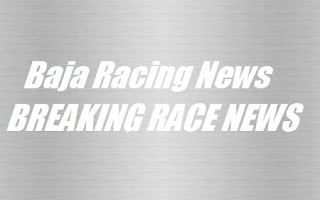 EXCLUSIVE! UPDATED!
HERE IT IS, CORR ANNOUNCES PRIMM! You heard it first at Baja Racing News.com
Newport Beach, CA (July 20, 2007) — Championship Off Road Racing is excited to announce the 2007 season finale race weekend will take place at the brand new Las Vegas International Off Road Raceway in Primm, Nevada. With what has been a truly ground breaking season for Championship Off Road Racing it is only fitting to end the season at one of the most thrilling tracks CORR has ever built. The location will give CORR the needed space to create a track worthy for the 2007 Championship battles.
With the point’s race tighter than ever before, the season finale will be the battling grounds to settle feuds, start new ones and crown the 2007 Champions. Will Jerry Whelchel, Carl Renezeder and Rodrigo Ampudia still be leading the point’s standings in their respective Pro classes when CORR arrives in Nevada? Fans stay tuned; anything can happen. The dirt will fly again when the action packed ride of CORR returns on September 15th and 16th at the Antelope Valley Fairgrounds in Lancaster, CA.
Don’t forget about the second annual Jason Baldwin Memorial Cup race, which takes place at the finale in Primm, Nevada. The race pays tribute to the highly recognized driver Jason Baldwin and his contribution to the sport. Pro 2 and Pro 4 drivers compete throughout the year in seven separate races to qualify in the winner-take-all cup race at the end of the season. In the finale the two classes will be racing against each other, battling it out for a $66,000 purse and the prestigious Jason Baldwin Memorial Cup.

Confirmed! Baja Racing News reached a source late tonight, that confirmed, CORR will announce, after the Terribles Cup this weekend, they will have their Nevada event at the new "Terribles" Primm Valley, newly built off-road racing facility.

Yes, CORR will be at PRIMM. But, there's another story, this weekends Terribles Cup at the LVMS, will be THE LAST! All of SCOREs Nevada short course events will be at Terribles PRIMM VALLEY! Another EXCLUSIVE Baja Racing News.com Story!

Terribles Primm Valley will be an impressive facility if a short course and long loop course are envisioned and completed. Our inside source confirmed these plans.

Even though the following quoted information is posted on the CORR website! Chris Blair confirming the next event is still going to the LVMS!

""Yes, they are on our schedule and we have a verbal agreement.
Chris Blair
Vice President of Racing Operations
Las Vegas Motor Speedway""

Tonight, Sources close to the Terribles Cup and Championship Off Road Racing, intimated
that CORR will be making a big announcement regarding the Nevada area venue for its next scheduled, Vegas area CORR event, as early as next week.
The Primm area was also discussed as a possible venue for CORR racing events. More loading...
Posted by black e media at 7:45 PM Links to this post

Terribles Cup, the GUT CHECK of the 2007 off-road racing season

Baja Racing News.com has reporters in Las Vegas for this weekends Terribles Cup. SCOREs answer to CORR Championship Off Road Racing. Clearly, CORR is the future of the Sport of Off Road and with tons of teams making the jump to short track stuff, from desert racing, we are prepared to follow our off road heroes, as racing budgets shrink and the rich and famous who cut the checks for the teams grow old and tired, be prepared to spend more time on short track racing.

Yes, desert racing will survive, not without some tremors in the business. The old and established west coast racing standards are about to change.

Primm is evolving to "Terribles" standards, which will be great to see! CORR will capture more teams and SCORE and BITD will be forced to evolve. Beyond the carnage the racers will endure this weekend in the WWF form of the sport, more of our favorite teams are ending up spending less and going around in circles, slamming into each other.

Until then, we all hope the wind and flying dust of Vegas ends up with another sorting out of the great racers of off-road. The lucky winners, standing atop the podium, with the fabulous dancin' gals of lost wages, trophies and cash in hand! Let's go racin'!

What happened to Ruffos Team at the Coyote 300? Baja Racing News.com EXCLUSIVE
The big question about the Coyote 300 was what happened to the Team Ruffo Class 1? They were out of the race as early as 11:30 AM with reports of transmission and/or clutch failures.
Reportedly, the story is now in, Jim Mihal drove into a bush and ended the race for the Ruffo Class 1. Ruffos, who were the series leader is now at risk of losing the series championship defense from last year.
Jose Lima, La Paz reporter. 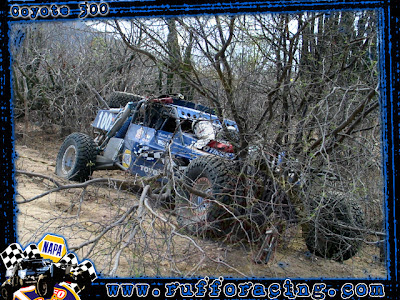 Posted by black e media at 3:26 PM Links to this post