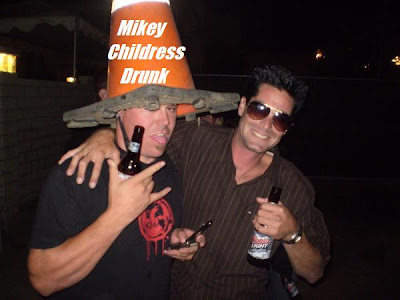 Here's the press release announcing the Mikey Childress, self described as "The Motorsports Machine".

Here's more useless stunt stuff going on in this economic depression, with washed up racers willing to suck it for tire companies like General Tires. General Tires, the same company paying off pit services in Mexico, the same company with all the reported flats at the Baja races. Goodbye real desert off-road races. 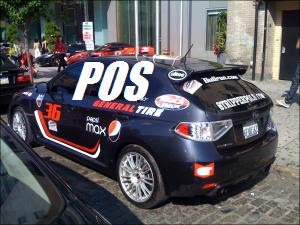 "Mikey Childress will represent Team General Tire in the 2009 Bullrun Rally. Kicking off July 10, 2009 in New York City, racers will take off on a seven-day automotive rally and cross-country party that ends July 17th in Austin, TX.

Some 100 celebrities and car-heads take part in the “luxury lifestyle” rally event. The remaining rally locations over the seven days remain a mystery but Bullrunners can expect to swing by some incredible cities on their way, with a party each night when they reach the day’s destination.

“The Bullrun is one of the most glamorous rally events, combining bona fide racers with celebrities and drivers from around the world,” said Dana Zamalloa, manager of public relations and communications, General Tire. “Mikey is an incredible racer and we know he’ll represent Team General Tire well at this event."”

Another Story on Childress
from October 2007

The Flat tires of General Tires steps up to sponsor the guys who drive into Baja ditches. The Story.

The #7 Fabtech Trophy Truck now changed to General Tires is teamed for this Baja 1000 with off road race stars Scott Steinberger, Stout Industries and Mikey Childress. Mikey said, "The three of us are going to team up and try to tackle the baja 1000. I'm totally stoked and I cant wait till race day. I wanna thanks Scott for giving me a chance to be part of the team and letting me drive such a awesome truck..." 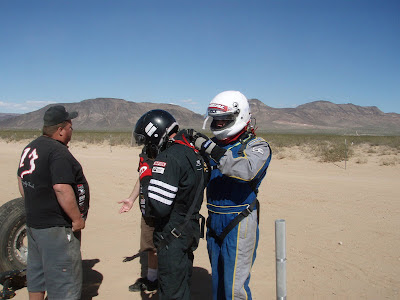 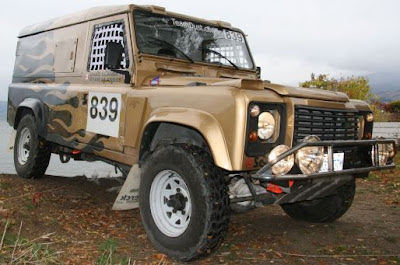 Brothers Chad and Ryan Ulansky have little or no off-road vehicle racing experience.

So as they head to Mexico to take part in the Baja 1,000, an off-road race that stretches over 1,608 kilometres (1,000 miles) and will take nearly three days of straight driving to complete, it’s comforting to know the vehicle they will drive has all kinds of experience.

The Ulansky brothers will ride in a modified 1986 Land Rover 110. Nicknamed Tazi, the Land Rover was raced extensively in long-distance off-road events in Dubai before being purchased by the brothers.

“The only thing that is experienced is the vehicle,” Ryan joked, a couple days before the two brothers were to drive to Mexico to start preparing for the race.

“My brother found this Land Rover that was prepared for rally racing so we bought it and had it shipped back to Kelowna. We had this truck so we figured let’s go and try to do this race.”

While this might be the Ulanskys’ first foray into off road rally type of racing, the two are definitely not strangers to competition.

Chad is an extreme athlete, having competed in the Eco Challenge and long-distance runs, while Ryan is a self-described weekend warrior who has competed in cycling and adventure-type races.

“It just sounded like a whole lot of fun to go down to Mexico and be involved in the race,” said Ryan, when asked why they were doing it.

“To be able to drive for two days with no speed limits sounded like a perfect vacation.”

The Ulanskys will race in the SUV portion of the Baja 1,000.

Vehicles will leave at 30 second intervals and will use GPS technology to follow the route.

While finishing is probably the main goal, the Ulansky’s competitiveness will have them looking to make up ground on anyone they see.

“Realistically it’s probably not very feasible that we are going to win anything in our division,” said Ryan.

“But we are both mildly competitive people so when we are there and driving we are going to pass any car we can and keep up to anyone we find along the way.”

Both of the Ulansky’s attended high school in Kelowna as Ryan went to Mt. Boucherie and Chad attended Kelowna Secondary.

The pair will be joined in Mexico by their parents, as supporters, and hope to meet up with their support vehicle two thirds of the way through the race for supplies.

This weekend the local pair left for Mexico where they are able to scout the course before the start of the race Nov. 13.

Posted by black e media at 2:02 PM Links to this post

Through a rough and rocky season with many top competitors, the Gasper Brothers and their CATTRAC / Porter Class 1 car remain focused and strong. The SCORE Class 1 race division is one of the most competitive classes, with close to 40 Class 1 teams starting in a single race. The teams race for the finish line trying to earn a top finish, as well as earn points for finishing each race within the designated finishing time limit. Both Billy and Dave Gasper drive the CATTRAC / Porter Class 1 car in the 2007 SCORE off-road series. The CATTRAC / Porter Race Cars team has secured the lead and is currently ranked 1st for the 2007 SCORE points championship, in the Class 1 division.

The Gasper Brothers, along with the entire CATTRAC / Porter Race Cars team have their sights set on winning the 2007 SCORE points championship, as well as possibly securing a win at their next race, the world famous Baja 1000. Although both brothers are anxious to get their hands on the 2007 SCORE points championship, this will not be a first for either. Billy and Dave Gasper have secured the points championship twice prior, and have both won the Baja 1000 twice. In the same camp, crew chief and Porter founder, Danny Porter has won the points championship once, as well as won the Baja 1000 twice as a driver and twice as crew chief for Rod Muller. "We build the best cars, and we want to prove it by racing and winning!" stated Danny Porter.

The CATTRAC / Porter Race Cars team would like to thank their sponsors and support crew as well as all those who have helped make their accomplishments possible.

Posted by black e media at 11:52 AM Links to this post 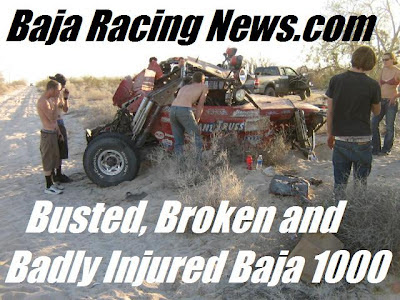 Your rig is broken, you've somehow broken a bone(s) and you feel as though you are moments away from going into shock. Like you are going to pass out and maybe never wake up.

This is when your medical emergency preparedness will make the difference between life and death.

Firstly, an automatic satellite service notifying of your crash would be the best of all worlds. A number of such services are available. Many can't afford such services and many more don't even know about the services because the sanctioning bodies of racing may not promote the service. Contact us Baja Racing News.com at safari2002@cox.net for more information.

Secondly, you must know your teams communications capabilities and be able to rely on them. They must know how to relay the situation to Weatherman, BFG relay, SCORE Ops (Operations) and onto SCORE Medical (Emergency Medical Services).

Fourth, lets say you can't reach Weatherman. Your next best shot for help is via the BFG radio relay, get their frequency have it loaded and know how their radio net works.

Fifth, lets say the first four don't work. You must now reach the nearest SCORE checkpoint or Pit Service. You must know where you are and your nearest possible radio relay for help. You must have preloaded all of these frequencies into your radio and have the ability to reach one of them from your location. Ultimately, word must get to SCORE Medical so that they can dispatch assistance to you.

Sixth, this is a long shot, but at times, it works. Preload local emergency frequencies, Red Cross, Federal Highway Police, etc. This network may be your only shot to communicate your situation.

Seventh, you may be forced to relay your situation to a passing racer. Try to communicate this info in writing.

Finally, you should have onboard your rig, emergency gear appropriate for your venture and know how to use them.

At this point we want to salute Rod and the great team at MotorsportsMedical.com and their dedication to the sport of off road and their work for SCORE International for the Baja 1000 this November. They have stated they will have 13 ground teams, 2 choppers with doctors and one fixed wing, at the ready.

Please contact them to help prepare yourself for your adventure in the Baja 1000.
Good Luck Teams and God Bless all the medical emergency people for this years race.