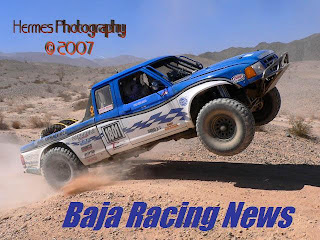 The first race of the season is the Superstition Plaster City West race, scheduled for February 16. The local race is out on the low desert, just outside of El Centro, it's a great primer for desert racers at the start of the racing season. The beloved original organizer, Fud, will be remembered at the start of this season.

The Baja 250 is back in San Felipe this year! March 14-15. The favorite of Baja racers everywhere, won't have any spring breakers but, it will have what Baja racers want this year, no Ensenada. From the Miramar Bar to the famous whoops, Baja Racing News.com will cover this race, LIVE!

The Alamo 200, a favorite of the locals of Ensenada, Baja Mexico, will run its traditional route near the coastal range of Baja Norte, a fast race, it'll be over in less than six hours. Contingency in downtown Ensenada.

The new Mexicali 500, September 28-30, will run from Mexicali to San Felipe again this year. Contingency in Mexicali on Friday.

The Baja Night Race will run May 18-20. Contingency in Mexicali and the race runs just west of town throughout the dry lake and low desert in the shadow of the sierra's. Warm desert nights and families from all over Baja Mexico, make this a local favorite.

The Baja 500 this year is scheduled for May 30 -June 1. Another Baja Racing News.com LIVE event. Back in Ensenada for the first time for American racers, since all the crime stories of last years, Baja 1000. A loop race located around Ensenada, Baja California, it's becoming well known for its commonplace criminal activity.

The Summer race, Ensenada to San Felipe, a desert race tradition, runs from the Pacific coastal town of Ensenada to the desert outpost of San Felipe, many teams end up running for hours through the coastal sections, mountain passes and the low desert into the Sea of Cortez coastal hamlet San Felipe, at night.

The Baja Gran Prix will be August 1 and 2. The race is located in the pinon mountains, the high country of Baja Mexico. The smuggling ranches of Jacume welcome hundreds of fans and racers between Tecate and La Rumorosa.

Another traditional Ensenada race, the San Vincente 200 in August, the course runs around the agricultural community of San Vincente south of Ensenada, through the coastal ranch country. Lots of open country. Think central California fifty years ago.

The Mexicali 300, September 28-30, runs in the low Colorado Desert outside of the state capital. Still warm from the summer, this race welcomes local racers from the Mexicali Valley. The course is a loop race starting and finishing in Mexicali, Baja Norte.

Back to Ensenada. This years Baja 1000 is a loop race starting and finishing in Ensenada. Covered LIVE by Baja Racing News.com.

The third annual CABO 500 is scheduled for November 29-30. This years race is a loop race, starting and finishing on the beach in Cabo San Lucas, Baja South.

The San Felipe 275, another Ensenada to San Felipe race, will run in December. From the Pacific coast crossing the Baja peninsula to the desert coast to San Felipe. Contingency in Ensenada on Friday.

The Dezert Cult will crash the dash, one of the longest running Superstition races in the low desert outside of San Diego, California. This race runs near New Years day with local desert fanatics, out in force! The traditional season finisher for years.

Skull Helmet Flying off the shelves for Chrustmas! The NEW Santiago Choppers Skull Helmet of perfect for that light duty moto ride on Christmas Day with your new Bike!
Listed at a discount and rolling of Santiagos shelves, this hat is great for around town or your next Raider football game. Here's a link to the order page. Baja Racing News.com
Posted by black e media at 11:03 AM Links to this post 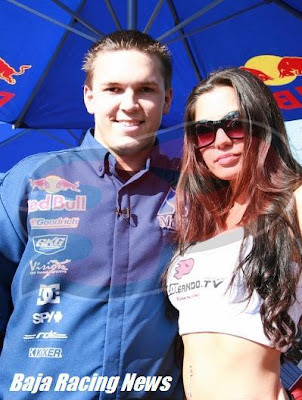 San Diego, CA - Many veterans of the world famous SCORE Baja 1000 race were saying this years contest would be the most grueling in recent memory, and that proved to be true for more than one competitor. For Andy McMillin, it was mechanical issues that plagued him right from the start. Andy lost his alternator at race mile 78. Because of the unexpected location of the problem it took chase crews over two hours to reach the immobile truck with the replacement part. Once the number thirty-one McMillin/Red Bull Trophy Truck began moving again they regained some ground, only to suffer the very same problem. Troubleshooting revealed an apparent wiring issue, which was fixed quickly. The McMillin team battled the Baja terrain and even a few booby-traps before the truck was stopped again near race mile 980, just passed Loreto, with a failed transmission. After spending three hours swapping out the transmissions, the McMillin/Red Bull Trophy Truck once again began moving towards the finish, finally crossing the finish line through the Red Bull arches at 1:30 am Thursday morning with an official time of 38 hrs and 22 minutes.

"We had a little bad luck right from the start, but we didn’t give up. We got to the finish. In my eyes anybody who finishes this race is a champion. I want to thank my crew and the other drivers. They stayed and slugged it out with me to get the finish. I couldn’t have done that without them. Will be back next year ready to win!” stated the unfazed McMillin. Andy’s uncle, Mark McMillin finished 4th in Class 1 and 8th overall, and Andy’s cousin Daniel managed to also finish 4th in the highly competitive 1/2 1600 class.

Andy has stood up and is now leading off road racers to demand action on the part of SCORE in Mexico, relating to the crime wave covering Baja California. The Hall Family incident and many other reports of crimes against Americans in Baja Mexico, is now widely recognized as a serious threat against international travel to Baja California, Mexico.

Check out Andy’s website for race results, photos and video of The Baja 1000.
http://www.andymcmillin.com/

Posted by black e media at 7:07 AM Links to this post 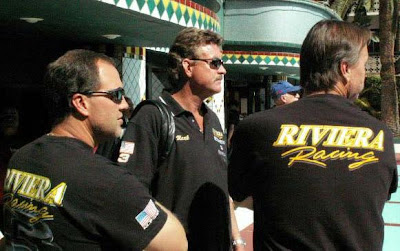 "Do I have a story for you!", the local Cabeno told me. "It's about Money, Land and Racing!", he continued. My source is one of Cabo's 'Loco Miguels'.
A few years ago the Cabeno saw an advertisement in the local paper, a large chunk of San Jose del Cabo coast, Los Cabos, Baja California Sur, Mexico. So, I got some of the details about the parcel, it was on sale right at the time the coastal properties were going like hotcakes. Room rates were up and local room construction in the area, was lagging.
To my amazement, the price was right! Far below real value. I suddenly remembered my friend, who, awhile ago, after a social at an east cape hotel, was going to fly his new plane off of the hotels strip. There is a long history of local ranch owners and visitors flying after 'a social'. That's how the Buena Vista resort was sold off. Herb Tansey had too many rum & cokes one day with a friend at his resort. And flying against my advise, he crashed, killing himself and a friend. The resort was sold off later. Too bad, great location, world famous resort, gone.
Yes, I recalled that afternoon when that American was about to fly off the strip, over the Sea of Cortez, then off to parts elsewhere. When I thought about the hotel owner of the strip, saying very clearly, "someday someone is going to kill themselves on my strip and I'll have to close my air-strip. One of the last open airstrips for Americans to fly their private planes to, in Mexico. Just like in Baja's glory days, when Desi Arnaz, Bing Crosby, John Wayne and many others frequented the cape of Baja California.
Bing Crosby, in particular, frequented one ranch to go 'dune buggying' with his daughter to look for local fossils and tool around the local environs. The Hollywood elite loved the Cape, Cabo. The fishing, the hunting and they could live freely. No FBI microphones. Never underestimate how badly the big movie stars needed to 'get out of the country', to get away from J. Edgar Hoovers tape recording efforts in the late fifties and throughout the sixties.
The resort owner complained about it often. Many small mishaps over the years made the resort owner wonder, when will it happen. The resort had been open since the early sixties. Well the American revved his engines, it was his new plane, and was heading down the runway, when a local Mexican truck barrelled right into the path of the plane. The accident was horrible, the plane with all its forward energy would have been totally destroyed, if the cement wall at the far-end of the runway would have been finished. A classic Mexican wall. Not finished.
No matter, no-one would be able to walk away from that accident.
The plane tore off the roof of the truck, crumpled itself in the corner of the airstrip, dead and smoking. We ran to the plane, to do what we could. When, to our amazement, the American flying the plane, stepped out of it like a movie star!
He survived! Walked away! Later that day the strip was closed forever, to be made into a golf course. The resort owner exclaimed for years, it finally happened, someone should have been killed, luckily they were OK, "that guy had more money than brains", he said on many occasions, recalling the day. The resort owner told me that story several times over the course of our friendship. Never recalling the name of the American pilot who closed his strip down. After hearing the whole story, maybe the truth is 'more luck'....
That's the guy who later bought the land on the beach in San Jose that I suggested, he's building a huge resort that'll open this winter, he got a steal of deal and dammit, "I never got the commission amount I should have"! As I listened to the Cabeno, he later asked who won the race to Cabo this year. The Baja race came to Cabo this year, only for the second time in its history. I told him the name of the sponsor and he made nothing of it. But, when I mentioned the name of the driver of record, the cabenos eyes glowed and his tale took on a whole new life.
A name to the old story of the American whose accident closed the resort airstrip, once and for all. After many tellings of the same story without a name.
The pilot of the crashed plane and the buyer of the prime beach land was Mark Post!
When asked about this tale in Cabo, on a warm afternoon in Mexico, on the beach at the office, after Mark won this years Baja 1000. The 40th running of the race. I asked Mark, he smiled brightly, shook my hand strong like a Baja cowboy and said, "Yes, that's me, off-road saved me, off-road racing saved me". He moved off into the crowd of Herbsts, Baldwins and Gordons and the like, to enjoy his Baja 1000 victory with friends.
The same guy with the handcuffs in the last Baja 250, 'Above The Law'!
The "Above The Law", Black Champion of 2007, Riviera Racing's, Mark Post.
Baja Racing News.com EXCLUSIVE
Posted by black e media at 3:41 AM Links to this post