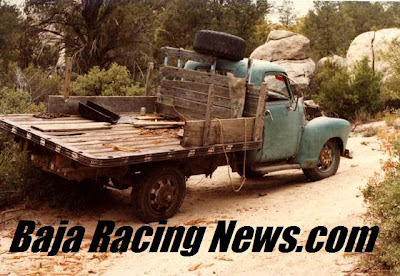 A Baja Racer continues on
Sergio Vega has demonstrated for more than 20 years, that he is made up of strong racing stock. The Mexican moto rider in Baja racing, that in spite of not counting on as much sponsorship or support as the great equipment teams like Honda or KTM, but its category there this.
The "KP" trains for each event that participates as if it was a Baja 1000, with much dedication, as much in the physical aspect, like in the mental thing, added to many hours of route in the zones that will be on board of its motorcycle. Lamentably for Vega, all the opportunities did not transpire, like new American equipment. Since American quality equipment was a goal the team sought for years. But, the equipment that been sought, has escaped Vega, he declared being a proud Mexican, the new generations that are total Off-Road, always seek racing success.
The latest which I knew is that Sergio would be part of the Peninsular ones in racing series 2008 of Score International next to Gerald Rojas and David Ruvalcaba, I hope that there is not change of plans, since with that alignment and fitting errors that occurred in the last season, they will be fighting very surely the racing crown in Class 30. Not by anything, always I have thought that Sergio Vega is one of the three best Mexican motorcyclists in the history of the Baja racing, their merits speak in case single and its future still continues harvesting many successes.
We will dedicate the season in memory of our passed racing friends. For days back it has been speaking on the telephone with Núñez Marks, that was absent like passed pilot in Baja 1000 to be sad by the death of Erik Moral, but now, the situation is different.
Núñez told me that from December all the elements have been working very strong in the factory of Ensenada off road for which we will be seeking good racing results, in the 14th edition of the Desert Challenge of Laughlin, since the racing campaign 2008 will be dedicated to the memory of "Moralitos". Surely it will be seen him the Kiosko equipment be in the racing efforts of Class 5-1600, covering all racing performances of his friend who went ahead in the trip, as he said, Núñez Marks, "Goes by you Moralitos". Happy Trails Buddy.
2008 SCORE racing much more complicated
The 2007 were a special racing year for Score International, since they celebrated 40 years of the Baja 1000, they counted on new sponsors and racers as Volkswagen and the number of inscriptions went on the rise, in all its events, but everything went South, literally, after all the criminal stories were made public.
Sal Fish and SCORE had many bad incidents, like the number of people who were killed in the races. Off road is a sport that has risk, but in the last years racing season many teams were confused by the lack of attention of the organizers of SCORE races and the lack of interest from the local authorities.
This Baja racing season will be very complicated for SCORE, with many teams that do not think they will make it to baja for racing from the reports of widespread crime fear, many international racers do not want to travel to Baja Norte, Mexico, so that is why the 2008 race season will be a test for Sal Fish, depending in good part on his efforts.

EXCLUSIVE to Baja Racing News.com
Posted by black e media at 10:21 PM Links to this post

TrophyLite racers race away from series

TrophyLite failed to continue attracting new drivers because of the instability of the trucks they produce.

At the last race two trucks were destroyed in roll-overs before the race even started. Teams are eliminating their plans with TrophyLite.

Posted by black e media at 9:09 AM Links to this post

PARIS - An attack linked to al-Qaida and terror threats against the Dakar Rally forced organizers to cancel the annual race on Friday, the eve of the 5,760-mile trek across North African desert scrubland and savannah.

It was the first time the automobile, motorbike and truck rally has been called off in its 30-year history. In a statement, organizers blamed "threats launched directly against the race by terrorist organizations." the Dec. 24 killings of a French family and international tensions.

The race's central appeal — its course through African deserts, scrubland and savannas — is also its weak point, making it difficult to protect thousands of people as they cross remote regions.

"No other decision but the cancellation of the sporting event could be taken," organizers said.

France, where the race organizers are based, had urged the rally to avoid Mauritania after the four family members were killed in an attack blamed on a terror cell that uses the Mauritanian desert as a hideout.

Officials say the cell is linked to the Algeria-based al-Qaida in Islamic North Africa, which has claimed responsibility for a series of deadly attacks, including the Dec. 11 twin suicide bombings at U.N. offices and a government building in Algiers, which killed at least 37 people.

French Foreign Minister Bernard Kouchner said he did not want to "stigmatize" Mauritania, but warned of the risks "in a very uncertain region and one crossed by the networks of al-Qaida in North Africa."

"We simply want those who risk a lot to benefit from our information," Kouchner told RTL radio. "We are warning them: It's dangerous."

Daniel Bilalian, head of sports at rally co-sponsor France Televisions, told Europe-1 radio there had been "direct threats aimed at the race by terror groups," without specifying.

Al-Qaida in North Africa, in a Dec. 29 statement posted on an Internet site that it often uses, criticized Mauritania's government for "providing suitable environments to the infidels for the rally." It did not directly call for attacks on the race or its participants.

Rally director Etienne Lavigne only recently approved the Mauritanian stages after two stages planned for Mali were scrapped over concerns about al-Qaida's north Africa affiliate there.

The race, organized by the France-based Amaury Sport Organization (ASO), had been due to start in Lisbon, Portugal, on Saturday and finish in Dakar, Senegal, on Jan. 20. Eight of the stages were to take place in Mauritania. Some 550 car, truck and motorcycle drivers were expected.

Cyril Neveu, a five-time Dakar winner in the motorcycle category, acknowledged that the race could have been targeted by terrorists.

"It is a big caravan of more than 3,000 people," he told French broadcaster I-Tele. He said he respected the organizers' decision but added: "Many are going to be disappointed."

"Providing security from the first to the last competitor is an onerous job," Neveu added. "One cannot say that there was zero risk."

Only the father of the slain family survived the Dec. 24 attack, in a town 150 miles east of the Mauritanian capital as the family picnicked on the side of a road.

That attack was followed up be another four days later, when three Mauritanian soldiers manning a checkpoint were killed. Mauritania is a largely peaceful Islamic republic that has been rocked by the back-to-back attacks.

The Mauritanian government had announced last week that it would mobilize a 3,000-man security force to ensure the race's safety. The country's foreign minister complained that canceling the race was not justified.

"We have taken every measure to ensure that the rally goes forward without incident," Foreign Minister Babah Sidi Abdallah told RTL television station.

Posted by black e media at 7:09 AM Links to this post

Posted by black e media at 7:28 AM Links to this post