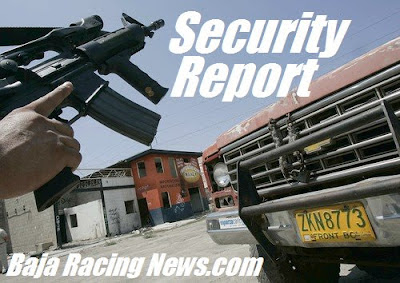 
San Diego UT
Sophisticated Mexican groups plot abductions
February 6, 2008
"Organized, well-financed and violent Mexican kidnapping cells are targeting a growing number of U.S. citizens visiting communities popular with San Diegans and other California residents. [Facts Reported by SPEED Mex/Baja Safari in December 2007]
Last year, at least 26 San Diego County residents were kidnapped and held for ransom in Tijuana, Rosarito Beach or Ensenada, local FBI agents overseeing the cases said yesterday. In 2006, at least 11 county residents had been kidnapped in the three communities.
“Some of the 26 were recovered, some were hurt and some were killed,” said agent Alex Horan, who directs the FBI's violent-crime squad in San Diego.
“It's not a pleasant experience. Victims have reported beatings, torture and there have been rapes. . . . Handcuffs and hoods over the head are common,” he said.
When contrasted to the 40 million border crossings made every year at the San Ysidro Port of Entry, the kidnapping numbers are small. Most of the victims have business interests or family members in Mexico.
But authorities said anyone planning to visit Mexico should be cautious.

“I would certainly be concerned,” Horan said.
The U.S. Consulate in Tijuana issued a travel advisory last week that said U.S. citizens living and traveling in Mexico should be extra vigilant.
Gunfights and other violence linked to drug cartels have increased in Baja California, and more Mexican citizens have been kidnapped lately.
While some of the groups suspected of kidnapping Americans are connected to drug trafficking, most aren't, Horan said.
He described the kidnapping groups as sophisticated operations similar to terrorist cells, each with a boss and clear divisions of labor. Usually, one group is involved in scouting, another carries out the kidnapping, a third holds the victim and a fourth handles the ransom.
“They know who they're going after. I think they have a list,” Horan said. “These are kidnapping cells. . . . That's what they do. They do kidnappings all year long.”
While the FBI wouldn't say what the ransom demands are, or how often they're paid, agents said money is driving the increase.
“This is not about terrorizing people or retaliating. This is about making money, and obviously this is good business for them,” Horan said.
The scenario that fits about 90 percent of the FBI's kidnapping cases starts with a middle-class family with no criminal ties, who live in communities such as Chula Vista, San Diego and National City.
The family typically owns a business in Mexico and has relatives there. At least one family member, usually a man in his 40s, makes several personal and professional trips across the border.
While driving in Mexico, this person is pulled over by as many as 10 people posing as police.
They're carrying weapons, wearing vests and using police jargon. Within a minute or two, someone is shoving a hood over the victim's head and dragging him into a vehicle. His car is left on the side of the road.
“We've had victims held for days to months,” Horan said.
Not every victim is Hispanic, but there have been “very few cases where a tourist is targeted at random,” said Eric Drickersen, who supervises the FBI's border liaison office in San Diego.
Some of the kidnappings go unreported because people fear retribution, Drickersen said.
Ransom demands are almost always made over the phone. The cross-border communication gives the FBI its jurisdiction. But the agents need authorization from Mexican authorities before they can carry out an operation across the border.
Mexican authorities have been helpful, their U.S. counterparts said.
“They're cooperating, but we would like them to do even more,” Drickersen said.
A week ago, Mexican authorities rescued two female real estate agents who were being held in a Tijuana neighborhood. The women were kidnapped Jan. 19 by three men after showing a property in southern Tijuana, the Baja California Attorney General's Office said in a statement.
The men called in a ransom demand of $350,000, the statement said. Family members negotiated a payment of $27,000 and dropped off the cash, but the women weren't released.
Baja California state agents tracked down the vehicle used to pick up the cash. The driver led authorities to the women, and three men were arrested.
Both women are Mexican citizens, although one is married to a U.S. resident. She and her husband live in Chula Vista."

El Porvenir (Monterrey, Nuevo Leon), El Debate (Culiacan, Sinaloa) 1/30/08 - At a landing strip near Navolato, Sinaloa, Mex. armed forces personnel seized fifteen light aircraft, eight SUV's & pickups, an ATV, 3 pistols and small amounts of cocaine. Two subjects managed to flee. 30 rounds of ammunition were also seized. The "PGR" (the Mex. Dep't. of Justice) reported the aircraft are believed to have been used to transport narcotics."El Debate" reported 28 light aircraft and one detainee at La Luna airport, also in the Navolato area, and that one person was arrested.(note: these two reports do not appear to refer to the same event. Navolato, Sinaloa, is a town a few miles outside Culiacan, across the mouth of the Gulf of Baja Calif. from the southern tip of the Peninsula of Baja Calif.)


"Frontera" (Tijuana, Baja Calif.) 1/30/08 - Sergio Aponte Polito is the Mex. army general in charge of the country's 2nd. military district (Sonora & the entire Baja peninsula). He said that military personnel now working at the forefront of city police in Tijuana and Rosarito have received offers of collusion from organized crime sources and warned that he and all personnel under his command will continue operations against criminals without a let-up.He remarked that the large number of auto thefts would not be possible if the thieves didn't act without any fear of the police. The monthly average of vehicles stolen in Tijuana: 1,860. In Mexicali: 484.

"AP" (Tijuana, Baja Calif.) 1-30-2008 - Tijuana airport shooting. Truck crashes into Tijuana airport terminal after driver killed by gunmen. Gunmen chased a pickup truck into Tijuana's international airport on Wednesday, firing at and killing the driver, whose vehicle crashed through the windows of the terminal and came to rest near a security check point. Two women riding with the victim were wounded and the airport's operations were briefly interrupted, the Baja California state attorney general's office reported. The shooting occurred in the early morning when few people were at the terminal. The gunmen fired into the pickup as it lay inside the airport lobby to make sure the driver was dead. They fled in another vehicle. Police said the driver had called an emergency number earlier to say he was being chased, but the call cut off. No arrests have been announced. There was no immediate information on a motive in the attack, but Tijuana has been plagued in recent months by a spate of shootouts and killings of police, apparently involving gangs and drug traffickers. The unidentified bodies of three men – two of whom had their hands bound and showed signs of torture – were found dumped in a vacant lot in Playas de Rosarito, near Tijuana. It was the same spot where the bullet-riddled bodies of a Tijuana police official and another man were found in early January.


"S.D. Union" (Tijuana, Baja Calif.) 2/1/08 – Two real estate agents abducted earlier this month were found Wednesday in a residential area by agents working with the anti-kidnapping unit of the Baja California Attorney General's Office. The victims are both female and active in selling property along the coastal corridor straddling Tijuana and Rosarito Beach, associates said. Both are Mexican citizens, though one is married to a U.S. citizen, said an official of the Baja California Attorney General's Office, who spoke on condition of anonymity because he was not authorized to discuss the case publicly.
Officials would not say if the women live in Mexico or in the United States.
Four suspects were being questioned in connection with the kidnapping, according to the Attorney General's Office. The women were found in a Tijuana development off the highway to Rosarito Beach in a neighborhood known as Fraccionamiento Santa Fe. Salvador Juan Ortz Morales, the chief state prosecutor in Tijuana, said the investigation was ongoing, and his office was not yet prepared to discuss the case.


Frontera (Tijuana, Baja Calif.) 2/2/08 1. Jose Luis Lugo Baez, Deputy Chief of Police in Rosarito, Baja Calif., was arrested yesterday on charges of the attempted murder of the Secretary of Public Security of Rosarito plus also on separate charges of involvement in kidnapping, theft, homicide and protection of narcotics retailing as well as of organized crime operations.Lugo Baez has been identified as just one of thirteen officers who took part in the failed attempt to assassinate the Public Security Secretary.

"Tijuana experiences a "red-blood" January" .Tijuana was the most violent city in Mexico during the first month of this year. According to official figures more than one person per day was murdered in Tijuana; in comparison with last year, violent deaths have increased 87%. There were 247 executions in Mexico during January: Baja Calif. leads with 42; Chihuahua had 38; Sinaloa 31; Guerrero and Michoacan each had 21 and the Mexico City had 17. The source of the info was quoted as the Federal Department of Public Security.

Tijuana's City Attorney reported that he currently has ninety-nine "open" investigations regarding city police officers and personnel of the city's "Public Security Dep't." and that some of these were opened at the request of federal authorities.

SPEED Mex is a Division of Baja Safari Mexico Club

LINK TO BAJA CRIME WAVE 8
Posted by black e media at 4:48 AM Links to this post 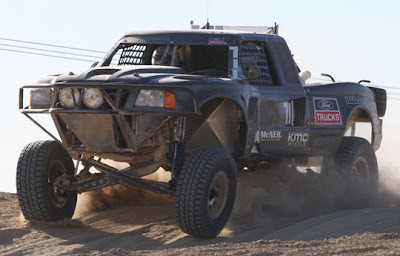 McNeil Racing and Perry's Fab announces the new 2008 Race Ranger!
Click the picture for details on the story at McNeil Racings website. See Mcneil Racing dominate the Superstition Series at http://mdrracing.com/superstition/
Posted by black e media at 10:20 AM Links to this post