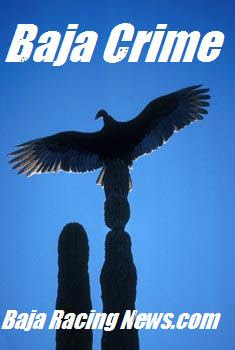 LINK TO BAJA CRIME WAVE PART 7
Posted by black e media at 1:06 AM Links to this post

The CABO 500 is sponsoring Andrea Tomba and ATRacing for the 2008 race season. Andrea ran into hard times recently, when the State Baja Sur taxes he was paying became so great, he no longer could keep his family small business going. Andreas ATRacing cant express their gratitude enough to the CABO 500 sponsor supporting us in 2008.

Andrea Tomba said, "The Governor of Baja Sur is corrupt and the rest of La Paz cannot be trusted". Thanks CABO 500 for bailing us out!

ATRacing would also like to welcome some new sponsors whom have joined us for this season: Laboratorios Armstrong took the step to run the first Super Motor Sports sponsorship Program this year through CABO 500. Also helping are SPARCO Race wear this year, as style and comfort go hand in hand in their products. OGIO Racing is also participating in this years race program, and we are happy to have their support this season.

The whole team currently has their hands full with getting ready for the Baja racing season. Everybody at Banda Race Fabrication are busy making some changes to the new addition to the ATR fleet, the ex-champion Class 6 FORD Bronco, previously raced by our friend Filli Diaz from Loreto. The truck is being fine tuned, and having some suspension changes, so that it will be ready to give our new driver Bert Tjeenk a chance to clench the victory in Class 6. Class 6 will be the team's main goal this season, with Andrea & Bert signing up as joint drivers in the Bronco, and Andrea will most probably pilot the truck in Short Course races whilst Bert will tame it in the Desert races.

The FORD Explorer known as "La Iguana" will be competing in Class 8 in most of the Championship races, so we will see two trucks sporting the ATR and its sponsor's colors this season. Russ, our ProBaja President, has also been working overtime, rebuilding a whole new website to make it more user friendly, and more attractive. It will be ready in a few months. We will be participating in the ProBaja Southern Baja Off Road Championship and State Association again this year.

There are two of the races that will be shared between both State Association and ProBaja, the 2008 Dos Mares CABO 500 and the CABO 500 in the Fall, so the turn out on these races is bound to be huge, so book your stay early!

We have also invested in a FORD Ranger CLASS 7 truck, which will be used for pre-running, but may also compete in some of the National Mexican races depending on their schedule. Our super nice wide open Offroad Cabo $100,000 race buggies are ready for you! Call us to book your tours at 619-251-9486 or eMail caboclub@cox.net

KING OF BAJA to be named ending 2008 season 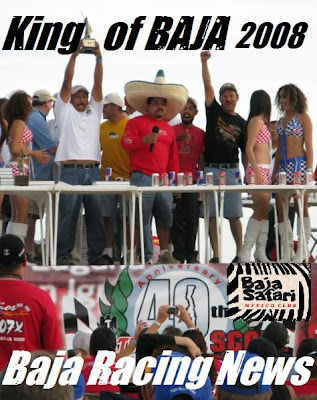 Baja Racing News.com will name and announce the KING OF BAJA Award, at the end of the 2008 Baja Racing Season.

The KING OF BAJA will be announced December 6, 2008, in a BURNING LAS VEGAS!

"This year the choice of "KING OF BAJA Award"will be interesting. With fewer big names running races in Mexico this year, the choice will be a break-out in racing! Gary Newsome, Editor, of Baja Racing News.com said in November.

"WE ARE GOING TO BURN DOWN LAS VEGAS"

Baja Racing News.com
Posted by black e media at 7:05 AM Links to this post 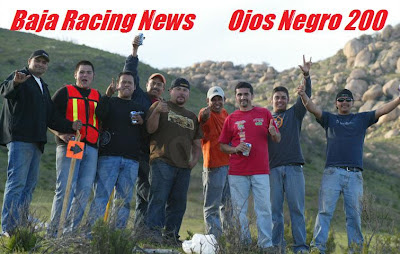 Saturday February 23, Ojos Negro 200 Off-Road
The Ojos Negro 200 was a great race. With race conditions much like that of central California in winter, the cold, muddy and sideways racing was enjoyed by all. Contingency in Ensenada on Friday avoided the rain and the off-road race fanatics of Baja California came out to meet and greet the racers for technical inspections and drivers gatherings, the night before the race.

Sundays racing encountered wet & muddy race conditions, for Baja Mexico. After several weeks of rain the rancho where the race was held, had lots of surface water, unusual for Baja. 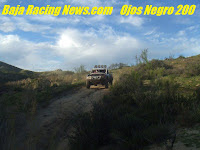 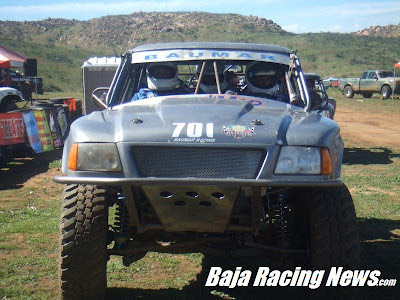 Posted by black e media at 7:00 AM Links to this post