""Dear Desert Racer, SCORE International is honored to be able to work with Yves Morizot and Stand 21 of France to present the very unique SCORE Safety Seminar from 9 a.m. to 1 p.m. on Saturday, May 3.

To be held at the Eibach Springs-North America headquarters in Corona, Calif., this first-of-its-kind seminar is open to ALL desert racers, no matter what series you race, and ALL desert racing promoters. For 38 years, Stand 21 has developed, manufactured and sold safety equipment for racers. Among the prominent clients of Stand 21 have been a variety of series including F1, GT, Prototypes, NASCAR, Rally, Dakar Rally and Touring Car.

Stand 21 is also the official and exclusive world supplier for Porsche Motorsports, and is one of only two HANS licensed manufacturers in the world. Stand 21 has conducted over 30 safety seminars worldwide and we are extremely excited to have them produce one especially targeted to our very special needs in the world of desert racing.

It is also a distinct honor to be able to have noted Professor John Melvin as one of our speakers. We are convinced that this will be a very worthwhile activity for all of us to participate in on May 3 and we look forward to seeing you there. Admission is free, refreshments will be served and a special tour of the Eibach North America facility will be offered. We thank Eibach for their generousity.

Building on a tradition it started in 2003, BFGoodrich® Tires has named off-road racing veteran Rob MacCachren as the BFGoodrich Tires Motorsports Person of the Year. The award annually recognizes the contributions of drivers and officials in each of the racing series that BFGoodrich Tires competes. MacCachren received the award due to his extraordinary contributions to off-road motorsports, numerous business accomplishments and 40th annual SCORE Baja 1000 victory. The award was presented at the Menzies Motorsports open house in Las Vegas following an announcement that MacCachren will be driving for Menzies in 2008. To win the award, the person must have made a significant contribution to racing both on and off the track, demonstrated a commitment to excellence with an uncompromising passion for motorsports, shown a sincere dedication to improve off-road motorsports for all competitors and leave a positive lasting mark.“BFGoodrich Tires has had the opportunity to work with some of the best and most recognized names in racing throughout the years and it is important that we take time to recognize the achievement and sportsmanship of those who make racing what it is today,” said Todd Steen, motorsports marketing manager for BFGoodrich Tires. “I am proud to recognize Rob as our newest recipient of this honor.”
Born with an inherent love for off-roading, MacCachren established his penchant for kicking up the dust at an early age. He began racing dirt bikes over the rigors of the terrain near his hometown of Las Vegas and by the time he was eight years old, won the Nevada State Motorcycle Championship. Having earned more than 100 victories and 15 career championships since the beginning of his off-road racing career, MacCachren has consistently proven to be a formidable force in any off-road venue. After forming his own race team, MacCachren Motorsports, in 1997, MacCachren has shown considerable strength and character in developing a first class operation run solely by family members. A few notable accomplishments for MacCachren include earning Southern Nevada Off-Road Enthusiasts (SNORE) Driver of the Year award four times. He also achieved the Triple Crown in 1987 when he took the SNORE, SCORE International Off-Road Racing and High Desert Racing Association (HDRA) Driver of the Year awards.
“Rob is an amazing competitor, enthusiastic business professional and a great ambassador for our sport,” said Steen. “He’s been instrumental with enhancing the awareness and expansion of the sport and his efforts in racing while managing a successful business with the help of his family is a testament to his character.”
Throughout the 2007 off-road racing season, MacCachren was nearly unstoppable, capturing 12 wins in two separate classes in Championship Off-Road Racing (CORR) competition. MacCachren and his co-driver Mark Post also grabbed four wins in SCORE and Best in the Desert (BITD) races before the duo joined forces with off-road stalwart, Carl Renezeder, to take on the 40th annual SCORE Baja 1000. Facing a near-record field of 424 starting entrants, the trio of BFGoodrich Tires drivers recorded the fastest overall speed in a four-wheel vehicle over the grueling 1,296 mile course down the rugged peninsula of Baja California, Mexico, to capture the 40th annual SCORE Baja 1000 overall title and thusly the SCORE Desert Series point championship.
Each year, five finalists are selected by BFGoodrich with one winner selected from the distinguished group. The inaugural winner of the award in 2003 was Sal Fish, President/CEO of SCORE International, the world’s premier off-road racing series and home to events like the SCORE Baja 1000. The 2004 winner, Rod Hall, is widely considered the most successful driver in off-road history. In 2005, BFGoodrich Tires honored the contributions of Frank DeAngelo and recognized him as the cornerstone of the BFGoodrich motorsports program and the 2006 honor was bestowed upon Marty Fiolka, editor-in-chief director of the off-road group at Advanstar Communications, which publishes DIRTsports magazine.
Using motorsports as a proving ground for more than 30 years, BFGoodrich® Tires is involved in every type of racing, including oval, sports car, drifting, drag, desert, dirt, rally and extreme rock-crawling. BFGoodrich Tires combines technological expertise with vast motorsports experience, delivering a high-performance tire for every type of vehicle. Visit BFGoodrich Tires online at http://www.bfgoodrichtires.com/.
Posted by black e media at 5:00 AM Links to this post 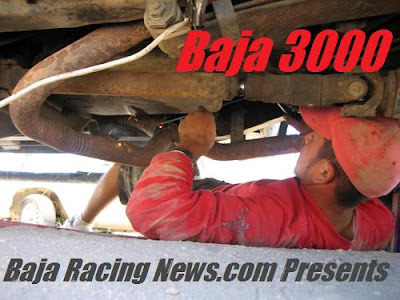 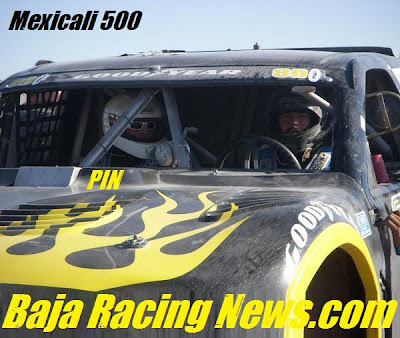 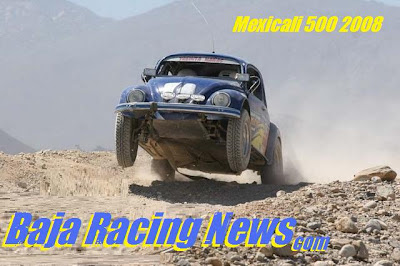 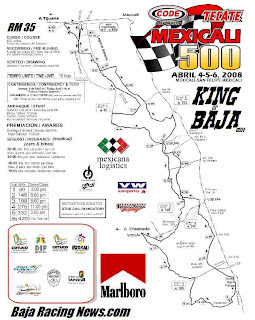 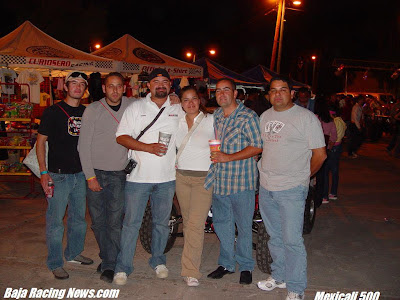 The longest distance race in Baja North in Spring

The Mexicali based racers announces this second race of the 2008 season, this one its set up to be held in the outskirts of Mexicali at one of the most majestic scenarios in Baja, the Laguna Salada dry lake, this weekend some more of 100 cars and trucks and 50 or plus bikes and quads will be lined up to see the green flag and start the 420 miles trek on this adventure on the Mexicali – San Felipe area.

For the third time in the 10 years promoting off road events in Mexico, Mexicali based promoters, CODE off road are hosting festivites in Mexicali all weekend. This is long endurance race for Baja North, the start of the race its programmed on the first light of this Saturday 5 at 5:30 am the first motorcycle its scheduled to leave the start area, after 3 hours the first car of the unlimited class are going to receive the green flag of the race. Noe Casas from Tijuana riding the 2x plate it’s the first motorcycle to receive the green flag and on the same case Javier Robles #101 in his class 1 Curry-Chevrolet it is the first car & truck official starter of the race.

Casas (2X) from Tijuana its one of the race favorites for the event, in other hand Robles from the Mexicali Valley its graduating after some successful seasons in a Class 10 car, now in his second appearance of his class 1 its marked as one of the favorites to overall the race and win the class, among this competitors, classes 16, 10 and class 7 are the ones with more entries in this race, also this it’s the warm up for the different classes title.

The race past along of some traditional race courses in Baja, starts in Mexicali the cross the Salada dry lake to go south via Borrego the go west to San Matias pass again goes east and south to pass Diablo dry lake on his way to San Felipe, after this point they came back to north using the power line road to go and again head to the north to cross the highway at the Chinero area and came to the final sections of the race the long straightway to Mexicali via Saldana and the east side of the Laguna Salada, the last 35 miles are the same ones of the morning.

Festivities starts this Friday 4th with contingency & tech inspection at the Vicente guerrero events park from noon to 7:00 pm, Saturday morning it’s the race and Sunday at 1:00 pm it’s the awards ceremony at the Colonial Hotel.

Posted by black e media at 5:00 PM Links to this post