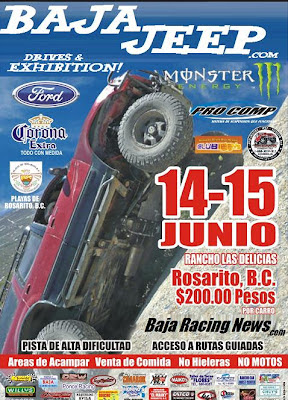 Posted by black e media at 6:56 AM Links to this post 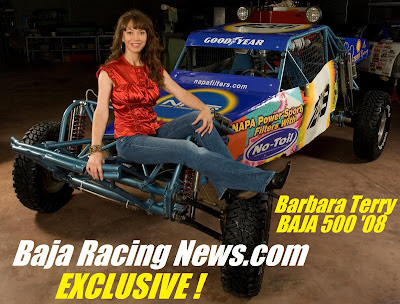 Barbara Terry will be competing in the SCORE Lite Class in the Baja 500 in Ensenada, Baja California, Mexico. Emory Helms, Terry's team manager is all set to go to Mexico. Last year Terry challenged the Baja 100 in another class. "The Queen of the Saturday Night Dirt Tracks of East Texas", Barbara Terry is also one of the most sought-after auto experts in television, print and radio. She leads the auto expert industry with her mainstay: easy-to-follow auto advice that allows everyone to become their own auto mechanic. Barbara's racing in the 2008 Baja 500, is an important advancement in the sport.

Barbara loves to be challenged. With sponsors like NAPA Filters, Goodyear Tires, Shell Fuels and GPS Protected and big-Time media support, it's guaranteed Off-Road is enhanced with Barbara's play in Baja. Based in Charlotte, North Carolina, the Terry Racing operation is right in the middle of North America's racing community.

She has appeared on the cover of Kiplinger's Magazine and has made more than 250 national and regional television and radio appearances since 2006 such as The CBS Early Show, Inside Edition, The Tony Danza Show, CNN, maxim radio and ivillage, among a very long list of others.
Barbara serves and has also served as the spokesperson for such companies as eBay Motors, Goodyear Tires, Gillette, Shell Oil, RainX and Turtle Wax.

She currently writes a weekly auto advice column for The Houston Chronicle, is an automotive content contributor for motorolaroadtrips.com, wrote a series of automotive articles for Men’s Fitness Magazine and is signed with Vigliano Associates Publishing Agency to pen her first book.
Barbara has gone international. On November 11th 2007 she was Host/Emcee for GM Style Dubai Event in Dubai UAE and then raced in the Baja 1000 in 2007. She will race as head driver for her own race team in the Baja 500 and Baja 1000, this year. Barbara is presently in negotiations for her own reality show, 'BT Garage'.

Let's talk more about Barbara. In the challenging world of automotive technologies and translating and communicating to the general public, Barbara presents a refreshing new approach. She represents a big public, who are successful in their fields and are out to use their vast knowledge from years of experience in virtually all aspects of the auto industry to educate, inform and entertain the national consumer.

It's to no surprise Barbara turned out mastering her expertise in the automotive field. She grew up on her family's Texas ranch with 6 older brothers, so Barbara's love of the automobile has been her constant passion for as long as she can remember. When not at work, she loves the speed and thrill of racing anything she can get her hands on, from participating in demolition derbies, racing dragsters to racing on dirt tracks using modified street cars and hot rods.

Barbara splits her time between the East and West coasts. Always a sport, she says, "You can dress me up or dress me down and I feel comfortable both ways." Barbara's favorite hobbies and pastimes are fishing and a variety of other outdoor activities, hanging out with her yellow lab…Rocky, watching and cheering on her favorite hometown football team…The Dallas Cowboys, running 3 miles a day and cooking with her mad skills that she obtained by cooking for her 6 older brothers growing up in Texas.

On screen and off, Barbara has an enticing charisma, charming wit and the ability to welcome every personality. Her energy is boundless, which is matched only by her ambition and strong desire to succeed in empowering women and men about their automobiles. In Barbara's words, "Being able to inform consumers with enough knowledge pertaining to their cars gives me great pleasure and a feeling of accomplishment. Our cars are typically the 2nd largest thing that we invest in and we want to protect that investment.”

"Owning my own race team has always been a dream of mine since I was knee high to a grasshopper." Barbara says, "I'm excited that you have stopped by my racing page to check out my sponsors, my buggie and all of the going-ons with Barbara Terry Racing.
My first official race will be this years Baja 500 2008 in Ensenada Mexico on May 30th." NAPA Filters has hopped on board as her Title Sponsor for this years Baja 500 and she is more than thrilled to say her website, BarbaraTerry.com has is finally done.

2008 marks the 40th anniversary of the Baja 500. Baja Racing News.com will be the only Exclusively LIVE! Webcast of the event. ESPN, NBC and The Outdoor Channel will cover the event. Racecasts run on a regular basis on Televisa, Telemundo and TV Azteca that are shown throughout Baja California, the mainland of Mexico and South America.More than 200,000 spectators will attend the event. Barbara Terry will be in Ensenada a week before the race to do a pre-run of the course and take part in media interviews in order to mention her sponsors.

NAPA Filters has teamed up with No Toil filters. The story of No-Toil is a stereotypical “started in a garage” saga. Bob Jensen, No-Toil founder, has been riding motorcycles since the 60’s. Over the years, he realized that cleaning dirty foam air filters is a real pain in the neck. So, right here in this very garage, he set out to develop an easier, safer and better way to oil and clean foam air filters. He wanted to be able to clean his filters in his sink, but since his house uses a septic system, he was not able to use gas or harsh solvents. After months of research and testing, Bob revolutionized the industry with his creation of the world’s first biodegradable & non-toxic air filter oil. This means that riders no longer have to clean their dirty filters in gas or harsh solvents. The No-Toil filter maintenance system uses water and a high concentrated powder cleaner to remove the dirt and oil in seconds. Disposal of the dirty water is as easy as pouring it down the drain or throwing in on the ground. Bob’s wife, Marie, has no idea that we’ve been pouring it on her roses for years! No-Toil does not compromise performance for the ease of cleaning. You get all the benefits of the highest quality air filtration system in the world. 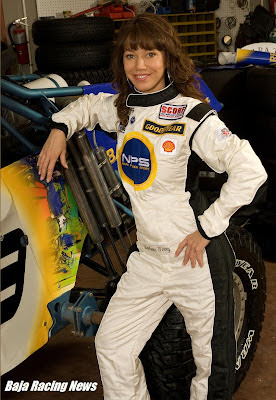 Posted by black e media at 9:01 AM Links to this post