The City, State and Federal Governments have questions for Klaus Rasch and Curtis Guise

June 17, 2012
FAST-Aid uses Scammers Race Dezert to take in thousands of dollars in "charity money", when they haven't even filed with the IRS with their required financials into 2012! Three years and Thousands of $$$!

June 20, 2008
You can run, but, you can't hide! From The Internet Archive: "We're sorry, access to "klaus&curtis site" has been blocked by the site owner." ;) Can you say, previously downloaded?
May 27, 2008
The sham continues. Out promoting their new "video", they claim to play the new video for sale by charging for tickets, all the while, whats played to the audience is not the video for sale. In particular the "Metallica music section" is not on the video for sale. "it's only on the one played for the audience, to induce them to buy the video". Can you say false advertising?
When asking one of their monkeys 'why the scam?', jh said, "they just don't want to pay Metallica" (for their due royalties for a public usage by klaus&curtis).
February 15, 2008
Confirmed Fraud:
Proven by Government officials and no denial since our original story exposing Klaus Rasch and Curtis Guise. Klaus Rasch and Curtis Guise violated California State Law for years by soliciting the "desert racing community" as a "non-profit", when in fact, their website and associated sales of merchandise was not a bonafide non-profit.
And what is the official response from Klaus Rasch and Curtis guise legal representative, Travis Clarke? Here it is, in it's entirety, "You really have way too much time on your hands.". Their complete response, no denial.
Not only did they violate State law, they violated City of Huntington Beach law for years by not having a business license and not listing their mail address as a 'postal mail box', in violation of Federal law. All in an obvious attempt to avoid detection. The local postal service said, "they are trying to hide!".
LINK FOR COMPLAINT FOR REFUNDS

If you contributed to the "desert racing community" by giving any money to this scam, by buying their DVD's or advertising on the website or buying a t-shirt or any other means and you want your money back, no matter when you contributed, click here: http://ag.ca.gov/charities/forms/charitable/ct9.pdf for the form to solicit the State of California Attorney Generals Office for a refund. Contact bajaracingnews@live.com for any assistance in this process.

The City Of Huntington Beach confirmed to Baja Racing News.com that Klaus Rasch scurried into the City to get his permit, that he should have had for years, just after notice of our story. On Oct 4.
Sales from the site proven without a city permit for five years and violating State Law for seven years.

The Government Post Office in Huntington Beach California, where your postal records are filed, the representative named 'Guy', wants to know why you are violating Federal law by placing on your website an address that says 'unit', which you have done for many years, which is false and you must use the term, 'PMB', Postal Mail Box. "That means they are trying to hide", we were told by the Postal Service representative. From the website today,

The City of Huntington Beach, the representative named 'Patricia', wants to know why you, Klaus Rash, are violating City law by conducting business in their city and placing on your website an address that lists Huntington Beach and you have not paid your business license fees since 2002.
UPDATE:

Klaus came into the City of Huntington Beach offices on October 4 and paid their business license fees current to 10-31-08. He is listed by the required permit as a computer consultant. Because Klaus Rasch and Curtis guise had not been current since 2002, he was forced to pay three years of back fees to become current with the City. So, from 2002 until 2007, five years, Klaus Rasch and Curtis Guise and their website and related sales, operated in Huntington Beach without a required by law, business permit. A represenative with the City stated today, "He came in even before he received the City letter mandating his permit violation".

The State of California Attorney General Charitable Trust Division, wants to know why you, Klaus Rasch and Curtis Guise, are violating State law with your website stating that it is "a non-profit" site for SEVEN YEARS, from 2000 to 2007. There is no state record of a State required registration of a non-profit company in your name or your websites name. From the archive, "Welcome to ****-******.com. This is a non-profit web-page dedicated to serving the desert racing community".

Baja Racing News.com has learned in some cases, companies that have claimed to be charities for over seven years, can be forced to disgorge all their revenues from those years.
Posted by black e media at 6:45 AM Links to this post

The true colors of Ensenada and Baja Californianos comes out in the newspaper "The Watch" today.

"Sal Fish, SCORE and its sponsors take everything. Not only the inscriptions and sponsorships, but also all the merchandising of souvenirs and licensing. Not a cent enters Mexico.

Our city, Ensenada, does not have to be kidnapped twice a year for supposed “economic reasons”. It is incredible that celebrating the '40 years of its beginning', has not been realised. Any study that evaluates the real impact that has these races on Ensenada and its surroundings. Many of which they are in favor of these races say that they are a “tradition”. This is false. One is a American tradition that was brought for here.

(Baja Off-Road Racing)The one that is an “American tradition” on our ground, is a problem and it causes a certain cultural impact that directly is against our deeper roots and values. That is to say, this kind event is against our true Baja Californiano traditions. For example, the same name of a “Baja” race, has been causing our landsto become “his Baja” (Baja-lands, that Americans take), when its true name is "Baja California". In any case the race would have to be called “Baja California” or “California”, since this name is original of our earth and traditions. Nor what is said about all of the other social impacts, like the consumption, the promotion of the vulgarity, the alcoholism and the masculinity associated to these races." (From BRN: God Bless America!)"


Here is the Official response from SCORE International:

"This is the answer to that writing on the part of the lawyer Oscar Ramos Jassen , legal representative of Score International, same that will be published in Newspaper the Watch.

“Baja Californianos” as you want to call them; it is better than to only talk about the injurious news and an image of the violence state, executions, drug trafficking and insecurity to the visitor. The Municipal, State and Federal authorities are not “puppets” of anybody; and they are totally conscious of the direct benefits and the promotion that these events generate."


The Watch is right about one thing, Off-Road racing is American!

The Baja Racing News.com response to the discussion. Americans gave Baja to the Mexicans to take care of it for our use. The U.S. American flag flew over La Paz from April of 1847 to July of 1848. Americans won the Mexican-American war. History is written by the winners. Choke on it Baja, Americans are in Mexico to race and we will keep taking what we will, including what Baja wants to keep for themselves. Americans will take what they want and bring our traditions to the front yard of Mexico.

Baja Racing News.com
Posted by black e media at 6:44 AM Links to this post 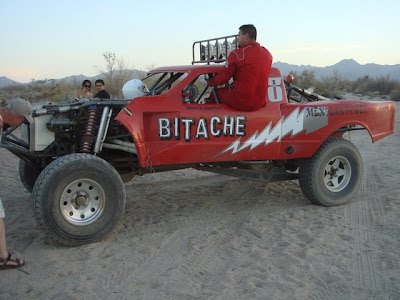 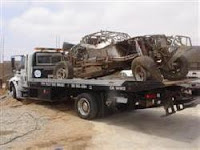 On Saturday in Camalú, Baja California, Mexico, 2 guys were killed after the Trophy Truck they occupied crashed. The driver, Juan Sánchez Rodríguez 46 años de edad, years of age and his occupant Misael Martínez Perea, de 44 años, 44 years of age, perished. The accident happened when a group was celebrating fathers day, reports are they were drunk and the truck overturned. Both were ejected from the truck, no seat belts were used, one was pronounced dead at the scene the other guy died at the hospital.

Here's video from the Zara' race earlier this season.

Baja Racing News extends prayers.
Posted by black e media at 7:00 AM Links to this post 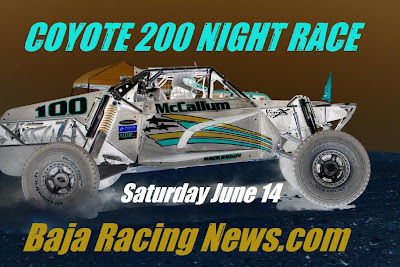 Posted by black e media at 3:22 PM Links to this post

The Banshee was built in 1972 by Vic Hickey in Ventura California. He also built two Oldsmobile Cutlass', the Baja Boot, Chevy pick-ups and Blazers for off-road racing. The Banshee is a one of a kind; all tubular frame fiberglass body, mid-engine 350 cu. in. Oldsmobile off-road racing car. It was built to race in the Baja races and the Mint 400 in Las Vegas. James Garner, the famous movie actor and TV star was one of the designated drivers. Other drivers included Bud Ekins, Cliff Coleman, Wally Dallenbach and others. This car was in race prepared shape when it was retired in November 1975. This car has been displayed inside a private museum for the last 32 years. This car is a great piece of off-road and racing history and should be displayed in a museum or private collection. The Banshee was featured as the cover car for an article in the December 2007 issue of Hot Rod Magazine. The article is about the 40th anniversary of the Baja 1000. This car is in Buellton, California. Listed at $75 k. 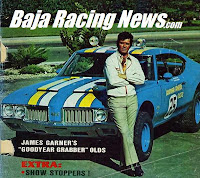 Baja Racing News.com
Posted by black e media at 11:34 AM Links to this post

Posted by black e media at 8:08 AM Links to this post