Class 7SX You Suck! Non-racer girl first in points. Heidi Steele beating the little girls of off road in points, so far The cheating, dress wearing team and green girl driver of record beating everyone in Class 7SX! How bad is this class of racers when they are all getting beat by the cheating promoting,"desert assasins". And the driver of record is just now learning how to drive!?

Pictured is team leader Cameron Steele with special equipment the desert assassins are winning the class with. And husband of driver of record, Heidi.

Baja Racing News.com is still following the story of Heidi Steeles race "visible" tracking stopping prior to the finish at the most recent Baja 500. AN EQUIPMENT PROBLEM? Reports at the time indicated questions about the finish of the Class 7SX leaders. Do you have information on this story? Send it to: bajaracingnews@live.com 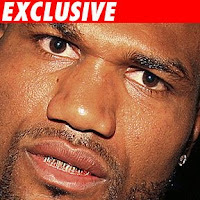 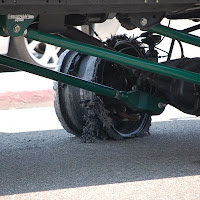 TOYO Tires Rampage Jackson caught - Again!
Quinton "Rampage" Jackson has been picked up by police again.
The new formula in getting tire sponsorships. Go nuts.
Sources say around 4:30 PM yesterday, friends who were hanging out with Rampage, waved down an Irvine police car after they were worried about his behavior. This, of course, following the insane chase the day before in which the UFC fighter hit several cars in his monster truck and was arrested at gunpoint. We're told Irvine cops saw Rampage, deemed him a danger to himself and others, and took him to a hospital for observation. Rampage was very coopertive with police. Cops won't officially confirm if it's a psychiatric hold.
TOYO Tires pieces for sale!
That's right ladies and gentlemen, for the small price of $20 you can own your very own piece of the wildest, craziest, most splendiferous celebrity car chase since O.J. Simpson rumbled his white Bronco down the 405!One unlucky bystander, who "almost got hit by this big a** truck being chased" was crafty enough to pick up the pieces of Quinton "Rampage" Jackson's reputation -- in the form of one shredded monster truck tire. Of course, the entrepreneur put up an ad for the tire on Craigslist, which the dudes from Deadspin.com happened to catch while trolling for used car parts.
Earlier reports:
Watch out (So-Cal) pedestrians -- Quinton "Rampage" Jackson was just released into the wild. After being refused from an Orange County jail for being "medically unfit" -- Rampage was treated an O.C. hospital and released on $25,000 bail.
Turns out, if local news had run the Rampage Jackson car chase live, it could have gotten Super Bowl ratings because it was one of the craziest chases on record, causing pedestrians to "flee for their lives." Just what a tire company wants in southern California, right?
As TMZ first reported, the just-defeated UFC champ was busted yesterday afternoon for alleged felony hit and run. Now we have the details -- and they're insane! Rampage was on the 55 Freeway in the O.C., hit two cars and got off the freeway. The chase was on. Rampage then began driving on the center divider. But it gets worse. According to the police report, Jackson then drove on the sidewalk, "causing pedestrians to flee for their lives." He started driving the wrong way on a crowded street, colliding with yet another car in an intersection. As he continued on, running several red lights, his tire disintegrated and he began driving on the rim.Rampage eventually got to the exclusive Balboa Peninsula in Newport Beach, where he again drove on the sidewalk, "causing pedestrians to flee in terror."Eventually, his car came to a stop and he was taken into custody at gunpoint. Cops took him to the Orange County Jail, but they determined he was "medically unfit" to be booked. Cops won't say if he was high.
Does TOYO Tires want to sponsor this guy?
TAKEDOWN ON TAPE PHOTO LINK HERE
Courtesy TMZ.com
Posted by black e media at 9:00 AM Links to this post

Dude, Jesse James took me for a ride! TMZ.com

CLICK HERE FOR THE WHOLE STORY ON JESSE JAMES
Posted by black e media at 5:38 PM Links to this post

Glamis Gurlie will suck you off. Jamie Fagan blows. 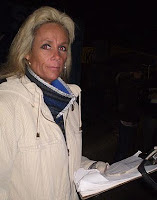 Manolo with ProBaja said after Jamie Fagan tried "to get ahold" of him, "Glamis Gurlie will suck you off", in classic broken Spanish and English! Now that Manolos ProBaja website collapsed again and the two race associations are fighting over racers in southern Baja, again. It's mid-July and Jamie Fagan has been caught with her mouth around the wanker of another racing organization. Again. This happens every July, right?

All racing organizations contacted for this story, refute the following Jamie Fagan, of Las Vegas, Nevada, comments are connected to any legit racing group. They simply say, 'she's a volunteer, period'.

Jamie Fagan said in trying to uslurp a legit racing organization:
"I know this because I personally looked into it with the BLM regarding the Plaster City area and I was given the okey doke if I chose to, as long as it didnt conflict with the bike races..."

Trey Piersall kept sucking:
"Yes that is true to a point. The key word is "good standing". From what I have been told is a (new)promoter can challange those guarantees. I've said too much...."

Jamie Fagan continued the sucking:
"Yessir, that is the key word there, as well as reputation, cooperation, and management of the area used when racing..."

Brian Burgess "Cheater": "Part of the problem is MDR cheerleaders that are on here saying that its a truck series and they don't need buggys. If I was MDR I would take those guys pom poms away and zip their mouths closed. Also this goes for MDR and MORE they both need to get a tracking system. The More series has more cheating but that is only because they have 3 times the cars and if MDR ever gets the car count up it will have the same problem. If MORE and MDR are commited they will get a tracking system. If they are not they will still only be a testing ground for a lot of teams."

On the pro 1600 website:
"12/10/07
Terrible’s PRO1600 Shoot-Out Contingency:
PAB stepped up as usual: "Every extended member of the DA family in attendance at Primm New Years will put up $50 of their own cash for the most flagrant cheater of the weekend......"

Jamie Fagan said: "I think someone should just buy MDR - new ownership and good reputations are what it's gonna take to get this series back to its glory... And i'm not putting down any of you that are working hard to get it to turn around, so please don't take it that way - i would love to see a competitive, professional and honest for-the-racers series going on down there... I just see the writing on the wall as long as the current owners are involved...leopards can't change their spots..."
And as long as Jamie Fagan is a volunteer off-road contingency rep, she can slander any legit racing organization she wants, right? Welcome to the fake west coast off-road racing community!!!
Leave it to Brain "cheater" Burgess to say who is cheating and who is not! Just like in farting, 'the one who smelt it dealt it'.
Along with some other off-road racing 'volunteers', Jamie Fagan says they should be "bought out", because, according to this, "they" are not honest.

As for the others who echo Jamie Fagans verbal farts, the legit racing organizations know you, know you are just whining, bitching, little girls who have nothing to do with real sport. Keep up the squeels bitches, we all know who you are, you are dragging down the entire off-road racing community, losing land to race on and any vestige of legitimacy.

Jamie blew pab = cameron steele and the da hard last year, check this out. CLICK HERE
Jamie: "My Hobbies & Interests... Hmmmm Interests: checking out all the hot guys in Tech - whew! God, I love my job :) ... oh, and did I mention checking out all the hot guys in Tech? heh heh...drinking, drinking and drinking, music, anything except country acccck!!" Who is taking care of your kids, Jamie?
Gary Newsome Editor
Baja Racing News.com
Posted by black e media at 8:34 AM Links to this post

Posted by black e media at 5:46 PM Links to this post