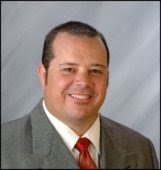 Pic of the accused Holthus.
Accusations flew this week, against Jim Holthus and Shaun Ochsner of copyright infringement, copying and using pictures and other media for their purposes without the approval of the rightful owners.

Baja Racing News.com is not and never has been connected in any way to the questionable activities of Jim Holthus or Shaun Ochsner and the accusations of lifting media from established media outlets, including but not limited to, Getty Images.

For sometime, Holthus and Ochsner were using their operation to point fingers at photographers and videographers of the off-road nation, accusing many of copyright infringement. With the recent high profile accusations against Jim Holthus and Shaun Ochsner, came at a time when they have been outed for various dubious business activities. Baja Racing News.com has been a victim of the scoundrels lifting content.

Including the $1,000 ($G) reported by an anonymous poster on Baja Racing News.com, that was taken from CORR by Jim Holthus for doing pre-described work that never happened. When that report came out, there was no refutation given to Baja Racing News.com about the story, either from Holthus, Ochsner or TORR.

Now, with TORR being accused of stealing media and the various other accusations, Holthus and Ochsner have been officially outed. Bob Yen, made the accusations public and via email to CORR.
CLICK HERE FOR THE ANONYMOUS POSTS ABOUT HOLTHUS

DRIVE Racing, a group that wants to put up races for the 2009 race season wants the FBI to investigate the infamous disappearance of documents and maps from the El Centro BLM office, by a suspected former BLM employee.

During the years FUD put on races, an employee of the Bureau of Land Management who handled all of the mandatory paperwork for the agency, was a known desert race hater. This is the same person, racing interests think made all those documents and maps disappear from the El Centro BLM office. Now that more races could be held there, the documents and maps are mandatory for race use.

Without the paperwork and maps no new races. So says the El Centro BLM office, they are requiring thousands of dollars of NEW documents and maps just to race for DRIVE.

Anyone who knows about forcing the BLM into more races and demanding an investigation into the missing documents and maps, knows they need money for legal services. Who knows, probably not theft, the BLM El Centro employee simply walked out of the office with them. No breaking and entering needed to ruin racing, in California to hold more desert races!

Posted by black e media at 11:59 PM Links to this post 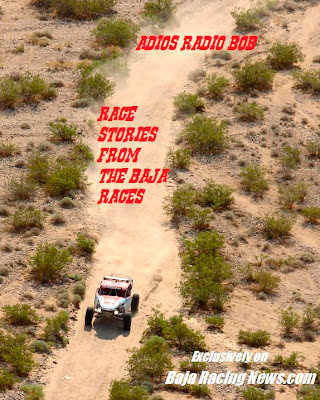 MESSAGE FROM THE PUBLISHER

For well over ten years, the Publisher of Baja Racing News.com worked with and served Radio Bob Hynes of RLH Communications. From his bayside shop in National City California and at many Baja races from San Felipe to Cabo San Lucas.

RLH Communications still serves some of the best off-road racing teams on the west coast, including the storied Baja Champions, McMillin Racing.

At a luncheon hosted by our publisher, during the Baja 2000, seaside, at the El Chileno Restaurant at the late, famous Hotel Cabo San Lucas, Radio Bob made a deal.

Radio Bob agreed to quietly share the goings on with BFGoodrich Tires Radio Relay and the west coast racing scene with the public. Over the next seven years plus, old tales, new events and radio relay locations & other saged old secrets were sparingly handed out.

During that same time, our publisher and parent company worked side-by-side with the Official Insurance company and partial rescue assistance of SCORE International regarding its Baja Mexico races. 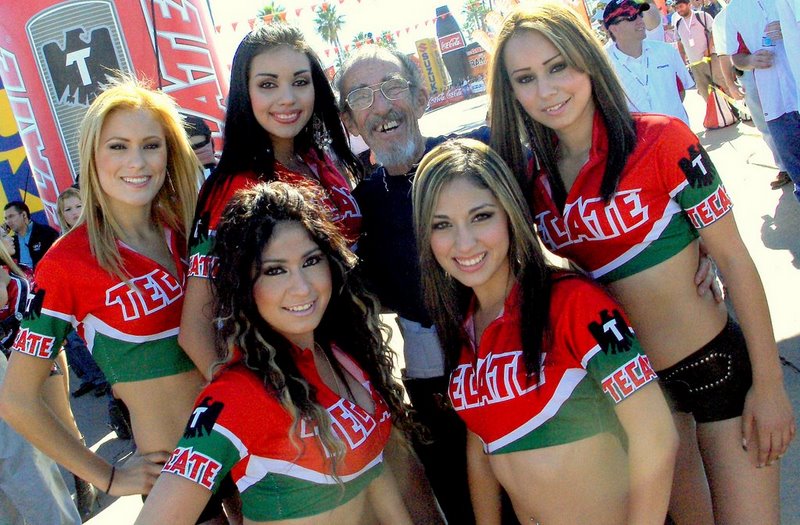 Picture of Radio Bob at the 2006 Baja 1000 Start Line, prior to the Tire Inspection work, for that race.

Also during that time, our publisher served Radio Bob. From being his 'helper' at many Baja races to co-helping Radio Bob and BFGoodrich Tires at the 2006 Baja 1000 at the start line in Ensenada, inspecting and recording the tires of each team prior to the green flag. At a recent ORW El Cajon event, Radio Bob was helping Dan Street and West Racing for the Jacume race, Radio Bob had trouble walking and Mike served Bob the gracious BBQ lunch ponied up for everyone who showed.

Baja Racing News.com is proud to announce, we will be publishing those great Baja race stories. Radio Bob got the checkered flag and passed into Off-Road Racing History this month. We welcome the thoughts and prayers for Radio Bob and look forward to telling you all about his buddy Glen and all the characters that surrounded Radio Bob during his long career. Including the tales of Radio Bob, while in high school, drag racing on Paradise Mesa, in San Diego. The area and basis for the film, "American Graffiti".

Gary Newsome for the Publisher
Baja Racing News.com
Posted by black e media at 11:59 PM Links to this post

Bob Yen just got back from a whirlwind scientific media tour of China and Baja Racing News.com had a chance to get that long awaited interview with the self appointed know-it-all.

Though, when we talked with him, he may not have known it was us doing the interview.
Editor, Gary Newsome.
Baja Racing News.com: Lets talk about the Baja crime wave, what are your thoughts about the Baja tourism crash and burn going on in Mexico now?
"I had a bad experience in Mexico during the races. My truck was parked 1 block from San Nicholas, & was a target of theft on Fri evening after Contingency. There are cop cars circling by every few minutes. I was inside, & some guy walks by..tries to open the door. Disappears around the corner. Comes by again..my small window gets shattered by one of those steel balls!! I get out of my truck to see the guy get into a small red compact, brand new. He gets into reverse, & scrams."
Baja Racing News.com: How does a thief think he can get away with this, with all the cop cars buzzing by?

"Because, the cops are involved & probably are working as "spotters". My truck was vandalized at the last Baja 1000, so this makes TWO! The accounts by others do NOT seem to be random data points. There is definitely a security issue to all Baja race attendees. SCORE needs to address this, otherwise they have a huge mess."
Baja Racing News.com: What kind of mess?
"Mexico is hating life because of all the crime and SCORE is ignoring what really is happening there. The racers I do business with, like Herbst, McMillins, Post, Baldwins, Bob Bowers all have given failing grades to Sr. Pesca for his handling of this collapse. It's an all out SCORE collapse. Sal Fish is just hunkering down this year, trying to let the crime storm blow over.
When Sal Fish of SCORE International said of the racers in SCORE, 'the Super Star Ego-Maniacs' of desert racing will be back. He's probably right, but, if things don't settle down soon, 2009 will be toast in Mexico for any racing."

Baja Racing News.com: What does off-road need to do?
"This is what Offroad Racing needs, some presence on TV/Film. I'm working on some TV/Film projects, since I know some higher ups at Disney, Disney owns ABC, which owns ESPN, which does all the Internet solutions for ABC. I was in touch with an Emmy award winning producer of "The Amazing Race"..that wild endurance race that did stuff 'round the world, like Australia.

He's into offroad, he drives a pimped out disco truck, & drove it to the Emmys. He goes back to Steve McQueen days, & we were talking about Technology & how it could help Offroad Racing get on the map."

Baja Racing News.com: What's your solution?
"I think something crazy wild is going to happen in the not so distant future, something along the lines of a Dust to Glory..but even better. Hint: D2G never made it to mainstream movie theathres, but Technology gives us iTunes video-podcasting. Steve Jobs is on the BoD/Board of Directors of Disney, since PIXAR, which Jobs owns, merged with Disney Animation 2.5 yrs ago. There are some Offroad Racing entities who have iTunes video-podcast I did for them who are requesting some big-time exposure on iTunes. Because of my high-level contacts w/Disney Animation, President, VP, former chief-Scientist, etc. I can possibly go "top-down" to get a deal going. TV, Film, Animation, Internet Solutions via ESPN, etc. Earlier this year, I got a call from the head of Prime Time Programming for ABC, out in NY, we were talking about Internet solutions for the Rose Bowl."
Baja Racing News.com: Really? What else Bob?
"I didn't bring up the subject of Auto Racing, Champcar..which went bankrupt, let alone Offroad Racing, because frankly it's a downer situation."
Baja Racing News.com: Then why are you involved in off-road?
"The money. Racing is a niche-market, doesn't pull the huge numbers like college football."
Baja Racing News.com: What do you think about Championship Off-road Racing?
"Someone told me recently he has 50 million into it..and they are still in the red! Can Jim Baldwin pull off his dream, of a NASCAR equivalent for Offroad Racing? Unfortunately, I and the racers I associate with, see some real challenges/problems in that organization. If they don't fix them, they're done."
Baja Racing News.com: What's your solution?
"Content/Distribution models. Disney/ABC gives us the big-time Distribution connection. Content is Offroad Racing, we would need "cool stories". Facts tell, STORIES SELL.. Business of Entertainment, selling auto racing or pots & pans.
There are some FANTASTIC racers/personalities/stories that are in development, & they need to be surrounded by a team of professionals (video shooters, story writers, producers, directors to bring it to the Public. I've put in a flurry of calls with various luminaries & movers/shakers in Offroad Racing, & excitement is building."

Baja Racing News.com: Wow. Impressive.
"Offroad Racing has its problems and challenges. I just wonder if there's enough Leadership at SCORE, CORR, BITD to conquer the "negatives" so I can bring on these Disney/ABC professionals. They certainly don't want to experience the riff/raff, like I've experienced, with Klaus and Curtis, equivalent to walking thru a mine-field. Bob Bower & I had a lengthy conversation yesterday, about this very issue. The message boards are out of control, damaging the sport and the business."
Baja Racing News.com: So what did you and Bob come up with?
"SCORE needs a new owner and CORR needs to stop wasting money."
Baja Racing News.com: Tell us about your China trip.
"Well I'd like to spam my website about the trip at http://08solareclipse.blogspot.com/

Americans have alot to learn from the Chinese. We (the Chinese) have centuries of technology ahead of Americans. And Americans have been passed up along time ago. I laugh at the photo-video people of off-road, my technologies are far superior to them. I have big plans for the Baja 1000, it'll blow everything off the map."

Baja Racing News.com: You can catch Bob Yen at all the racing events, just look for a Chinese guy, kook, with a funky van topped with a sat-dish. We won't ask him about his vans suspension issues in this interview!
Thanks for sharing it with Baja Racing News as always.
Baja Racing News.com EXCLUSIVE
Posted by black e media at 6:28 AM Links to this post

Posted by black e media at 12:55 PM Links to this post