The Baja Tapes Rambling Stories from Baja Racing and "Jake". Tape No. 5 As told to Gary Newsome

No. 5 The Baja Tapes
We're starting with No. 5 because of the timely and topical nature of the subjects. The Baja tapes are categorized Baja stories told by one person, into cassette audio tapes and written into storyline. 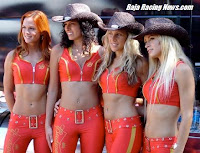 "Jake", not his real name and used for his protection, isn't originally from Southern California. That may be one of the reasons he rubs some locals the wrong way. Locals in southern California live by a 'if you can get away with it' mentality. Jake, who was brought up in a strict military family. In elementary schools, having to wear a suit and tie from first grade and taught by strict nuns, took awhile to get used to.
During those awkward pre-high school years, Jake spent weeks with his dad and uncle with the Balboa Racing Team at Laguna Seca and south of the border in Mexico. In the early years of Nissan rally racing. His dad had a long career driving rally cars on the east coast, before bringing his military family to so-cal. Between the racing and boy scouts, Jake was always a 'C' student, except for Geography and mechanical engineering.
Before the years of working with Corky Mcmillin and Mel Portwood, building the south county of San Diego and the years in Imperial Beach, living on the beach, planning unauthorized midnight trips across the border. Jake was in Baja Mexico getting dragged around the pits of Roger Mears and the 'Mears Gang', Balboa Racing and the early Baja races.

On several forays into Old Mexico like the club searches, Jake and his 'pumphouse hang' ventured into snipe hunts for the mythical 'zebra show', 'donkey show' and the 'three holed woman'. The stories of the Tijuana show girl with two vaginas were too good to be ignored. Some successful, some not. Unlike John, the selfish video guy who was shooting behind the scenes tv at the strip clubs in Tijuana in the late 90's, who ditched the talent when things were going bad, Jake never left a gang member behind. Ever. More on that in No. 8.
The race trips ended up like the scout trips. One of the gang would end up throwing .38 shells in a fire and everyone would run for cover! Typical. Several members of the gang would end up in jail in later years, others just got old and ugly. Just like the results from the early adventures of the races and scout events in Mexico.

On one scout trip, the gang built a raft big enough for four guys, intended to be put out into the Baja surf and anchored so that you wouldn't have to go ashore after every big set. Jake and the gang drive down to clam beach south of Playa La Mision, with the other scouts and proceed to haul the raft out. Not to mention its past midnight and the surf is 6-7 feet. In the dark inky ocean, mid-August. They got slammed after making it out to the last set of swells an 8-10 foot set rolled in and left them to the next day, to rebuild and re-launch. It worked, but the anchor never made it back to the states.

During one of the early Baja pit jobs, Jake tasted Mezcal for the first time. Some of the local Mezcal, made by the mythical magical dwarfs that are believed by locals to reside above the volcanic bluffs overlooking Salsipuedes on the Pacific coast, north of Ensenada. On that trip, in a low hutch of a house, handbuilt by the owner and resembling 'Yodas' house of Star Wars lore, Jake was stuck there with a flat and no spare. In fetching help, he stumbled on one of the vaunted, twisted Baja Mezcal dens. 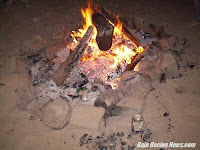 Located right on the cliff edge, the house billowed smoke from the hearth and the pipe. Not being a so-cal druggie, Jake knew the rules and participated in the Mezcal initiations. He was lucky to make it back into the right canyon and the race pits for that 500, where he was late for a re-supply. A beer run. The experience would serve Jake well, when during the first business meeting with a southern Baja off-road race organizer, he was called a 'Mexican brother' after drinking , drink-for-drink into the next morning, in Cabo. 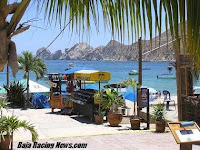 All the canyons, all the crossings from Tijuana to Cabo, Jakes been lucky. For all the time spent on foot, over cow trails on four wheels and the towns and people of Baja Mexico. The awkward early years had the most risk. Even without the crime breakout. It's those years you have no clue what you're really getting into. And sometimes, how to get out. MORE LOADING>>>
Posted by black e media at 7:30 AM Links to this post

CLICK HERE FOR SOME SIRIUS NASCAR PUBLICITY STRATEGY!
Posted by black e media at 9:00 AM Links to this post

UPDATE! Let's take another look at this sweet set-up.

Team Baja Racing News.com! Do a cool wrap and we are in the racing business...Hey, we can dream! (Happy face placed here)

Long Beach Racers wants to move up a class, so we're selling our ultimate race trailer, Freightliner Extended cab tow rig, and our Baja Championship winning race truck as a package deal, along with all of our spare parts, wheels and tires, etc. We will consider separating as well. This is your once in a lifetime chance to race the Baja 500 or Baja 1000, with everything you need to compete for the class win in one easy to get package.

The trailer began life as a 2004 Forest River 48' triple axle Race Car trailer with living quarters. Upgrades since then include the custom roof top deck with dual EZ ups and fold up couches, dual air conditioners, satellite internet connection, dual 32' flat screen LCD TV's (one in the shop side to track the truck, one in the living quarters side so the kids can watch movies), computer, wireless network, Onan 7.2 KW Generator, built in air compressor with outlets on the race side, 100 Watt Race Radio, built in tool boxes, work space, interior and exterior work lights, etc. Currently wrapped in Long Beach Racers / Blue C livery, it's all white underneath so you can add your own graphics or just be stealthy.

Your sponsors will love the view from the rooftop deck, and media at the races love to use it for camera backdrops, vantage points for crowd shots, and the wireless internet to file articles, so they'll be sure to give your team the exposure your sponsors need to keep you racing. Our Tow rig is a 2000 Freightliner FL60 extended cab with a custom hauler body, Cummins 5.9 commercial grade diesel engine, Allison automatic trans, Pioneer DVD Navigation and sound system with ipod connection, XM radio, and backup camera. Dual Air seats up front make pulling the trailer down to Mexico or across the country a pleasant experience.

Topping it off is our Baja 1000 winner, 2004 SCORE Class champion Tacoma off road race truck. Built in 2001 and updated in '07 for 7SX, this is one of the cleanest and fastest trucks in the class. Freshly prepped by Solo Motorsports, it's all TIG welded chromolly. Fresh Nogrady 3.4L V6, Fresh Rancho Trans, Cone full floater, Brembo and Wilwood brakes, Hella HID's, BFG Projects, American Racing ATX wheels, Kenwood Radio, PCI Intercom, AEM ECU, Sway-A-Way triple bypass & coilover shocks, Deaver & Eibach Springs, Air bumps all 4 corners, GIANT Garmin GPS. We've spared no expense to give this truck the best of everything. This truck has been first, second or 3rd in SCORE points for the last 3 seasons, and it's ready to win the Baja 500 or 1000. Comfortable, fast, and clean.

Spares include 20 American Racing ATX wheels with new BFG Baja TA Project 35"x12.50"x15 Race Tires, multiple steering racks, springs, shocks, axles, etc, etc,
Everything is available for your inspection in Long Beach, CA at the Long Beach Racers shop.
Price: $120,000 or best offer (Will trade for Trophy Truck or Toyota-Powered Pro-Truck).
Building the race truck alone from scratch would cost this much. Putting a whole race team together with spares would cost at least double that. As a plus, we've worked out all the bugs and tested everything so it's ready to enjoy.
Please call or e-mail BillMoncure@aol.com or 562.472.7656 with questions. More photos at http://www.longbeachracers.com/ What are you waiting for?
Baja Racing News.com
Posted by black e media at 6:00 AM Links to this post