Baja Racing News.com would like to point out some details to a recent claim about the level of security for the November running of the Baja 1000 in Ensenada.

Here is the claim in "quotes" and our [Baja Racing News.com details]

"At a 'recent race' drivers meeting the Secretary of Tourism of Baja California, Nico Said on behalf of the Mayor of Ensenada, Oscar Ramos, and Sal were very clear about the level of security that would be provided at the Mil (Baja 1000 race)." [A reporter of Baja Racing News.com was at the meeting and NO details were provided. Only general, verbal claims.]

"The effort they are putting in to provide a safe racing experience in Baja is unprecedented. New cops, paying overtime to work MANY extra policia, surveillance cameras," [There is precedent for their actions. Previous sports meets during this very high criminal episode in Baja, the Mayor of Tijuana ASSURED and GUARANTEED safety and security. NO SUCH ASSURANCE NOR GUARANTEE has been provided for the Baja off-road racers]

"new tourist hot lines including 911, Yes they even changed their security numbers for the whole of baja to accommodate us and 911 will connect you to their emergency operators. If you dial 911 you will get an English speaking operator as well" [Completely and utterly false with the malice of forethought to fool Baja racers. NO NEW SYSTEM. The system mentioned here has been in operation for five years. The system was, in fact, driven to reality by a series of meetings between the State Department of the USA, the State Office of Public Safety and Tourism Department of Baja California. The Mexicans DID NOT initiate this discussion and action. IT WAS THE AMERICANS. AFTER Americans died in tourist events. Representatives of Baja Safari Mexico Club initiated and facilitated the meetings, we know what the facts are. Both governments couldn't care less if you DIED IN MEXICO! Or whether your body gets back to your loved ones. Just ask the Hall Family.] [Regarding whether the system works the day you need them. Who wants to be the first racer to test it? Step Up Now, don't be shy!!!]

"Seriously they could not be doing much more than they are to welcome us back." [Not lying about the situation would be a good start. Officials in Baja California have been lying through their teeth ever since 1988 about the nature of the crime situation. They even admitted so, over this summer, 2008.]

"Bad things still happen to people and life is a gamble but they are trying very hard down there to protect us." [Anytime someone says this line, you know you're in trouble.]

"The DA travels together and never lets anyone go anywhere without a HUGE presence." [An admission of known truth. Why HUGE? Because you CAN lose many things, including your life in Baja Mexico, NOT racing.]

Don't get us wrong racers. Baja Racing News.com WANTS you to race in Baja. But, we also want you to know what the real risks are. There are many others, who don't want you to REALLY KNOW. For those of you who are new to Baja reality, read THIS.

UPDATED! October 12, 2008
In a statement on the 2008 Baja 1000, SCORE comments:
"We have been assured by the Mexican government that we will have the same increased security presence from the Mexican Army, Mexican Navy, Federal Highway Patrol, Federal Police, State Secretary of Security, National Immigration Institute, Customs Officials, Local Police & Firefighter enforcements and the Green Angels that we sincerely appreciated and enjoyed during both this year’s Tecate SCORE San Felipe 250 and Tecate SCORE Baja 500."
NO GUARANTEES
It takes an army to secure the Baja races anymore! SCORE has been 'assured' the noted enforcements will be in place. Good News. Baja Racing News.com wants to make it clear, the FEDERAL units can be trusted. NONE of the State units should be trusted and the local enforcements are a 'take your pick' of trust. NO trust can be given to any Ensenada local police. So, there we have it, the security situation is a patchwork of agencies which should disuade any overt criminal acts. However, all International travelers should have their own security plans and NO ONE should ever travel alone.
Because, as members of the (Famous Las Vegas Racing Family) team found out at the 2006 Baja 1000, you can get choked out and burglarized just walking down the streets of Ensenada and you can have your travel bags stolen at La Paz International Airport in broad daylight, right in front of you, even if you are part of the protected, famous, rich American off-road racing privileged.
The State Tourism people are doing the best they can, but they are only a 'promotive' service. Not a protective service. The Federal Highway Police are your best bet for protection, because they communicate directly with the Mexican Army and they are responsible to Mexico City. And they have heavy weapons.
The new (ID) documents required by SCORE are really being mandated by Mexican customs and Immigration. They want to make sure YOU ARE NOT CRIMINALS! Of course, American racers won't tolerate such BS.
Maybe, we may now only be concerned about the RACING RISKS! Too bad it took over a year to get to this security awareness, with just over 300 entrants for this race, this security failure has taken a big bite out of SCOREs bottom line and reputation.
Now, suck it up, Mr. Badass Baja Racers! We'll see you in Ensenada! Where's Jesse James?!?! 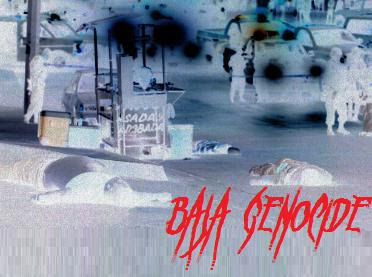 GO TO THE UPDATED STORY HERE
Posted by black e media at 9:33 AM Links to this post

CLICK HERE: Illegal Ways To Avoid The Border Wait
Posted by black e media at 7:28 AM Links to this post 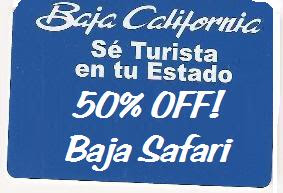 Baja Safari Mexico Club and the Tourism Department of Baja California announced this morning, the Baja Safari 50% OFF! Program for International Visitors to Baja, Mexico

Participating Tourist related business in Baja California, Mexico are today offering 50% OFF! all Tourist related services. Be sure to confirm with the business they are particpating with the Baja California Tourism Department to offer the Baja Safari 50% OFF! Discount, before you decide to spend your BIG AMERICAN DOLLARS. Just present the card that you printed from this EXCLUSIVE! Baja Racing News.com story and you'll get the total bill cut by 50%! Courtesy of Baja California's Tourism Department. We'll announce when the program has ended, so get your $aving$ on now! Perfect for pre-running and racing in the Baja 1000 this year!
CLICK HERE for a clear entry Map into Baja California through Tijuana
Do you have questions about the program? Call Baja Safari at 619-251-9486.
Posted by black e media at 11:30 AM Links to this post

CLICK HERE FOR THE DIGITAL EDITION OF STYLING & PERFORMANCE THE OFF-ROAD EDITION
Posted by black e media at 8:18 AM Links to this post

Posted by black e media at 8:00 AM Links to this post