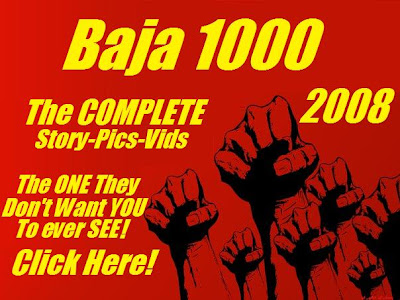 Posted by black e media at 11:55 PM Links to this post

A great BBQ, Buggy Works open house and Christmas Toy Drive had the crowd busy and looking forward to the MDR Superstition Series Dunaway Dash race pull that went off in the afternoon. The supporters of the event had displays and products to make the new racing season a winner! SEE Race Pull RESULTS HERE

Posted by black e media at 11:57 AM Links to this post

Some say 2009 will be a 'correction' year. But, what kind of a correction? In the business of Baja racing, 2009 will turn out to be a restructuring year. The racing options for teams are down-sizing and sticking closer to home. In the 2009 racing schedules, there are actually more places to race in the states in off-road, than 2008!

Some Baja racing teams have decided to sit out 2009. Whether for money reasons or family reasons, many teams will be back in 2010. The southern Baja racing association is an example of how bad the money situation is. Last week, they had their end of the year banquet and they ran out of food. The racers are shocked and the race organizers are hiding from public view. It's the old saying, when the United States has the flu, Mexico is on deaths doorstep.

The bigger picture in world-wide racing series, gives off-road a clue to 2009. "Fuji Heavy Industries, the maker of Subaru cars, said yesterday it would pull out of the (WRC) world rally championship citing the global economic crisis.

Subaru joins fellow Japanese automaker Suzuki Motor, which announced its exit a day earlier, and leaves no other Japanese automaker left in the race. Carmakers all over the world are under severe pressure to reduce spending as they bleed cash due to a sudden downturn in global car demand. Honda, Japan's No.2 automaker, this month quit (F1) Formula One racing for similar reasons." The NASCAR news is filled with layoffs and major program cuts. MOPAR opted out of desert off-road racing late in 2008. Automakers have been dropping out of racing left and right recently. Audi and Porsche dropped out of the American Le Mans Series. Unfortunately, Roger Penske –who spearheads the Detroit Grand Prix nixed the '08 event, he happens to race Porsche RS Spyder Le Mans cars.

With the loss of his racing team and Detroit’s overall economy, Penske and the Detroit Grand Prix board decided not to host the event in 2009. Penske says “We have the assets to continue on, but there’s no reason at this point to have an event that wouldn’t be first-class.”

Baja Racing News.com is well positioned for growth in 2009. We will not cover stunts or any self serving racing ventures. There are plenty of great desert off-road races to cover and we know, by our exploding numbers, the readers have noticed the traditional races we cover. We'll take Bud Ekins over Evel Kneivel anyday!

Our readers know why they visit, they want an honest sports report about racing in desert off-road races in Baja, Mexico. All the BS puff pieces can be found elsewhere. Baja Racing News.com will report the inside information and racers wild life stories, daily. The haters will continue to complain about us, but read'em and weep gents...We continue to be the #1 Baja Racing internet search result in the world!

Our Armed Forces Around The World Happy Holidays! 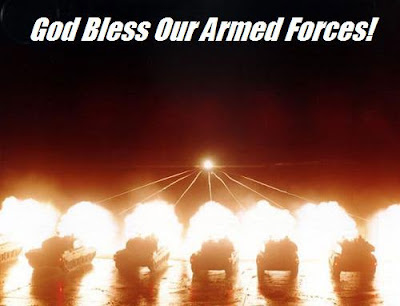 God Bless Our United States Armed Forces Around The Globe! Merry Christmas from Baja Racing News.com You are in our thoughts and prayers. Thank you for your cherished service to our people and our country.

Posted by black e media at 7:07 AM Links to this post

Unknown to many racers in Mexico, the drug culture of Baja Mexico, stands next to racers during the races. The victims, pimps, drug runners mix and mingle with the "runners of the races". Americans often hire and transact business with the very people driving the drugs into the United States and responsible for the thousands of murders in Baja Mexico.

Here is a race report showing how close the Baja racers are to the death business, in Mexico. Team report: "San Vincente pit was surreal. Dozens of campfires and an ongoing mexican battle of the bands (via car stereos). We were parked between a class 12 chase team and a group of mexican spectators. Lots of laughter and the locals soaked up plenty of suds. A group across the course had their music so loud one of the guys from the class 12 group asked them to turn it down so we could hear the radios. They did, for a couple of hours then it went back up. One of the locals next to us said he knew how to quite them down and pulled an AK 47 from his truck. We told him that wouldn't be necessary and had a good (although somewhat tense) laugh as he put it away.

Most intense time for me was when Mike and I were standing at the finish line. Lance radioed in that he was 10 miles out then the handheld radio died, battery was dead. We didn't know what else Lance was going to say. Of course the thoughts of the car stuck or stopped or broke abounded. No other radios even close that had our frequency. No other handheld in the area with a battery we could borrow. Mike made a call and said tracking showed the 1700 still moving but after listening all night to the tracking delays and errors it was a tense 15 minutes. Then I heard that wot and Lance turned the last corner. Wow, what a relief.

Sadly, according to the Sunday Ensenada newspaper , on Saturday 3 guys at the Yonke (wrecking yard) who had given me Valdez Transmissions name and address were murdered. The pic showed the exact spot I had been standing just a few days earlier." 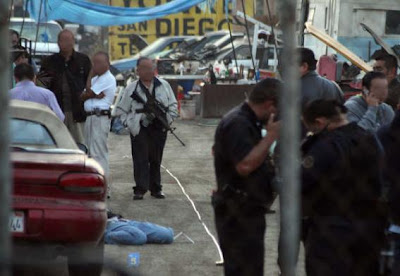 Posted by black e media at 7:43 AM Links to this post

Posted by black e media at 9:37 AM Links to this post 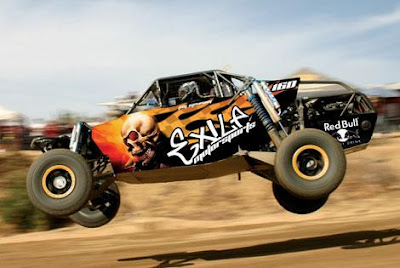 News from the Great White North. Bigfork Montana. Bigfork's Terry Leonard and Jay Manning left Novembers southern Baja off-road race in Mexico with the confirmation that a bad day of racing is still better than any day at work. However, they would have rather left with the first place finish it looked as though they had secured halfway through the race.
"The moral of the story is that it's always a good day racing, even if you don't finish," Leonard said. "It's always fun."

Registered under the name Team Exile, Manning and Leonard, as well as Roberto Zavala, also of Bigfork, competed in the race in the class one, unlimited open category. Their car is a Jimco Series 2000, which is specifically designed for racing. They do most of their own work on the vehicle, except for some of the engine work.

"The car we run isn't just a dune-buggy," Leonard said. "It's the equivalent of a NASCAR stock car if you threw knobby dirt tires on it and raced it in the desert."

The course took them from the coast of Cabo San Lucas up and over the mountains and down the other side to the coast. The Cabo races are unique compared to most of the desert races in all over the southwest, because of its hills and technical aspects, such as numerous tight turns.

Two members of the team are inside the car during the race. Manning, who has 15 years of desert racing experience, is the driver. Leonard and Zavala take turns acting as co-pilot, helping Manning with navigation and logistics, and acting as sort of a coach during the race. Leonard started desert racing four years ago, but he grew up racing dirt bikes and his dad was a professional dirt track racer for Harley Davidson.

"There's something surreal about strapping yourself into a vehicle that is going to go over 100 miles per hour over dirt and rocks," Leonard said. "It's like being five years old and having a dream come true. Even after the race when you're bruised and battered everyone still has a smile on their face."

By halfway through the Cabo race they had passed all but one of the trophy trucks that were ahead of them. As they approached the final truck they could smell it burning oil, and they knew they would be moving into first place. But as they passed the truck they shattered the front right rim of their car. Luckily they had a spare tire, and within three minutes were able to get back to racing. While making the repairs Team Exile was passed by a few vehicles.

"It was like a flaming red tape for Jay," said Leonard, who compared the dust trails they see as they approach vehicles on the track to a red flag being waved in front of a bull.

Unfortunately, while they were in the process of catching up, they slid into a boulder and popped their rear left tire. Since they had already used their one and only spare, they had to nurse it until they got to a pit area. Once there they had to find a team to borrow a tire from, since their pit was located at a different area. They put the borrowed tire on and headed down the course to their pit area. There they refueled the car, but found yet another problem.

During the race they had fried two or three coils on their engine and had lost a significant amount of power. At that point Manning and Leonard decided to drop out of the race rather than risk burning up the engine completely.

"It's a lot easier to swallow when you're not doing well and you have to pull out of the race," Leonard said. "It's a lot harder to deal with when you know that your vehicle and your driver is superior to all the others. Jay is a master with that car. Without a doubt if everything was going right we would've come out on top. We were able to pass any car out there."

But they made the best of it. They drove down the road and stopped their race car at a convenience store. Still dressed in their race gear, including their helmets, they went into the store and bought beer and burritos for their entire crew and met them at a nearby bridge to watch the rest of the race.

"It's a blast," Leonard said. "I love southern Baja, Mexico and I love racing. The racing is mind-blowingly scary and amazing. But I also just love the Mexican people. They are wonderful and the food is great."

Team Exile has had several successful races this season. They have collected first place finishes at several southern Baja races. The CABO 500 and the new CABO 1000, all in Cabo San Lucas. They are planning on competing in their next race some time in February.

Baja Racing News.com
Posted by black e media at 6:20 AM Links to this post