Jean-Paul Cyr on 2009, ""For me it's a learning-charge-your-battery-focus-on-Thunder-Road-race-the-Baja-and-not-get-killed-type of year." 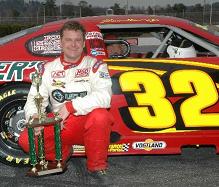 In American-Canadian Tour racing, there isn't much left for Jean-Paul Cyr to accomplish. He holds the record for all-time and consecutive ACT championships, at seven and five, respectively, ranks a close second in all-time ACT Late Model Tour race victories, has won all of the major events on the schedule at least once, and is a past recipient of the Don MacTavish Award for lifetime contributions to motorsports. Prior to that, he had been a track champion on the Devil's Bowl Speedway dirt in Fair Haven and a top independent competitior on the NASCAR Whelen Modified Tour. And for nearly the entire first decade of the 21st century, Cyr has been the face of northeastern Late Model racing.

Baja Racing News.com
Posted by black e media at 6:34 AM