RACE OVER! CLICK HERE NOW FOR THE LIVE! WEBCAST FROM LAS VEGAS! 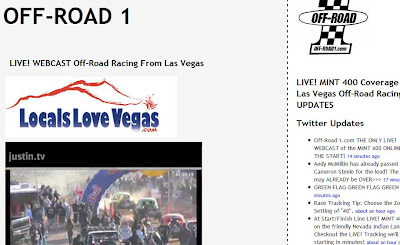 The FIRST LIVE! WEBCAST of the MINT 400 In History! 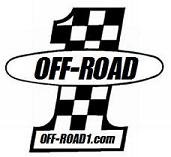 Posted by black e media at 5:48 AM Links to this post 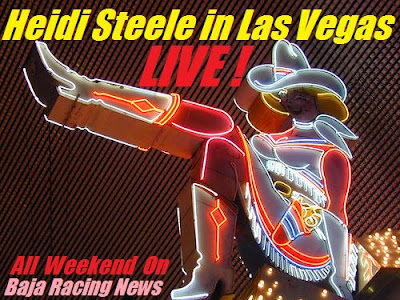 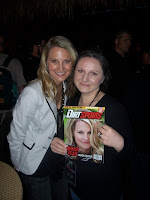 Even with mandated tracking, "Baja Racing" is alive and well. "The most Dangerous and Notorious Racing In The World", continues in the open deserts, of off-road racing in Baja Mexico. 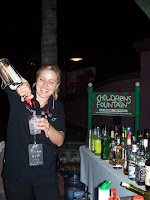 "It's pretty sweet....I think Robby Gordon got my SPOT deal...good thing he wasn't running it at San Felipe..." Cameron Steele talking about his wife winning Driver Of The Year and his losing a race tracking sponsorship.

During the 2008 Baja 500, the Desert Assassins Heidi Steele, was reported short-coursing into Ensenada on the final leg of the race. "Equipment problems" was cited as the reason for the signal loss, when a simple yank of a cable, ended the public showing of the location of the race truck.

But, the onboard race tracking recording continued, inside the French built unit. The tracking signal on her truck vanished from public view, once she neared the asphalt, meeting the Ensenada to San Felipe highway. Originally reported, CLICK HERE TO SEE SCams TEAM SPECIAL EQUIPMENT!

Baja Racing News.com, as always, was LIVE, during the 2008 Baja 500, with reporters on duty, to witness the happenings. When the critical finish of the 7SX class competitors came into question, no one wanted to publically answer those hard questions.

We challenged the Steeles to PROVE Heidi Steele won her division, in 7SX at the 2008 Baja 500, by next Friday, March 27, at high noon, Las Vegas time. They failed.

We've already confirmed Heidi Steele DID NOT win her class at the 2008 Baja 500. Without the Baja 500 win, the entire false basis of the "Driver of the Year" award, exposes the sport and the industry that supports it.

Here's the hype the world may not understand fully:

"The Desert Assassins Press Release: ANAHEIM, Calif., March 21, 2009 ---Heidi Steele was named "Driver of the Year" by DirtSports magazine during its award celebration in Anaheim, California. The coveted title was presented to Steele, the first woman in off-road racing history to receive the prestigious honor, besting some of the top names in desert racing including Robby Gordon, Cameron Steele, BJ Baldwin and Rob MacCachren.

Heidi Steele, who began racing in 2004, has quickly made a name for herself in the male-dominated sport. She won three titles in the grueling terrain of Baja California, taking first place in her class at the Baja 1000 in 2005 and two first place titles in the Baja 500 in 2005 and 2008. In her first four years of racing, Steele also has won two SCORE championships and one Best in the Desert championship.

"To be recognized and honored with such a prestigious award among the many talented drivers in off-road racing is truly unbelievable," said a surprised Steele. "I am grateful that DirtSports has taken more and varied factors into consideration for the 'Driver of the Year' award, including winning two championships in one year and the challenges of competing in a more limited class. This award gives hope and inspiration to so many drivers that you can be recognized for your racing abilities regardless of the class you may race in currently."

An executive from San Clemente, California, Steele fell into the sport of desert racing through her trophy truck-racing husband, television commentator and sports announcer, Cameron Steele. For the past three years, Steele has successfully competed in the semi-limited mid-size truck class. She recently moved up to the ultimate mid-size truck class, taking on new challenges and stiffer competition.

March 21, 2009 (Anaheim, Calif.) -- In the 2008 off-road racing season, racer Heidi Steele firmly established her place in the sport’s history by becoming the first female to ever win two major championships in the same season. Tonight, Steele made her mark on the record books for a second time, becoming the first women ever to earn the prestigious “Driver of the Year” title by Ryan Communications Group’s (RCG) Dirt Sports magazine.

“The process of selecting our “Driver of the Year” is a difficult one, as each season there is always so much great talent to choose from,” explained Marty Fiolka, group editorial director, Ryan Communications Group. “However, in light of her great and historic achievements during the 2008 season, it is an honor to bestow this award to Heidi Steele. She is not only a champion driver, but an outstanding person that really represents the very best of the Dirt Sports Nation.”

In choosing each of their past winners, the panel of judges make their final determinations based upon drivers posting a championship performance, their ability to represent both the sport and their sponsors in a professional manner, and their ability to rise above the competition in a significant manner.

“It’s an incredible honor to be named Dirt Sports Driver of the Year, a true highlight in my five year racing career considering the many talented racers in the various off-road racing series. I am grateful that Dirt Sports has taken many factors into consideration for this award, including winning two championships in one year and the challenges of competing in a more limited class. This is a truly amazing and unforgettable feeling,” said Steele, who received her honors tonight at a special ceremony at Anaheim’s Menage Hotel co-sponsored by Bully Dog, Speed Technologies and Blue C Advertising.

As part of their award, winners grace a special edition of Dirt Sports magazine via special photo shoot by noted photojournalist Boyd Jaynes. The “Driver of the Year” feature will be part of the magazine’s just-released March/April 2009 issue, which is being mailed to subscribers and available at this weekend’s Off-Road Expo in Pomona, California, as well as next week’s SNORE General Tire Mint 400 in Las Vegas.

"Off-road champion Heidi Steele has made history...again. First, the Yokohama Tire Corporation-sponsored racer cemented herself in off-road history last year by being the first woman
to win two major truck championships in one season - the Best in the Desert and SCORE. Now she's been named Dirt Sports magazine's 2008 Driver of the Year, becoming the first female to win the coveted award.

"This is a truly amazing and unforgettable feeling," said Steele of San Clemente, California, who is married to off-road champion and TV commentator Cameron Steele. "To be recognized and honored with such a prestigious award among the many talented drivers in off-road racing is
truly unbelievable. I am grateful that Dirt Sports has taken more and varied factors into consideration for the Driver of the Year award, including winning two championships in one year and the challenges of competing in a more limited class. This award gives hope and
inspiration to so many drivers that you can be recognized for your racing abilities regardless of the class you may race in."

Added Mark Chung, Yokohama Tire director, corporate strategy and planning: "Heidi is a phenomenal competitor who had an amazing year. The award is much deserved and well earned. Congratulations to her and her team. We're proud to be associated with Heidi and Cameron and look forward to more championships and awards in 2009."

Here's the Sponsorship Scam Steele says WAS HIS, (Steele was sponsored by SPOT for a short, obviously, very unproductive time) that Robby Gordon announced this week, after the San Felipe 250 race course hoopla CLICK HERE

The Desert Assassins, the same group who are in court suing fellow Americans about THEIR behavior in Mexico while racing! CLICK HERE FOR THE EXCLUSIVE

CLICK HERE FOR THE Desert Assassins/Metal Mulisha Assault on a off-road photographer at the recent San Felipe 250 2009, in Baja Mexico

Posted by black e media at 3:30 AM Links to this post


Posted by black e media at 5:48 AM Links to this post