2009 CANCELLED NORRA Mexican 1000 UPDATE from La Paz Baja South Mexico, Rumor denied by Historic racer and NORRA is in process, will have race in 2010 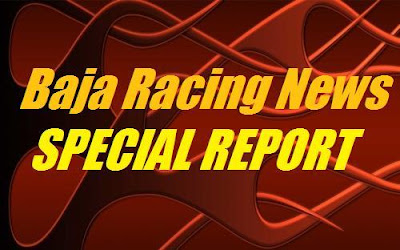 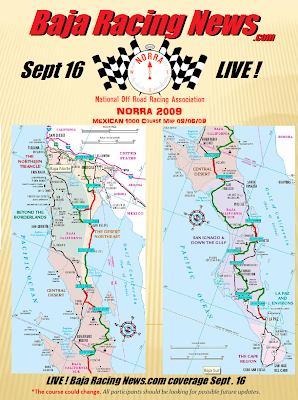 "The National Off Road Racing Association (NORRA) announced today the postponement of its forthcoming Mexican 1000 Rally scheduled for September 16-20. In the aftermath of the violent hurricane which affected a major portion of the Baja peninsula, NORRA officials and Mexican authorities came to the difficult decision to postpone the rally until early 2010.

"With 1000's of people still requiring assistance and the most basic of necessities, it would be terribly disrespectful for NORRA to hold an event at this particular point in time and tax the resources and people of this wonderful peninsula", said NORRA co-founder Michael Noval. "While NORRA appreciates the incredible outpouring of support and enthusiasm for the Mexican 1000 rally, in the end the decision to reschedule the event for 2010 was an easy one for all concerned.
It is simply the only correct thing to do".

Hurricane Jimena affected a large portion of the Baja peninsula when it made landfall on September 3, 2009, Areas surrounding the towns of Mulege, Loreto and Cuidad Constitution were devastated, including damaged roads, lack of electricity and running water. For the immediate future, NORRA will provide assistance to the ongoing relief efforts on the peninsula. As Baja recovers, NORRA will continue to provide updates on the new date for the Mexican 1000 Rally.

NORRA urges all participants, racers, and the off-road community at large to pitch in and lend some support to our Baja neighbors. NORRA is actively seeking donations of clothing, canned food, dry goods, basic shelter (tents, tarps etc) and financial support. Now that the event has been postponed, a list of drop off locations will be posted on its website as they receive and confirm details with interested volunteers.

For more information, questions and/or comments, please contact Michael Noval at 325-258-39134, or visit the NORRA website: www.norra.com or send email to: info@norra.com to receive information about the items in greatest demand."

If you have any questions or would like a pre-tech inspection, please contact Dave Philhower or call Mike Noval at (323) 258-3034.

In Mexicali our headquarters will at the Colonial Hotel. Call them at 1-800-437-2438 or email to reservaciones@hotelscolonial.com for reservations and information. The continency area will be less than a mile from the hotel at Parque Vicente Guerrero. See the map of Mexican 1000 locations in Mexicali.

NORRA headquarters will be at Grand Plaza Hotel & Suites. For reservations and information call 1-866-357-9711. Their web site is www.grandplazalapaz.com.

""MAG 7 Pits Services for NORRA Mexican 1000, will be providing pit support for the Mexican 1000, Full support is being planned, please stay tuned for developing details.""


""E85 Carburetor stuff...a little update... with some of our latest higher profile entrants....

We have some vintage Husky's entering
The Banshee, "The Edsel", The Grabber GT Olds, Big Red, Funco's, Manx Buggys and others.....

For the truly adventurous among you there is the NORRA Buell Ulysses Challenge Cup, an event within the event, limited to 50 riders worldwide.""


""Some folks must think I sound like a broken record with my E85 schpeils....As a starting point for carburetor jetting, a good baseline rule of thumb is to go about 30% fatter than what you are currently running. If you know any hot rodders or drag racers, they may also be able to help as many of them still run alcohol classes, and that is functionally what we are talking about. Idle speed mixtures may be trickier, but if you have manual choke you may need to play with that a little bit.... also when testing, if your vehicle has an electric starter, you'll want to have backup batteries fully charged . Not to throw at me, but to swap out in case your jetting combinations are giving you hard start conditions.

These are just some general parameters offered up for your consideration. Remember we are also honoring the hot rodding roots of Off Road, so there will be some trial and error and experimentation involved. Personally, some of that hands on learning process has been the most fun for me.

I offer this up just for general info, hopefully it will be helpful. Please don't think I'm trying to be "preachy" or anything like that.""


""We are trying to work through the details of just how we can open it up to newer bikes and still have it true to the roots and original concept of the event. We already are developing an "Improved Technology Class" for the bikes between 1975-1989, technology breakpoints for monoshock and laydown shock swingarms... But you aren't alone in asking that we just kick the doors wide open for all to come and ride. That may happen depending upon the level of interest.

Many folks wishing to run modern hardware are doing E-85 conversions, that is the fastest way to run anything you like as the class is a wide open class.""


""We are opening the "vintage" bike classes up to 1989. This event is all about having some fun. Our website will be updated soon... famous last words, because as you can well imagine things are accelerating as more and more folks are contacting us about what vehicles they can run.

**Remember also the "Alternative Fuels Technology" Class..... an OPEN class with no vehicle age restrictions, Hint: think E-85 conversions... change some fuel mapping, injector pressure if running FI and voila! good to go. I don't have specific carb jetting conversion factors.. but I'm sure they can be found if you're interested.

If anyone has a question, I'm glad to answer here publicly. We are for real, we are going to run the event, and in the meantime, we'll just continue marching down mainstreet at high noon, trying to draw attention to the event and how we hope to recapture some of the original pioneering and hot rodding spirit of the Off Roading Movement.""

Baja Racing News.com broke this original story reported on March 29, 2009. Since then, NORRA has been blocked starting in Ensenada by SCORE.

NORRA has only talked about a handful of names intending on participating in the rally.

Sr. Becerril, the Baja South Tourism Official, told Baja Racing News.com last week the event would be approved, reports of conflicts with SCORE and their plans to run to Baja South for the 2010 Baja 1000 are rampant here in the capital of southern Baja state, La Paz. SCORE does not want NORRA to spoil its Baja 1000 2010 plans. (Stay tuned here we have found out what the Governor of Baja Sur wants to do with SCORE for 2010)

The reports are that the Baja Sur governor, has already been paid by SCORE to allow the 2010 Baja 1000 and that any other 'American' race in Baja Sur, prior to the November 2010 race, would conflict with the Baja 1000, planned by SCORE, for 2010.

Pictured right, is the state of Baja California (Norte) and 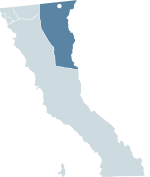 highlighted is the Municipality of Mexicali. The rest of the rally route to Bahia de Los Angeles (in Baja Norte) and south to Loreto (in Baja Sur) and the scheduled finish at La Paz.


The only reason NORRA is using Mexicali is because SCORE blocked NORRA from starting in the town center of Ensenada and the off-road racing association of Mexicali granted permission for NORRA to use "its" territory. Which runs down to San Felipe on the Sea of Cortez side.


Weather. September in Baja Mexico, Have you ever raced in a Furnace? Obviously, the organizers of this event are NOT true Baja people.

CLICK HERE FOR today's Mexicali weather. In the old days, resorts deep in Baja Mexico closed for the month of September. All of September. Why? Simple, the heat, with average temperatures throughout the Baja peninsula during September are over 100 degrees F.

Depending on your exact location, the temperature can be well over 100 degrees, like the dry lakebed of Laguna Salada. There's an old Mexican Army general still in prision for the deaths of troops under his command on the Salada, when the temps killed them. During a well known sports event some years back, several competitors had to be choppered back to San Diego for heat effects almost killing them.

The other reason they closed, tropical storms. MORE ON THIS LOADING>>>

Insane Factoid: The highest temperature ever recorded in Mexicali was 52°C (about 126°F, with an estimated heat index of 142 degrees F.).

The distributed rumors of a "major, historic, Toyota Baja racer", "for sure", running in the planned September Mexican 1000, are false.

Baja Racing News.com invites NORRA at any time, to talk to the press about its rally. Otherwise, keep up the releases in a timely fashion.

CLICK HERE for the last report from La Paz

Posted by black e media at 1:45 PM Links to this post

Posted by black e media at 6:22 AM Links to this post


Posted by black e media at 6:15 AM Links to this post 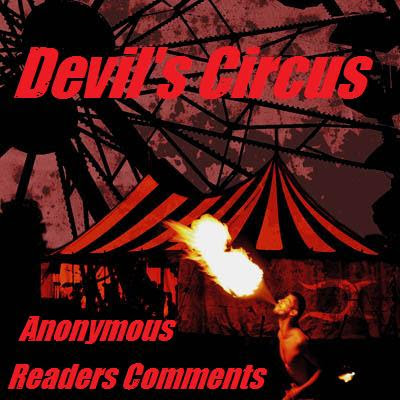 Pat Dailey, a bloated overexposed nobody, has such a thin skin, we'd thought its time to make fun of him! Especially after numerous emails to us lampooning the goof!


After just one public comment funning on Pat Dailey Motorsports, Pat "El Douche", goes online as sez: "Just sucks to look at my phone while I am on vacation and see a bunch of texts saying my "friend" Dub is talking s*** about me on a public forum."


Thats nothing Pat, here's what people have been saying for years:


"What a loser, first his failed business implodes, then he expands his failed motorsports effort. FAIL!"


"Met this douchebag at Primm, could not believe what a blown ego monster this shitbag is, seriously, if you sponsor this shithead, BullyDogShitter, you must HAVE NO IDEA WHAT YOU ARE DOING! and in that case boycott bullydog, it must be shit if they back DGAF Pat Dailey"


Desert Racings Crackheads support Pat Dailey. Check out this gay development they posted themselves! Guess whose voice is on the tape, giggling & cackling like a bitch? Patrick Dailey.


Another Anonymous Reader Reports:
"Roger Norman Motorsports supports the Desert Racing Crackheads! What Meds is Roger on Anyway!?! So that's why Nugent got hit at the Baja 500 2010! "


SEND YOUR ANONYMOUS COMMENTS JUST CLICK ON THE LETTER ICON

Posted by black e media at 10:35 AM Links to this post