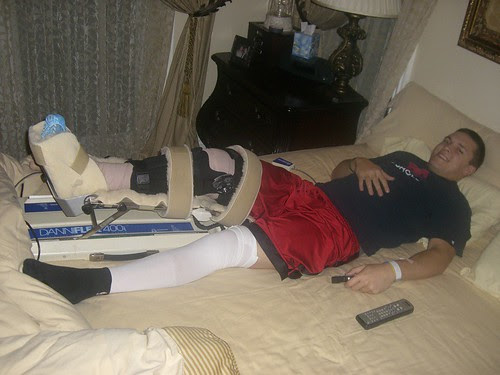 He threw dirt and rocks with his 800 horsepower racing truck at the LVDC crew at pit number 3. Here's what Andy said, "I was frustrated not being able to get around TJ's car with Kevin Colan driving for awhile before coming into that pit, and I let the frustration get to me. I know I put people in danger and it was a dumb, bonehead, immature thing to do. (My co-driver even called me a dumb idiot as we left that pit) I guess I just can't explain being in the heat of a moment like that during the race, and I would really take it back if I could! It was dumb!"

McMillin team driver of record, Andy McMillin, has been accused of immaturity and in an attempt to counter the charges, he now lists his name on the driver of record paperwork in the races he enters as, "Andrew" McMillin.

His admission that he "let the frustration get to (him)me", occurred at a time in the race, when he was eating lots of dust from the leading LVDC unlimited buggy. Andy wasn't following just anybody. The LVDC team, with TJ, Danny Anderson, Kevin Colan and Pat Dean, is considered one of the fastest desert, off-road racing teams in the west.

The McMillin's haven't raced in Baja Mexico in years. They have bought into new Geiser trucks, Andy's truck has two engines. One, a sprint race motor and the second, a "race motor", used in more challenging terrain races.

As the McMillins have not raced in Baja in years, the Mark Post, Riviera Trophy Truck #3, the Roger Norman Trophy Truck and the Robby Gordon Motorsports Team have basked in the glow of Baja desert, off-road racing victories. 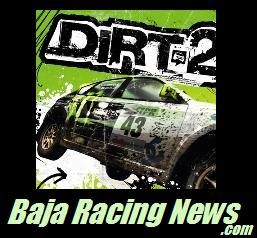 Baja Racing News.com and Gamezine gets our hands-on Codemasters' latest off-road racer DiRT 2. So today we were lucky enough to visit Codemasters and get our hands-on with DiRT 2; the off-road sequel to the critically acclaimed 2007 racer.

First off the bat, you might have been impressed by DiRT's front-end menus, but DiRT 2 really does up the ante with a real-time festival event framing the game's selectable options. 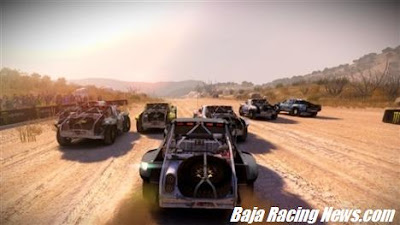 Head into your personal RV, choose your event, and check out your gathered souvenirs from each of the countries you've visited; USA, Japan, Malaysia, Baja, Croatia, London and others are included. DiRT 2's graphics certainly look spectacular, building on 2008's GRID (showing the scant amount of time Codies had to create the game) with lush jungles, shimmering water and dirt being sprayed all over your windscreen.

The Baja racing sections are the most realistic ever produced for gaming. Even the old-timers will think they are racin' the Baja!

Head into the cock-pit view and you might notice one of the toys you've been awarded during your racing career, such as fluffy dice or a skull (it's eyes roll to the bumps of your racing). From stadium racing in the US, to driving through Battersea in London, and canyon racing in Utah, to rallying through Malaysian rainforests; the game's locations are varied, with each sporting its own festival, DJ soundtrack and unique atmosphere. 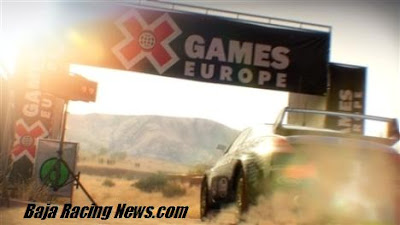 It's good to see that the team has answered gamers and critics alike with their online multiplayer: by adding 8 player online (the number is not due to technical limitations; play-testing discovered that this was the perfect number) to the first game's solitary experience, competitive racing is in.

Choose any car, any track and any mode from the outset and find that you can start your online racing with wither all the cars leaving the start line at the same time, or in a staggered realistic rally race, where you can play cat and mouse with the other drivers. Other notable inclusions include the X-Games license, which brings an extreme sports feel; the flashback re-wind of GRID; and night time racing.


The last inclusion is important, due to the night racing showing off the game's deferred rendering; a feature Codies has been working very hard on. Like Killzone 2, this technique allows the game to sport multiple light-sources to bring the track to life, and on the night-time London track we played (Battersea), it was definitely impressive. 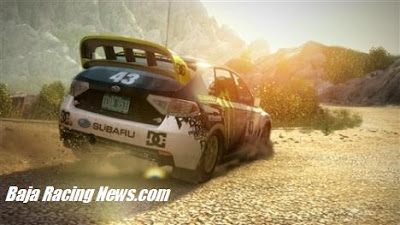 Though the late great Colin McRae is no longer with us, DiRT 2's design is still inspired by him, prompting a move into more extreme sports and even resulting in the Colin McRae Memorial Challenge at the end of the game, which is tough, very tough.

Codemasters, a leading developer and publisher of acclaimed racing video games, and ESPN's X Games, has announced an agreement that will see three all-new X Games stages created and integrated exclusively in DiRT 2, the sequel to the award-winning off-road racing title.

"With DiRT 2, Codemasters has captured the essence of contemporary action sports racing, making the game a great platform to integrate the X Games brand and the look and feel of its global events," said Rick Alessandri, ESPN Senior Vice President and Managing Director, X Games Franchise. "We're excited that millions of players will have the opportunity to engage in the X Games environment both in the game and online."

"We've been inspired by the flair, style and big event atmosphere of ESPN's X Games series, which has switched on a new generation of action sports fans to rally and off-road racing." said Gavin Raeburn, Senior Executive Producer, Codemasters. "It's been incredible to work with them to shape a series of exclusive X Games integrations for DiRT 2. Gamers will experience three major competitions that will make them feel like they're really arrived on the world's premiere racing stage, competing in front of thousands of fans in dramatic and spectacular stadium events."

The X Games events will be headlined by off-road racing's most famous and respected athletes including the multi medal-winning Subaru Rally Team USA driver Ken Block, Dave Mirra, Tanner Faust and Travis Pastrana. X Games 14 Rally Car Racing gold medalist, Pastrana competed with the late Colin McRae at X Games 12 (2006) before going on to feature in and lend his voice to the original DiRT game, published in 2007.

Each X Games event will consist of two knockout rounds (quarters and semis) rounded off with a dramatic final held at spectacular locations including London (X Games Europe), Tokyo (X Games Asia) and Los Angeles (X Games America). The X Games America competition is identified from the very start of the game as the pinnacle event in DiRT 2's racing world and the ultimate test for any off-road racer.

DiRT 2 will be shipping on September 8th in North America. The game will be published for the Xbox 360 video game and entertainment system from Microsoft, PLAYSTATION 3 computer entertainment system, Wii, Nintendo DS and PSP (PlayStation Portable) system with a Games For Windows LIVE edition, supporting DirectX 11, to follow.

Posted by black e media at 9:07 AM Links to this post

After grabbing up a bunch of Vegas To Reno sponsors, he bailed on the effort at the last minute. Then he shows up in Vegas!

He admitted, "I co-dogged it with Old Green and the Rumble Goats. Had the time of our lives. Can't wait to do it again. Thanks for askin', man. It's good to know you guys are keeping track of us scouts and our project. You have no idea how good it feels to know people are interested in what we're doing. Especially people in the desert racing community."

Harrell used the internet to scam his victims.

About the rip-off artist Steven Harrell, he's out of Springfield, Mass. He's the leader of Boy Scout Venture Crew 35 which is (WAS) currently building a 7300/stock mini truck to race in Vegas to Reno and the Baja 1000. For those curious about all that technical stuff, it's a 1998 Ranger extended cab with the 4.0 V6 motor. He said, "We're running on BFG Baja T/A's mounted on ATX Series Mojave rims, that was a sponsor plug, by the way."

He also mentioned publicly, "We're building our cage right now and hope to have the truck pretty much done before it snows."

He pulled out at the last minute, then co-drove some other teams ride in the race. Slimey!

Mr. Harrell, how much money did you raise from selling bogus race t-shirts?

Gotta have some gamblin' money, right!

NASA’s space shuttle Discovery Commander Rick (C.J.) Sturckow is set to lead the six man, one woman crew in to space in the early hours Thursday morning, after being post-poned from their Wednesday early morning lift-off.

Rick is a veteran astronaut on his fourth mission in to space. Interestingly, he is a former off-road racer and pit crew member, learning the ins and outs of the sport in Baja California while a teenager. Rick and his crew are scheduled for a 13-day mission to the International Space Station and back, including 3 space walks and transferring new equipment and supplies to the crew on the ISS.

Posted by black e media at 5:51 PM Links to this post

CLICK HERE FOR VIDEO CHOPPER DOWN AT VEGAS TO RENO

When first reported by Off-Road1.com, the racing Nunley family said, "oh everything is ok, no injuries". Decide for yourself.


The helicopter carrying Nunley, the pilot and an emergency medical technician was acting as an "escort" aircraft during an off-road race involving Nunley's husband, Craig Nunley. All three occupants were hospitalized at Las Vegas University Medical Center, where their prognosis is said to be good.

"Michelle is doing great. She is doing better than anybody expected," Craig Nunley said Sunday. "Fortunately, somebody was looking out for them. They're all OK. We're lucky, very blessed."

Nunley suffered injuries to two vertebrae as well as a broken thumb and toe, her husband said. She does have feeling in her legs and toes, he said.

The vertebrae will heal on their own, Craig Nunley said, though Michelle Nunley will be fitted for a back brace.

Michelle Nunley planned to take a stroll at the hospital Sunday evening, her husband said.

The helicopter pilot, a friend of Craig Nunley, suffered a broken leg. The EMT injured three vertebrae and suffered a lacerated liver.

"They had no major injuries," Craig Nunley said. "It's unbelievable."

Craig Nunley said plans called for his wife to ride with him on Saturday.

The helicopter crashed for unknown reasons in a ravine 25 miles west of Tonopah, Nev., Gregor said.

The helicopter was badly damaged.

Craig Nunley said the craft lost power before the crash, bouncing once and coming to rest among rocks.

The crash happened just 45 minutes after Michelle Nunley had boarded the helicopter, he said.

The FAA and the National Transportation Safety Board are investigating, Gregor said.

News of the crash spread quickly, with Tulare Union students posting messages on their Twitter pages. Craig Nunley said he has received several phone calls from community members inquiring about the crash and expressing good wishes.

"To be honest, the response doesn't surprise me," he said. "Everybody loves Michelle. I could see how people would call and say they're worried."

Baja Racing News.com
Posted by black e media at 11:06 AM Links to this post