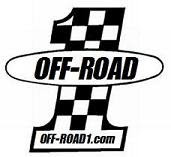 Off-Road1.com Second In A Series
The Cutting Edge Of Off-Road MILITARY


The First Public Showing of the Marines ITV was in San Diego in 2009 and Off-Road1.com was there.

Off-Road 1.com was privy with the Marines in 2009 to view and drive this amazing vehicle. This hardware is operational and available to Marine Special Forces. Details LOADING NOW>>> 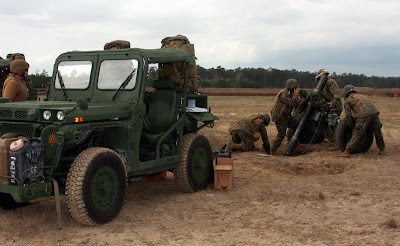 Back in 2007 we reported, The Marines spent many years looking for a vehicle for troops relying on the Osprey V-22 to get them to their destination. The only vehicle that fit was a WWII era M-151 Jeep. The Marine program was ultimately called the ITV program for Internally Transportable Vehicle.American Growler, Inc. got the contract

and delivered prototypes of a vehicle that looks like a cross between a World War II Jeep and a dune buggy, early last Spring. It has little, if any armor. It appears that the proposed buy has been trimmed from 2,700 vehicles to 496 (or perhaps a hundred or so more). USA Today reported the the vehicles would cost $100,000 each (about the same as a Humvee) in 2005, and claimed strong links to the legacy M-151, a claim the company that makes them is sensitive to and denies. At any rate, while the Growler certainly beats walking, it is the most feeble military vehicle designed to carry U.S. military personnel in hazardous areas in procurement today, and it illustrates the irony of the Osprey. The aircraft costs $85 million to buy, but the $100,000 vehicle and small contingent of Marines (two squads of Marines traveling by foot, or fewer with an ITV) that make up the spear tip it delivers in each sortie, is modest. 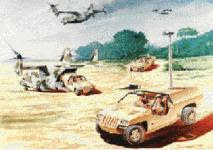 The Internally Transportable Vehicle (ITV) will provide a range of V-22 internally transportable vehicles to fill light strike and utility roles in support of the STOM. The Internally Transportable Vehicle (ITV), also being developed in conjunction with USSOCOM, will replace our current Interim Fast Attack Vehicles (IFAVs), providing critical ground mobility to vertically lifted elements of the MAGTF. Marine Corps small units, raid forces, and ground reconnaissance teams have long recognized the need for rapid, extended range, deep maneuver in ground mobility assets coupled with remote firepower that will allow secure observation, movement and violence of action in the objective area. As the battlefield expands and the Navy/Marine Corps team operates more extensively in the littoral environment, these mobility assets will require vertical transport to the objective areas. This will necessitate smaller, lighter, and more capable vehicles that must be internally transportable in the MV-22 to support Operational Maneuver From the Sea (OMFTS).

Here's the more 'survivability' off-road military, used on the border with Mexico
Here's more details on the OSHKOSH Off-Road Vehicle

An HTTV Entered and raced in the Best In The Desert (UPDATED From August 25, 2009 Story) Boeing and its partner MillenWorks entered and raced in the 1,000-mile off-road race through the Nevada Desert last week to demonstrate a new tactical military vehicle designed for US special operations forces.
The vehicle is a version of the Helicopter Transportable Tactical Vehicle (HTTV), which MillenWorks designed for military reconnaissance and utility missions in extreme conditions and rough terrain.
The HTTV entered and raced in a timed exhibition category in the ‘Vegas to Reno: The Long Way’ race, touted as the longest off-road race in the US.
The Vegas To Reno race, is a Best In The Desert American Desert Off-Road Series of races. The vehicle will be driven by MillenWorks founder and CEO Rod Millen and his son Ryan over the same course as other off-road competitors.

Some material Courtesy of Global Security.org
Posted by black e media at 8:08 AM Links to this post 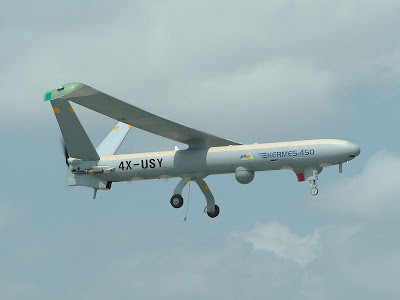 ENSENADA BC January 16, 2010 (AFN) .- During the past two months, an aircraft over-flying the clear skies at night, has drawn attention since it was not identified as owned by any commercial airline and was not known, until now, it is officially with the state of Baja California authorities.

Border News Agency of Tijuana (AFN), was finally able to capture pictures of the aircraft, in full flight when "lifted" in the air, to make aerial surveys, on Thursday afternoon.

It is driven by a propeller and engine side reads: "Mexican Air Force".

Those who state that they have seen the aircraft, about three feet long, a distance of at least ten meters from the tip of one wing to another and it has no windows.

When observed flying in the vicinity of the Military Air Base No. 3, at Ensenada, Baja California Mexico. The loud noise it generates when making journeys at night, is what caught the attention, during clear nights, which was reported to AFN.

It is dark gray and is equipped with lights, both at each end of the wing and the tip, where it exhibits a beacon that emits a strong white light. Reportedly, this is located at a warehouse, in Ensenada, of Israeli origin, equipped with powerful technology and today, is being used to detect drug crops and other drug hazards, in Baja California, Mexico.

Posted by black e media at 6:01 AM Links to this post