Congratulations to Eric and Ryan Thomas for the overall today! KING OF THE DESERT 2010 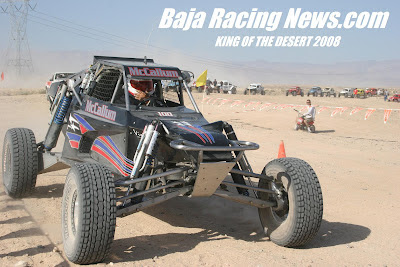 KING OF THE DESERT 250 NEWS

UPDATED!
CLICK HERE FOR TODAYS RACE RESULTS
CLICK HERE
FOR ENTRY LIST
CLICK HERE FOR THE COURSE MAP
The King of the Desert Drawing Party was hosted by Buggy Works located at 11423 Woodside Ave. in Santee.

Thank you to Buggy Works for hosting this event! "MDR would like to THANK ALL OF THE COMPANIES that have donated products for this event. Here is a list of them with more to be added.

The following is the prelim. course information for the KING OF THE DESERT RACE.

Course is marked up to Evan Hewes on the east. It runs next to the road all the way to the plant , down pole line to south tressel and to pit row. Will be back out to finish the final markings and set the checkpoints, visuals. etc. Map will be up sometime today. Also, updates to the entry list will be up today. Course is approx. 35 miles in length. It will utilize both the east and west sides of Plaster City.

Start/Finish will be located on the west side of Plaster City along with Pit Row.

To answer the next question, IT ONLY IS USING APPROX. 2.5 MILES OF GYPSUM ROAD AND THE COUPLE OF MILES IS TOWARDS THE TOP, THE EASY SECTION. 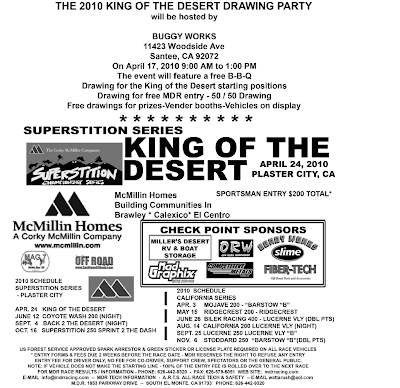 CLICK HERE FOR LAST YEARS King Of The Desert 250!
Posted by black e media at 3:30 PM Links to this post

Posted by black e media at 8:19 AM Links to this post

"Baja Operations" Airs Tonight at 4:30 PM Across the Nation! 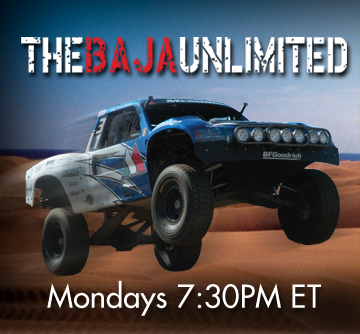 With extensive, never before seen footage, The Baja Unlimited will delve deeper into the history and allure of Baja Racing than ever before. The first show, airing tonight is titled, "Epic Baja".

The series will give viewers a unique, behind the scenes look at the races, fans, support staff and athletes that come together from all walks of life to be part of the Baja Racing adventure.

The Baja Unlimited will air every Monday on the Outdoor Channel and will air original episodes for the next 12 weeks consecutively.

Unpredictable and Unexpected Moments
If asked to describe what racing the Baja is all about, virtually all veteran racers offer the same ominous warning: “expect the unexpected”. Unforgiving terrain, mechanical issues, or booby traps set by over-zealous fans are par for the course. This episode will highlight the action to reveal the wild and unexpected moments that have come to define Baja as a race where anything can happen. Here we’ll see the heartbreaks of mechanical failures as well as the dangers that the treacherous course can present. Sometimes these situations result in a close call like the truck that ended up in the ocean upside down, other times they can mean an early end to the day, if not worse. It’s all the chaos that makes it a Baja experience and through never before seen footage this all comes to life to demonstrate how epic Baja truly is.

Preparation is a huge factor when racing in Baja. With so many unknowns, racers do everything they can to learn the course to the best of their abilities prior to the race. Race teams descend on the Baja Peninsula with GPS, support trucks and all types of tools to try to decipher the fastest route on the course. Though many teams do this, there are various ways to proceed and some teams bring their own brand of chaos to the preparatory run in the desert like the Desert Assassins led by Cameron Steele. Others, like the Herbst team, have their owns methods. The differences set these teams apart in pre-running as well as in the field of Baja racers.

Many, who are less familiar with Baja racing, focus on the SCORE-Trophy Truck and the pro motorcycle classes. In fact there are 26 pro and six sportsman classes that race over this vast terrain. Some classes are those of UTVs, ATVS and cars known as one of the original machines for all Baja racing- the Volkswagen Bug. This episode will focus on the racers inside these other classes and what motivates them. Many of the racers who drive the infamous SCORE-Trophy Truck division started out in various other classes and tin this episode they discuss how they climbed the ranks and what racing those classes taught them about Baja.

4.In the Pits of Baja

No team can race Baja without a support system. Some teams have more resources than others, but everyone has a loyal group of people ready to help them throughout the race at the pit stops. Some pit s are team run and others are race sponsored but all are there to make sure every racer has a shot at finishing the race. Incredibly , the people in the pits (many of whom have the skills to fix even the most serious automotive problems )are more often than not volunteers. The devotion the pit crews demonstrate waiting in the middle of the desert from early morning until the next day to help a racer with fuel or food or whatever they need is incomparable. Every racer or pit-worker has a story and they all add to the Baja experience.

SCORE-International has set the bar for creating the toughest and most organized off-road desert races and for over three decades SCORE President Sal Fish has managed this epic franchise. The people that work at each of these races are as dedicated as any of the racers and as enthusiastic as the most ardent fan. Their various roles include creating and overseeing the course, communicating emergency procedures, rescuing countless racers and spectators and so much more. Each and every person SCORE-International enlists has a duty that helps make these races so incredible. It’s not like a race in the US, the rules in Baja are different and everyone needs to be ready for anything. There’s the communication, which is run by the Weatherman, one of the most intriguing Baja characters. Add in rescue helicopter operations patrols , ground vehicles executing life-saving endeavors and countless others all of which add up to a seamless and exciting race!

Every race team has a home base where they build, prep and re-build a race machine. For some it is a modern facility full of the latest advances in mechanical tools. For others it is whatever space is available in their home garage. Either way, both camps are up against a stiff challenge; build a race vehicle that will withstand all Baja throws at it. During a visit to a wide array of race garages, the viewer will learn about what goes into each race. Mechanics will discuss the trials of preparing for a race and what it means to be part of this critical home team. This is contrasted with the solo effort of a regular Joe who does his own work and has nothing and no one to answer to.

With a backdrop as epic as Baja, there are bound to be some amazing performances during the races. This show will highlight the dramatic finishes, and some of the closest racing in all of motorsports. Also a part of the story are consecutive wins by manufacturers and exciting recoveries that stamp a true warrior with victory. The focus extends to those individuals that demonstrate particular commitment such as Travis Pastrana and others that run the race completely solo, or ““Ironman” in Baja terms “and highlights of all female teams that dare to prove that Baja is not just for men. These spectacular performances illustrate just what types of racers come to Baja and the depth of character Baja draws from each and every person who attempts it.

What effectively makes Baja racing so unique are the people that are part of it. The teams themselves are a kaleidoscope of personalities and backgrounds. This episode takes the viewer inside the workings of teams, the leaders and the personalities. For example, executive television producer John Langley is famous for his international hot television series , COPs, but his true love is off-road racing and he fields two teams for every race. Others include 11-time winner Johnny Campbell and his JCR Honda riders and their rivals from Kawasaki. It’s not always those known in motorsports circles that brave Baja, there are celebrities such as Patrick Dempsey and Jesse James, cross -over athletes such as Travis Pastrana and pro snowboarder Tara Dakides and many others. Each and every team is different and it’s these distinctions that give us the colorful field to race Baja!

The SCORE San Felipe 250 is the first race in Mexico of the SCORE Desert Racing Series and because of that this race is viewed with particular excitement. The racers are all geared up and ready to go and the excitement is tangible. The viewer will see the race highlights with a special focus on the bikes and ATV classes. One shouldn’t let the race title fool them the 250 miles are excruciating and take a toll on tall of the athletes. It may not seem long compared to the other races, but there is no shortage of excitement, competition and passion.

The granddaddy of the SCORE International series, the SCORE Baja 1000 provides a thrilling cap to a season of excitement. All the rivalries are in full force after a season of racing. Honda versus Kawasaki provide a battle determined by just minutes with an amazing finish. This is especially exciting as Kawasaki hasn’t raced the Baja 1000 in over a decade and a previous Honda rider now rides for the green team. Another story percolates when SCORE Trophy Truck driver Andy McMillin lines up again after a years away from the sport. His family name is synonymous with Baja racing, but what happens in this race was something no one could have predicted.

Posted by black e media at 10:00 AM Links to this post