The DGAF crew harm Off-Road Racing in the Western States

UPDATED! The DGAF crew really Don't give a F***
Hurt Fast-Aid efforts and Off Road Racing
Some public reaction to our story here:
"Fish, the 'race-blogger', had friends die at the rock pile this weekend and he was as cold as his namesake, when he said on TV today, he's dead and he shouldn't have been so close to the course".
"Its wasn't the racers fault", Jim Holton said. I went to high school with Jim, he's still a HUGE COKEHEAD", Jims response to this expose,
"HAHAHA" Sent from his iPhone, "TCB Entertainment"[Sept 1. email]. Proving his DGAF creds.
"So pat dailey is in charge of $100,000 of funds raised for the 'Victims', and he thinks this whole thing is the fault of the dead". pat is going to give all that money to his racer buddies, he'll steal the money for his racing".
The first reactions from many in the racing community, after the California 200 tragedy, were ugly. A few Blamed the victims and many called for a cover-ups of the facts.
We reported on the 'blamers' & 'cover-ups' as soon as we saw them. We've identified them as the DGAF crew. They really don't "Give a F***". Pat Dailey, Austin Fish Farner and Jim Holthus DGAF. 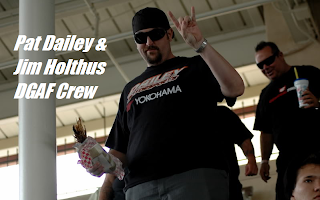 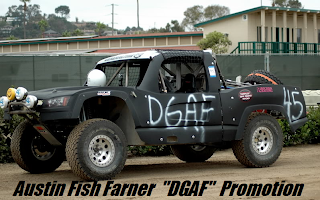 These images are from the Del Mar California State Fair, this summer. They actually ran that truck, in front of families of the general public.
DRC, the desert racing crackheads, TORR and General Tire support this DGAF crew. They should be ashamed.
We have much more material on the "DGAFers" or the DGAF crew, we'll get to later.
But now, we believe, efforts are proceeding to assist the surviving families.
Trust, but verify.
Baja Racing News.com supports any effort to care for those damaged by last weekends tragic events. We also call on an audit of the funds raised, to account for their use.
Why? Because we know about some of the people handling the money. You wouldn't want these people anywhere around anything good.
Donors should demand an immediate and ongoing audit of FAST-AID. These, "DGAFers" are part of what is killing Off-Road Racing.
“We are humbled by the donations including large sums of $50,000 from Mango Racing and $10,000 from 4 Wheel Parts Wholesalers, and appreciate everything all the way down to the $5 donations. Off Road clubs and companies are rallying together to form fundraising events across the country. The off road community is tight knit, and they are certainly rallying and showing their positive support,” stated Jared Tetzlaff, President of FAST-Aid.""
""Jesse James Helps Raise Cash For Crash Victims' Families
SANDRA BULLOCK's shamed ex-husband JESSE JAMES is returning to public life to help raise cash for the families of the victims of a race crash in Lucerne, California.
Eight spectators were killed and another 10 left seriously injured at the weekend (14Aug10) when driver Brett Sloppy lost control of his truck and hurtled into the crowd at the California 200 off-road race meeting.
The tragedy has prompted TV mechanic James to record a public service announcement for Fast-Aid, a charity he co-founded which helps raise cash for the victims of race accidents.
In the PSA, he states, "Please give what you can, even if it's only a few bucks. It all adds up and it all can help make a difference in the lives of some great people.""
Check out this video. Pat Dailey and Dan from DGAF in dresses. Yeah, we can take them seriously. Seriously stupid!
Baja Racing News.com
Posted by black e media at 6:00 AM Links to this post