August 21, 2010:
FROM: Jim/MORE:
"According to the BLM, M.O.R.E. is now going to be the only Car/Truck Race organization allowed to put on Races in the Barstow/Lucerne area. In light of this there will be a merging of M.O.R.E. and MDR racers. Our M.O.R.E. racers practice fairness and good sportsmanship and make every effort to abide by the rules, I greatly appreciate that, I would expect nothing less from any new racer coming on board. In My opinion we are very fortunate to be able to continue the sport we all love, Therefore It is very important that we all pull together to make our organization run safety and efficiently.
I would greatly appreciate everyone cooperation in an effort to keep this sport alive."

August 20, 2010 | 2:04 pm
The U.S. Bureau of Land Management announced Friday that it has approved an off-road vehicle race this weekend in the Mojave Desert, where eight people were killed Aug. 14 during a similar race when a truck lost control and rolled into a crowd of spectators.
The agency approved this weekend's race, hosted by the American Motorcycle Assn., after a "very detailed" review and a "thorough assessment of public safety and crowd control requirements," BLM Director Bob Abbey said in a statement.
The agency will increase the number of BLM agents at the Johnson Valley race and other such events it permits in the future, he said.
In addition to the deaths, 10 people were injured in the Aug. 14 race organized by Mojave Desert Racing Productions, based in South El Monte. Video of the race showed the vehicles speeding along bumpy roads only feet from spectators.
The BLM has suspended all off-road racing events sponsored by Mojave Desert Racing while an investigation into the tragedy at the California 200 off-road race continues.
The BLM issued more than 100 permits for off-road racing this year.
"When we permit any activity on the public lands, our first priority is public and employee safety and health," Abbey said. "We will look at these requests carefully and consider the safety record of the individual or organization requesting a permit."
The bureau manages some 245 million acres of land, mostly in 12 Western states.""

LOS ANGELES—The Bureau of Land Management has suspended future event permits for the promoter of last weekend's off-road race in the California desert where eight spectators were killed by a racing truck.
The federal agency said Thursday the suspension of any MDR Productions permits will remain in effect while an investigation of the accident is under way.
The spectators were killed Saturday night during the California 200 off-road race in the Mojave Desert northeast of Los Angeles. Ten other spectators were injured.
Video of the accident showed spectators gathered along the edge of the narrow dirt course as trucks sped past. One truck went out of control and overturned in the crowd. 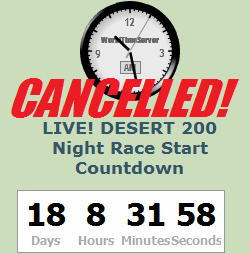 AUGUST 17, 2010:
MDR has cancelled it's previously scheduled September 4, desert off-road race. The BLM reports no permit was issued for the event and no directions from Barstow have been received by the El Centro Office about any future events with MDR.

Considering the 'National Review' underway, the balance of the MDR 2010 racing schedule is questionable. BRN

Doug Wasser of Drive Racing told Baja Racing News.com today:
I was at the El Centro BLM office this afternoon, they had no new information but that is not necessarily a bad thing. Our permit for our September 18th race has been submitted and I feel good about the chances of it being approved. I truly believe that events will be taken on a case by case evaluation for the time being and we will more than likely have additional stipulations imposed. If those stipulations help to make off road racing safer and get us more support from the government then good.
So…to sum the future of Plaster City Racing up in one word…the word would be YES. Until I hear differently we will continue to get ready for our race.""
""I just got off the phone with Patricia at MDR. The race in Plaster City Sept 4, 2010 Return to the desert is for now cancelled. BLM expressed to MDR through a public annoucement they are not issuing any off road permits. Patricia is waiting to actually talk to a BLM offical. She asked me to make this annoucement. I will still have the event this Saturday in place of the drawing party at Bulls Eye Burgers and brew located at 860 Broadway Chula Vista, ca 91910 to raise funds for Fast-Aid to the victims of this terrible incident. Please feel free to still bring down your race cars. There will not be a drawing or a raffle but we will still enjoy the things that are planned and raise money for all those involved. If you want to help or get the media involved please feel free any comments or ideas are welcome.

Baja Racing News.com EXCLUSIVE
Posted by black e media at 3:15 AM Links to this post