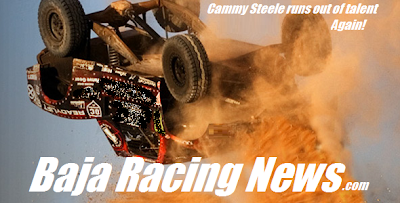 It's Official. On the race sanctioning body website, it says:

But, desert racers, like Cameron Steele, do anything they want to, like pre-run in areas, forbidden to pre-run by the Baja Norte State Government and SCORE.

Now, Cameron is just trying to show-off that he's in Mexico pre-running. No big deal. Except for one thing. In the new era post-California 200, desert racers have been exposed as the most selfish sportsmen in the west. Good for us, the fans!
Why? Because someone is going to screw-up and we'll get to report it and laugh at them, all the way to the bank. Much like Camerons bragging on his Facebook page about defying the race sanctioning bodies rules and agreements with the state government. Who cares!? Big deal he's pre-running an area against the wishes of the organizers and land owners. Right!?
When the reports of injuries, death and damage start coming in from reporters across Baja California on the November Baja 1000, you'll know why it all happens. Racers think they can do anything they want. They'll pay the consequences in the end.
Which will be reported right here, on Baja Racing News LIVE!
AS PROMISED, REPORTED ONLY HERE! MIKE JENKINS IS THIS YEARS WINNER!
CLICK HERE FOR THE UNGODLY STORY
Gary Newsome
Editor
Posted by black e media at 5:14 AM Links to this post