Patrick Dailey gets the weekend ruined by a Glory Hole Accident

Posted by black e media at 10:35 PM Links to this post 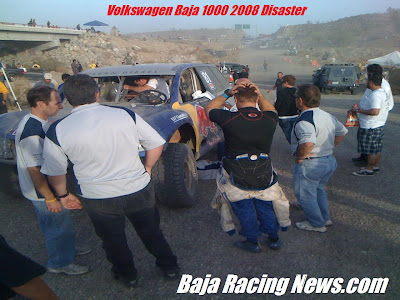 According to a VW Insider:

"Why VW bailed on SCORE??
I know my way a little around in the VAG world and my understanding is that they STILL SEND A SUBSTANTIAL AMOUNT OF MONEY TO SCORE every year to be a major event / series sponsor. In fact as of this moment I do not see any other vehicle brand listed in their sponsor banners and that SCORE website."
Read more »
Posted by black e media at 3:00 PM 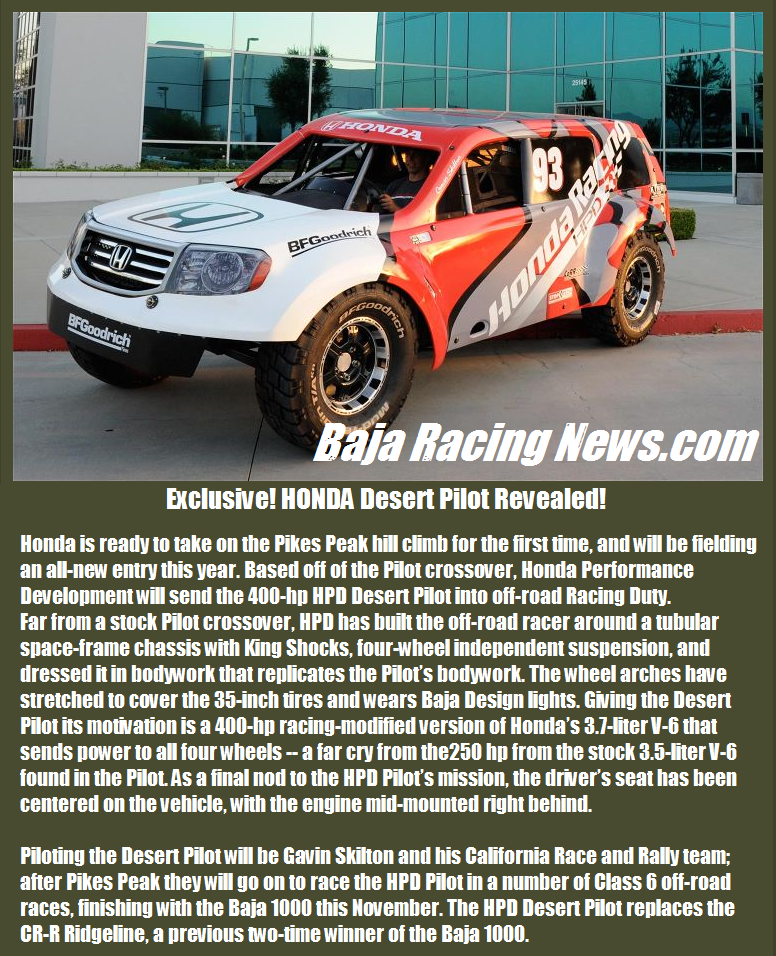 Honda has been dominating Baja on motorcycles for the past decade, but this is a new foray into the desert-racing scene.
Baja Racing News LIVE! watched new motorcycle Records set in the recent Pikes Peak International Hill Climb, but outside of the two-wheeled world was some very interesting news. A one-off HONDA prototype desert racer called the HPD Desert Pilot finished eighth in the Open division with a time of 15:37. Pikes was a shakedown for the machine which will eventually see life as a BAJA 1000 racer.

The #93 machine is a one-seater that uses what looks like Fox Racing Shox and a powertrain co-developed by HPD (Honda Performance Development) and the California Race & Rally team. A mid-engine, production-based Honda V-6 sits in a tube-frame chassis and was driven by Gavin Skilton. Special competition treads, BFGoodrich Mud-Terrain T/A KR tires originally designed for Championship Off Road Racing (CORR), provided traction on the mixed terrain.

Honda also raced a B-Spec Rally Fit, which is a production-based machine entered in the Exhibition category by the Team Honda Research (THR) Rally team. Could this be the beginning of something even bigger? Will we see a DAKAR Rally smackdown with Honda battling the likes of Volkswagen and BMW in the future?

From a recent Honda press release:

“For the remainder of 2011, Skilton and his California Race & Rally team will campaign the HPD Desert Pilot as a Class 6 (unlimited chassis, 6-cylinder engine) entry in a variety of off-road races, culminating with November’s Baja 1000. THR will run the B-Spec Rally Fit in rallycross events for the remainder of the season.”

Honda plans to use the HPD Desert Pilot in multiple desert races. Class 6 is an unlimited chassis vehicle with six-cylinder engine.

Both Honda Performance Development (HPD) entries at the 2011 Pikes Peak International Hillclimb made successful runs Sunday, as the racing division of American Honda Motor Co., Inc., made its first foray in the “Race to the Clouds” with both a one-off HPD Desert Pilot and a production-based B-Spec Rally Fit.

The HPD Desert Pilot features a power train co-developed by the engineers at HPD and the California Race & Rally team. Driven by veteran off-road racer Gavin Skilton, the Pilot completed the 12.42-mile run up the Pikes Peak course in 15 minutes, 37 seconds to finish eighth in the “Open” class.

This marked the racing debut of the Desert Pilot, a single-seat, tube-framed racer powered by a mid-engine, production-based Honda V-6; with replica Honda Pilot bodywork. Developed for off-road racing, the Desert Pilot was entered into the historic hillclimb as a shakedown in preparation for entry in Class 6 Trophy Truck events later this summer.

Entered in the Exhibition category, the HPD Rally Fit started life as a low-cost B-Spec road racer, including a roll cage and competition exhaust, suspension and brake components; with only the suspension raised and the installation of multi-purpose BFGoodrich tires to meet the mix of gravel and paved surfaces found on the hillclimb.

The HPD B-Spec Rally Fit was run at by the Ohio-based Team Honda Research (THR) Rally team. Driven by Honda R&D Ohio engineer James Robinson, the Rally Fit completed its run up the mountain in 15:46.6.

For the remainder of 2011, Skilton and his California Race & Rally team will campaign the HPD Desert Pilot as a Class 6 (unlimited chassis, 6-cylinder engine) entry in a variety of off-road races, culminating with November’s Baja 1000. THR will run the B-Spec Rally Fit in rallycross events for the remainder of the season.

First run in 1916, the Pikes Peak International Hillclimb starts 9,390 feet above sea level and includes more than 150 turns, as it rises another 4,721 feet over both gravel and paved sections to the summit of the famous mountain. More than 150 competitors take part in multiple classes, including cars, trucks, motorcycles and ATVs.

Honda Performance Development (HPD) is the Honda racing company within North America. Founded in 1993, and located in Santa Clarita, Calif., HPD is the technical operations center for high-performance Honda racing cars and engines. In addition to its grassroots motorsports support programs, HPD offers race engine products from karting to pinnacle. HPD is the single engine supplier to the IndyCar Series and competes in prototype sports-car racing under the HPD banner in the American Le Mans and European Le Mans Series.

Posted by black e media at 8:30 AM Links to this post