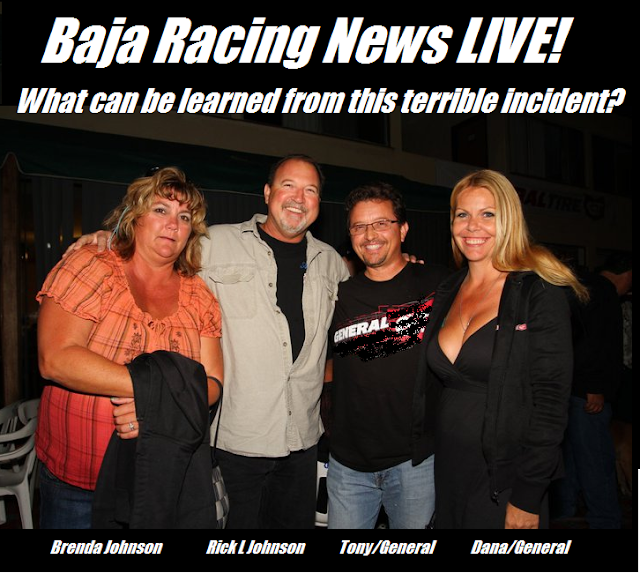 Rick L Johnson, he tried to run away from this crash. Just like all the other punk-ass monied baja racers who almost kill people, then run like bitches back to the USA. Just like the TRAXXAS owner, Jenkins, during the last Baja 1000 who almost killed two American missionaries in Mexico.

We gave Johnson weeks to answer the relative questions. The reason Johnson didn't answer our questions is because HE IS at least partially responsible for the incident. Here's why. 1. He was driving the vehicle that the Federales claim was partly responsible for the crash. That includes a myriad of responsibilities, not the least of which was making sure all the occupants of his vehicle were wearing seat belts. And his failure to stop, to NOT collide into the other vehicle. He didn't stop, partly because he was driving in excess of a safe speed/ velocity.

Like it or not, a safe speed is one that a driver can fully control his vehicle from collision or any upset.

Scott Steinberger admits other victims were forgotten! On a recent public forum, Scott son of Bob, admitted the knowledge of the FAILURE to fully take care of ALL the known injured in this race. SCORE FAIL

The insurance problem. There was an insurance problem. Johnson himself admitted such, when he claimed, "General Tire's Dana, had to use the umbrella policy to bail out Johnson and get his wife (PAID) medical coverage and/or medical evacuation out of Mexico to San Diego.

Our EXCLUSIVE Coverage of this story will continue here///

UPDATE! Seatbelt?, Insurance?
Last Night Rick L Johnson tried to spin his way out of the facts! And we learned, they were filming their race car at the same time! What Really Happened To Rick L. Johnsons Wife in Baja Mexico?...wearing no seat belt and no verification of insurance coverage after an accident, with her husband, Rick L Johnson at the wheel. 'General' company had to step in and provide insurance to get the life-flight to San Diego.


Does Rick L Johnson realize this IS NOT what SCORE wants, because the exposure of the real risks IS NOT "promotive" of desert off-road racing in Mexico?

"Rick tells us all about the near fatal accident that included Him & His Wife Brenda in a head on collision with another vehicle at this last Baja 5oo, He'll update us on how she's doing on her long road to recovery & share with us some very important information & do's & don'ts & things to take precaution when traveling in Baja from the perspective of a guy who's raced Baja, Lived there, Ran a business there for several years & now ""had this horrible accident happen to him"" and ""has found out First Hand ALOT of things to beware of""..."


El Vigia Newespaper: "Preliminary reports indicate that the crash occurred after the driver of a pickup truck Ford F150 Lobo invaded the opposite lane of the road and was just then when compact car hit a Toyota Camry." Racer David Caspino chimes in:
"Being a paramedic since 1982, I know that Score is top notch when it comes to extrication, prehospital emergency care and transport."""
Name

Welcome to the Desert Off-Road Racing community response to this reporting: 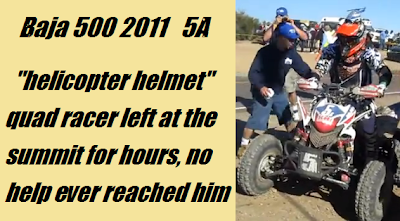 By: Gary Newsome.
It's a desert off-road race in Mexico! So, if you're a racer and get injured and no-one comes for you...guess what the racers say is the rule. "You're screwed."

Even VIP Brenda Johnson was held against her will in Ensenada, for two hours, waiting for insurance papers!

At the recent Baja 500 held in Ensenada, Baja, Mexico, another race generated medical emergency failed for at least one young quad racer, when his repeated calls for medical help fell on deaf ears and were forgotten. BajaRacingNews.com has the full story.

Read more »
Posted by black e media at 12:00 AM No comments: Links to this post