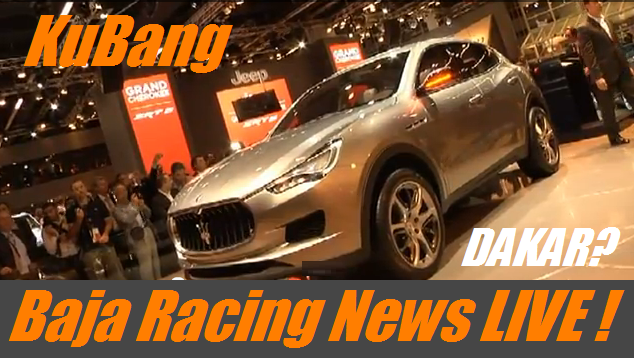 What Will Jeep and Robby Gordon Bring To DAKAR?
SPEED Energy athlete Robby Gordon navigated this modified 2012 Jeep Grand Cherokee SRT 8, in the Bullrun USA Rallyway cross country this past summer from July 9th through the 15th, Vegas to Miami.
In prior statements Robby Gordon declared that the Hummer look-a-like (and also Hummer sponsored) vehicle will retire and there are new developments for the 2012 Dakar Rally. Most likely Gordon Motorsports will “re-skin” the vehicle adapting to the next vehicle sponsor. With Gordon attached to Chrysler in Nascar a vehicle out of the FIAT/Chrysler/Jeep stable, is anticipated.
Maserati SUV to be built in Detroit unveiled. A new Maserati vehicle in the sport luxury SUV segment was presented at the 2011 Frankfurt Motor Show, in September. Maserati says it's a natural progression for its product range. Fiat’s Maserati Kubang, the SUV that Chrylser-owner Fiat plans to “import from Detroit.” The Porsche-Cayenne fighter is to be built alongside Jeep Grand Cherokees and Dodge Durangos at Chrysler’s Jefferson North assembly plant in Detroit. Fiat and Chrysler CEO Sergio Marchionne said last December that a Maserati SUV based on the same platform, but with a “fundamentally Ferrari-based” powertrain, will be made in Detroit in 2012. Marchionne wants to expand Fiat’s Maserati and Alfa Romeo brands by drawing on Fiat and Chrysler’s combined size to boost profit.
The Jeep Mazdaerati?
The highly-anticipated Maserati Kubang concept has been unveiled at the Frankfurt Motor Show.
Designed in-house, the Jeep Grand Cherokee-based model has a prominent grille, front fender vents and LED headlights. Further back, a sloping roofline leads to a uniquely styled tailgate which will undoubtedly cause visceral reactions.
The company declined to release specifications, but said the production model will be "100% Maserati" with a next-generation engine produced by Ferrari. It will be paired to an eight-speed automatic transmission which promises to deliver an engaging driving experience. Additionally, the suspension, brakes and steering system will be unique to the luxurious sport crossover.
While the original Kubang was a Giorgetto Giugiaro design, the update was done by Maserati’s in-house designer Lorenzo Ramaciotti. Other than the exterior and the well-known reliance on the Jeep Grand Cherokee/Dodge Durango platform, Maserati would only say the Kubang will have an unspecified Maranello-built engine backed by an 8-speed transmission.
Will FIAT/Jeep let Robby Gordon drive their new monster in DAKAR? After rolling his race truck twice at the recent BAJA 1000 in November, Gordon hasn't been ON his game recently.
The platform on which the Grand Cherokee and Durango SUV are built has some links to the new Mercedes-Benz M-Class, which was started as a joint program during the DaimlerChrysler era. Jefferson North currently employs 2,685 hourly and 145 salaried workers on two shifts. Both the Grand Cherokee and Durango are selling very well.
The Maserati project would broaden the integration of Chrysler and Fiat, which owns 53.5% of the U.S. automaker.
Posted by black e media at 5:03 AM No comments: Links to this post