CLICK HERE FOR THE STORY OF SIX YEARS OF RACING REPORTS!
Posted by black e media at 7:00 AM No comments: Links to this post

Racing in Baja Mexico-Survival of the Fittest

Americas Most Wanted Blew The Lid Off The Covered Up Story
WHAT'S REALLY HAPPENING! 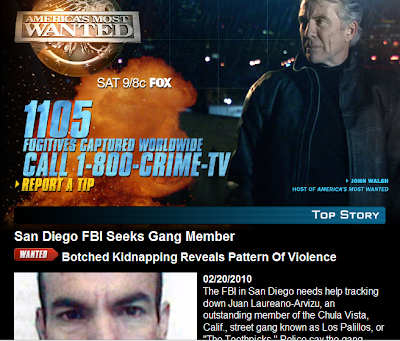 
CLICK HERE FOR AN UPDATE ON THE SITUATION ON THE GROUND

Baja Safari Mexico Club was the only responsible group protecting its members and notifying the public, in the middle of the crime spree. While the murders, kidnapping and police officer murder attempts were happening.

Nine (9) murders, 2 victims boiled in acid and one shot up Chula Vista police officer, currently tied to this crime spree. This from the District Attorney Press Release:

Jesse James, Mr. Hollywood Starlet, Bike Builder, TV Monster Garage star and Baja racer, puts it best: "I fully understand Mexico is Really Really scary for some of you....I look at the border as a big filter to keep out the pussys!....If this offends you??.....I'm sorry but i totally meant it!".

'BajaTed' finally nails the point, "The ego maniacs (myself included) that race in Baja" want to race Off-Road in Baja Mexico".
Racing in Baja is everything you've heard. And much, much, more than most haven't heard.
Baja Racing is the most notorious and dangerous racing in the World!


“He's (Mexican kidnappers are)from a culture where you kill people and put 'em in the desert and nobody ever knows - There's a lot of Iribes in Mexico willing to kidnap Americans for money and kill them if necessary,” said FBI Agent Len Davey


Maybe the reality of the situation is sinking in. 'Rhiannon-La Dulce Diabla' a well-known PCI, SCORE sponsor, a race radio company employee-The Sweet Devil as she puts it, said today: "I've been seeing a lot on the news about the border security warnings? With the news of the shoot out Friday I wish there was some bridge OVER Tijuana so we could get down South safely.I know most of the big $$ guys take their private planes down, but with all the kidnapping stories, I would be scared to have a big last night name right now. The TV coverage is insane on this stuff, has me pretty freaked to be honest. I feel a lot better about Ensenada, but 20 times worse about getting down there."

The racing is awesome, the people of Baja, the food, the land. Incredible.

What you haven't heard. Obviously, what you haven't experienced. The corruption is much worse. The deserts eat the uninitiated instantly. Murder, kidnappings, the rest. The uncontrolled crime is the LEAST of your worries. When you end up in a Baja Mexico jail, you answer to the guy with the keys, not the criminals, not the corrupt officials. The jailsmen. You'll need money, cash. To get out. And that's for not breaking any rules, its for being an American in Mexico. 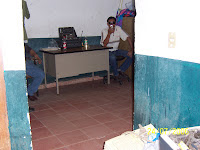 Make sure your family has a spare $35,000 to get you out in serious situations. Just in case. That's if you are lucky enough to be connected. Without the connections, some international travelers caught in the Mexico trap can be held for YEARS without even a hearing. If you are a nobody and alone, you can end up a corpse in Mex. Google 'Kraft accident, Baja Mexico' or CLICK HERE 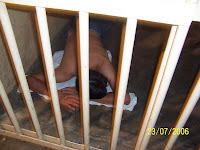 The crime business has been so good in Baja Mexico that the criminals started a franchise, kidnapping-torturing-extorting in the USA! The shocking TRUTH - They've moved to your neighborhood. Even federal, state and local law enforcement in the United States has been warned of Mexican Baja Crime Wave and potential kidnappings IN THE UNITED STATES! Not just Mexico 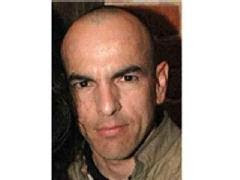 Look closely- The face of a Dangerous Mexican kidnapper loose in the United States.

And you want to race in Baja? I have lived in Ensenada for 35 years. Raced here for over 40 years. I race in the local Baja races, its fantastic. Crazy? Ill-advised? My friends and family have told me these things ever since I was racing with Balboa Racing back when. The real risks had to do with the RACING. That was then. This is now. 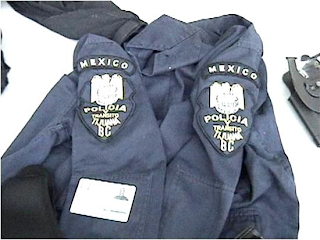 Who is really wearing the colors of authority here?

There's plenty of FEAR around for the Tijuana Baja Californianos without the racing. The attitudes of the ignorant are now reaching critical mass. Click Here. Yea, I'm rich or stupid, I can do anything I want - I have protection from evil with the 'tourism department' while I'm racing! Others wear big fat gold rings hoping for the protection of SAINT DEATH, as you race Off-Road in Baja Mexico!

Unless of course, you're 'Mr. Hollywood Starlet', bike builder (who hasn't even run in enough Baja races to qualify him as a newbie), Jesse James, just don't get picked up by any of the Baja California State Police, remember this warning sign? CLICK HERE They can f-with you til you're dead. Under their laws and under their racist-nationalist attitudes.

Don't drive at night, unless you are willing to risk everything. Including your LIFE. Google 'Hall family, mexico crime' or CLICK HERE

And just in case you believe your'e safe and THEY don't know that you are racing in Mexico, they are racing along side you! A Class 1 racer at the San Felipe SCORE 250 was yanked out of his Class 1 rig as they were lining up for the start. Who is he? A Class 1 hitman for one of Mexico's largest drug cartels! 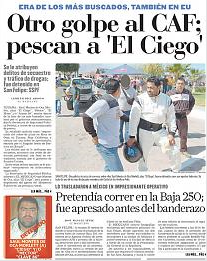 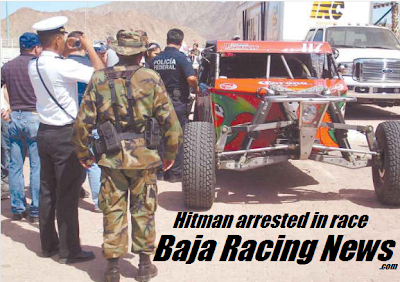 The racer yanked out of his Class 1 at the SCORE International San Felipe 250 event, is a criminal of historic dimensions. Who checks these racers-teams out really? NO ONE. They just want the entry fees, the money-dinero-$$$. Now they're taking money from the tourism authority of Mexico to lure YOU - DOWN.

This person was one of the most NOTORIOUS KILLERS IN MEXICO!

Before starting the race, law enforcement authorities from the local cops to the Mexican Navy swooped in and apprehended the 'Blind Man'. Saul Montes de Oca Morlett. Race vehicle number 117. A local race team, with his helmet on and ready to race, the officials guns were shoved into his face and he was ordered out of the race rig. Arrested and flown to Mexico City.

The 'Blind Man' was in charge of a kidnapping and killing cel (group of men) for a major drug trafficking cartel of Baja California Norte. After all the assurances of safety by the authorities, including SCORE, the race sanctioning and promoting body, this killer was racing with all the Americans. Surprised?

Baja Racing News has warned of this situation for YEARS.

The state police have warned you, the State Department of the United States has warned you and now the recent events during these races have exposed the reality of the situation.

What does this all PROVE? Racing in Baja Mexico is "the Most Dangerous and Notorious Racing in the World". And this isn't even talking about the actual RACING!

If you are one of the ego-maniacs that races in desert off-road events here in Baja California Mexico, you have been forewarned! 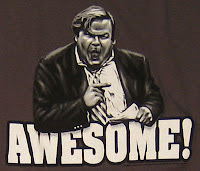 James responded to his 'pussys' statement, "You know I really never cared much about what the Hater's think about me. But one day I hope I do win a BAJA race so they can all line up and Lick My Balls! Keep talking shit and I'll keep getting Faster..."

REPORT H START FROM THE BEGINING

Have the Mrs., your Sandra Bullock people, get ready for a script. The Baja 500 and 1000 will see the green flag soon, here in Ensenada. I say, c'mon down, race. And remember, those who race here know it is SURVIVAL OF THE FITTEST. If you can't take it, don't show up. If you do and get burned, the bulk of Baja racers don't want to hear your cries.

CLICK HERE! Just ask the Hall family, they said they'll never return to Mexico! This is the reality of racing in Baja Mexico!