The Start of Baja Racing Season in the Desert in 2012 Starts Hard. Robbie Pierce called out, "Pierce needs to retire from offroad and short course racing before he seriously hurts someone."

Then, later this afternoon,  Rick L. Johnson and Matt Scaroni, possibly the two fattest d-bags on the West coast, will announce, they're married!


Johnson is going to be in an ownership position with Scaroni!? An epic unified FAIL opportunity! If they haven't failed already!

Original Video- More videos at TinyPic
Pete from earlier in the day..."just heard some guys didn't get paid from the last race or the championship money and now he quit and "gave" it all back to 'the scumbag Scaroni family'.......baloon payment maybe???....like i said, i knew the "sale" deal years ago wasn't real......the 'truth" is difficult for both so figure out how to sift through the BS..." "part of the 2% (claimed to know about the whole story) that $25,000+ is owed to the purse winners from last year???? and that your dad is going to be in charge??? and you have no idea who is going to build the trucks or parts??? and that there is NO PURSE in place for 2012??? there must be a LOT of problems if i only know 2%...
The rumor hit this morning, that the rot-gut tequila purveyors (at an event in San Diego last year, 'real' tequila professionals didn't even list the rot-gut PoonYa brand, because it was too shitty to even taste!) door slingers, will take over the failed series.

And of course, Ramsey El Poodani confirms everything Pete said, without any press release.
Even the fact that the series failed, because the money that was promised, wasn't paid!
Thanks Ramsey El d-bag!
Also new today...
Baja Racing News LIVE! Classified:


"I'm trying to find a very competive team to partner up with for the remaining SCORE races. I would like to find a Class 1, 10, 12 or maybe 6 truck team that needs an experienced Mexico racer who can win races. I can provide financial and pit support which would be negotiable. I am not looking for a team that just wants to finish races but that wants to win and can win. I would be willing to consider BITD but would have to be right set of circumstances. Jim Anderson 775-691-7166"


Robbie Pierce accused of lousy race driving,  yardsales (again) his Trophy Truck and Jimmy Nuckles does the same at Laughlin.


"We have been praying with him for Cody Stuart (Desert Assassins Trophy Truck Co-Driver) He was hurt yesterday at the Laughlin race when the transmission literally blew up, sending shrapnel and hot fluid into the passenger side of the truck. As well as the entire Groves family who were in a massive car crash on the ...101 yesterday and rescued from dangling off the side of a bridge.

Keep the prayers coming for my 'lil buddy Cody after the surgery he went though last night and this morning. It is great to talk to him today, he's such a solid guy. Long road to recovery starting in Vegas but we are all here for him and praying. I have not spoke to my buddy Jason or got an update on his family but I ask that you keep praying for them as they recover in the hospital in Santa Barbara."
The Laughlin Leap was cancelled this year, to the dismay of desert racing fans across the west.


Mastercraft owner, Robbie Pierce, calls out DGAFer Austin 'Fish' Farner after Farner says, "Pierce needs to retire from offroad and short course racing before he seriously hurts someone. Ya I said it. FACT".


Pierce: "Fish, feel free to borrow some man pants and stop by the pit and I'll explain your ignorance to you, you key board coward. Jimmy was nice enough to apologize after the crash for driving through us, unfortunately taking us both out. Class act on his part, it's racing and fortunately we'll all race again."


Farner replied, "See ya at Parker. I'll even buy ya a beer at the bar. Maybe we can discuss suspension seats vs molded too while we're at it".


That brings up the whole assertion that Farner thinks the Mastercraft seats Pierce produces (suspension seats) are shitty. Not safe and shouldn't even be sold in the United States.


DA Cody Stuart injured when the Trophy Truck of Cameron Steele grenaded...He's getting surgery tonight but it might be a series of surgerys. Like 3 or they might do it all tonight. There's shrapnel in his leg. Bone is crushed. The scary part is there are arteries near the injury. They are intact but they make the surgery really tricky.... Also it's transmission metal in his leg so there's worries about infection.


Desert Assassins Jason Groves wife and daughters got seriously hurt in a car accident, off the track. 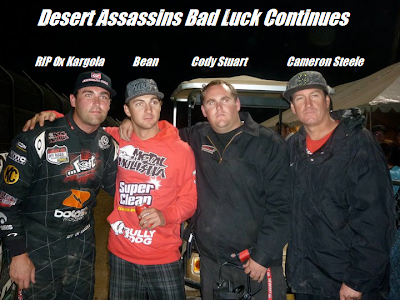 So, who's next to get the Desert Assassins dish of Desert Revenge?

Cody Reports on another Yokohama Tire Fail for the DA Team

The racing classes are divided into groups for five multi-lap races each day. The start/finish line area and main pits will once again be located at the Laughlin Events Park just off of Casino Drive in Laughlin. The day-long second race of the weekend will start Sunday at 7 a.m. The first motorsport event of the year in the United States in Laughlin, 90 miles Southeast of Las Vegas.For the first time in the history of the event, each day of the two-day Laughlin gathering has separate race events for purposes of championship points, prize money and trophies.


Baldwin, who won both the 2006 and 2008 SCORE Trophy Truck season point titles, survived a tight battle for the five laps with fellow Las Vegas Rob MacCachren, finally pulling away on the sixth lap when MacCachren was had to stop to change a flat tire. Baldwin, who was also the fast qualifier for the race and started first Saturday, led physically the entire race although on corrected time he was in a dead heat with MacCachren after three laps and had a 10-second lead after five laps before MacCachren had to stop to change a tire. BFGoodrich is his tire company.

Posted by black e media at 6:00 AM No comments: Links to this post


Dan Novak: ""I was reluctant to talk about anything about what was up but it was pretty much info already out there that same night so it was only a matter of time before it hit the public... I was careful to make sure I pointed out that precautions were made for the next day. Being the only guy in WTAR that was there this weekend i can say Saturday sucked. Ya know when were racing and not doing well and everyone is stressed and sorta sad? this was like that but worse... Spookily quiet etc... we were all kinda afraid to talk at all...When the trophy truck (the racing truck which the transmission exploded seriously injuring the co-driver) came in on the trailer and we surrounded it with a chase truck and people... they had already rinsed the inside before the pulled it in the pits but i still needed to be cleaned... the hole in the tunnle was gnarly... our surrounding kept people back so no pics got taken etc... there was only on dude with a camera around and he never even pointed it. as quickly as practical, the truck got put away in the tent with the walls in place for privacy... the rest of the details I will keep to myself.

I can say, there was a ten inch vertical hole on the pass side of the tunnel right where his (the seriously injured co-driver) left leg sat...... looked like a huge tear in the metal..it was soo gloomy. everyone wondering about cody, what hospital hes going to, the story kept changing and updating...it was impossible to enjoy youself....""


The Desert Assassins have never had the proper safety shielding needed to protect the co-driver in situations like that occurred this weekend.


Lance Clifford the infamous drunk pirate and his butt-buddy Camo are now officially-flunkies. Lance gave up control of the administration of one of the largest off-roading cf's on the web. The sale occurred after the owners of ULTRA or also known as the King of the Hammers event, slammed shut Pirate for gouging, "a gross overcharge" for media services for the new event.


Money. Money ended one of the worst message board gouging operations on the web. Lance and Camo thought there was no other place for event operators to go for off-road racing event media visibility. But, when drunk-drugged ex-real estate agents can surpass a couple of degenerates in pitching and slinging for half-baked hillbilly pukefests, its time to go and they did.


For the past year, SuperLite / Speed Technolgies, BF Goodrich Tires and General Tires have been paying for promotional services that have led to the current crisis in race coverage. The crisis lands itself right into the fight over the rights to the MINT 400 event and the new HDRA series.


Roger Norman, owner of the new HDRA race series, wanted the MINT 400 for his series. But, Mad Media, Rasch and Guise conspired to steal the event away from Norman. Norman now finds himself with a lackluster schedule and a bothersome problem, competing against three entrenched racing sanctioning bodies. Who will Norman choose for media services? His pal SurfRat or his slaveholders, Rasch and Guise?


Are Rasch and Guise paying their business taxes? Seriously, with the off-road community in the gutter and foaming at the mouth this year, no-one is putting up with the hilarious sham their so-called coverage reflects. Everybody knows how much they HATE IT when those mind-numbing ads run during their best chance to shine...and they FAIL every time. What tire do you feel like buying after that shit???>>> Anything BUT General and BF Goodrich! Is Guise still interested in getting his family in the middle of a beat down over the MINT 400 ownership?


After General Tires blew-off BJ Baldwin this year, they now have to address the 'quality issues' assigned to the results of their Hoosier built racing truck tires. Will General continue to laddle out the gravy to the racers or focus on quality consumer truck tires? BF Goodrich also has issues. They can see the writing on the wall, Off-Road Racing promotions sell race tires, not consumer tires. What to do? Draw down promotional expenditures in racing, simple.


The owner of SuperLite / Speed Technologies is saying they are not renewing their work with SurfRat and the owner is going though a divorce, limiting Mr. Harrahs passions for dirt racing this year.


The Mad Rush for the dollars is in full swing and Baja Racing News LIVE! is watching and reporting closely. Ready to cover all the pissing. Do you have details? Send them to bajaracingnews@live.com


Gary Newsome
Editor, Baja Racing News LIVE!
Posted by black e media at 12:01 AM No comments: Links to this post 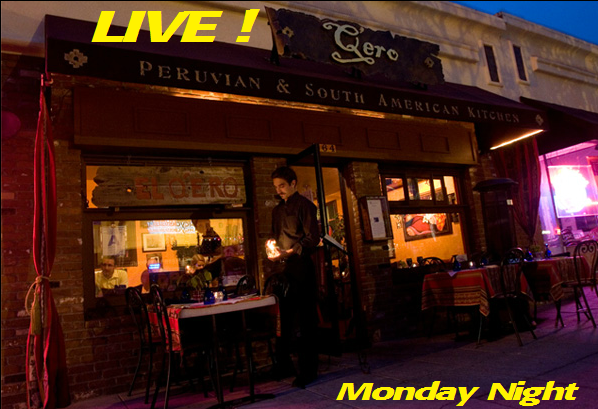 
CLICK HERE FOR THE LIVE DAKAR 2012 EVENTS
Posted by black e media at 7:47 PM No comments: Links to this post