CLICK HERE FOR THE STORY
THE "END" IS NEAR, UNDER CONSTRUCTION 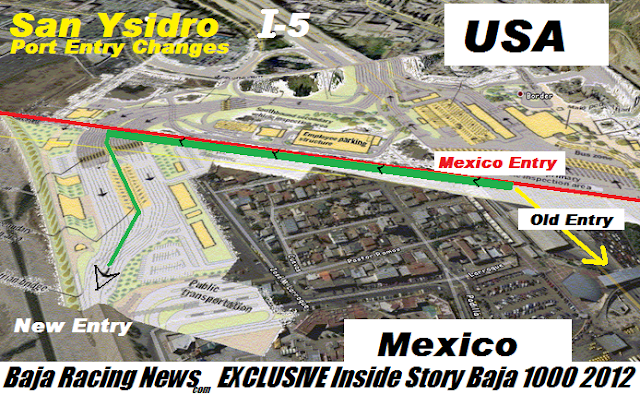 A major bus line that takes tourists to Baja Mexico has changed its operations today, after being in business for over 25 years, because of the impending port of entry changes on the Mexico side!

Entry into Tijuana has already begun to change, with many of the lanes into Mexico going into the new entry lanes starting before the November 1 start date.

The November 1 start date is now being described as a drop-dead operational date, with all the new lanes into Mexico being operational at that time.

The old school drive into Mexico is going away! Significant inspections in the Republic of Mexico, at the new entry facility will bring more revenue-currency discoveries and arms seizures.

Traffic delays going into Mexico, through San Ysidro, over the next two months are being described as 'monumental'.

The Otay Mesa commercial crossing is the best alternative, in the San Diego area.

Original Report: Baja California official says that although current crossing is to close Nov. 1, the government does have a Plan B in case projections on wait times prove to be overly optimistic

Although the number of lanes going into Mexico from the United States is being reduced by one and the lanes will be narrower and drivers will have to negotiate the curve, Mexican planners say they believe that wait times to get into Mexico at rush hour will actually be reduced because the number of lanes will fan out to up to 22 inspection booths once traffic enters the El Chaparral facility. The current Puerta México crossing fans out to only 11 lanes.