Posted by black e media at 2:02 PM No comments: 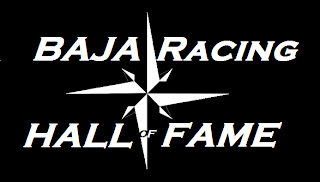 The Editorial Board thanks you, the FANS of Baja Racing, desert off-road racing in Baja, Mexico, for your assistance in this Grand Effort to pay Tribute to your Special People of Baja Racing!

It wasn’t so long ago that a trip to El Mirage, Muroc, Pomona, Bonneville, or a special event night at the Petersen was invariably a reunion of family and friends.  As the 50 Year anniversaries started ticking off HRM, NHRA, Muroc, SCTA, Bonneville, etc. it actually meant more than one thing.  Firstly it meant that the birth of Hot Rodding was something to be acknowledged and celebrated.  Secondly it meant that it’s pioneers, if they survived the era, were also to be acknowledged and celebrated but it also meant they were at least 70+ years old.  The later is an unpleasant reality punctuated recently by the passing of 87 year old Don Francisco, the last of our families true Hot Rod Pioneers.

Francisco, or “Cisco”, as he was known to the HRM staff, was one of the true Southern California Hot Rod Pioneers.  His practical engineering knowledge and undisputed engine building skill positioned Francisco in the middle of high performance vehicle development and advancement.  From a small gas station in Alhambra, Francisco started rebuilding and tuning engines for many fellow Road Runner’s (an early Southern California car club whose members included: Vic Edelbrock Sr., Wally Parks, Bill Burke, Ak Miller and brothers Zeke and Larry, Randy Shinn, Eddie Meyer Jr., Dean Batchelor, and Ray Brown).  Along with regular engine work and other Hot Rodders looking for good reliable engine work, this “side business” started taking precedence over his regular job at the Alhambra Fire Department.

As Francisco’s reputation grew, helped along by the success of the “Burke/Francisco” Belly Tank featured on the cover of fledgling Hot Rod Magazine in August of 1949 and touted as the “Worlds Fastest Hot Rod” at 164.83 mph., opportunities presented themselves. Then HRM editor, Wally Parks talked Don into writing his first article for the magazine, “Know your ignition” and in February of 1950 Don became an HRM staff writer.  Soon he moved up to “Technical Editor” and continued on with Trend Publications (AKA Petersen Publishing now Primedia) until 1965. Besides Hot Rod Magazine, Francisco was a contributing editor at Motor Trend and was technical editor and reader forum “What’s Your Problem?” chief at Car Craft.  Collections of Don’s technical articles were bundled by Trend and reissued in the small format “Spotlite” magazines.  Don’s passions were performance, the dry lakes, Bonneville, and the Indianapolis 500.

His honest, unbiased, and thorough methods of reporting won him many loyal readers but is also rumored to have cost him his job.  Better that then his integrity.

In the early 50’s, Bill Stroppe and Clay Smith called upon Don’s talents as they prepared Lincolns for the Mexican Road Race, a five day border to border race along the newly completed Panamerican Highway.  The Lincolns dominated their class and gained the nickname “Road Race Lincoln”.  Don also participated successfully in the Mobil Economy Runs of the late 50’s and early 60’s.  The Mobil Economy Run was a competition to maximize fuel economy over a cross country route that was changed every year. The event lasted several days and covered more than one thousand miles, sometimes crossing the entire United States. These were a very popular and important event for competitors and manufacturers (winning was key to big advertising  campaigns). In the mid 60’s, he was independently contracted by Pontiac to run their factory team, preparing cars and choosing drivers for the Economy Run. A small side note, Don hired land speed record holder Art Arfons (jet powered Green Monster fame) to feather foot one of the Pontiacs in 1965.

In 1963 and 1964, Don worked again with Bill Stoppe preparing and testing a team of Mercury Comets to be entered in the 1964 East Africa Safari, “The Worlds Toughest Race”. Don made two trips to Africa as team manager reporting directly to Fran Hernandez, the Lincoln Mercury Manager of Performance and Evaluation.  Don’s responsibilities were all encompassing.  They included: managing a $100,000 budget, vehicle production, ground and air transportation of vehicles and personnel, hiring and paying drivers, lodging, customs, procuring vehicle storage and workshop space in Kenya, and actual road testing of vehicles and tires.  A practical list of vehicle improvements and additional equipment needed for the effort was submitted by Francisco to Hernandez and Stroppe.  When an upper management decision was made concerning the choice of shock absorbers, contrary to Don’s recommendations, Don left the project before the March race. During the race, all Comets encountered broken rear shock mounts resulting in either lost time while repairs were made or actual retirement.

In the Late 50’s Don started “Don Francisco Publishing Company”.  He wrote, published, and sold several books on high performance.  Later, he led Ed Pearlman and founded The National Off-Road Racing Association establishing the inaugural “Mexican 1000” in 1967.  Being a skilled airplane pilot, Don made many flights into Mexico, charting a viable racecourse and calculating needed service stop locations.  They established the first set of rules and classes for the sport of off road racing and they are both acknowledged by their induction into the BAJA Racing Hall of Fame.

Control of the 'race event' was wrestled away from NORRA by Mickey Thompson and SCORE but Don and Ed continued in business together operating the Baja 500 Off Road Mart in Pasadena until the mid 80’s.

Don passed away on January 29th, 2005. On Saturday February 26th, Don Francisco’s life was celebrated at a memorial service held at the Wally Parks NHRA Motorsports Museum in Pomona.  Over 150 people gathered to salute Don and share their thoughts and stories.  Son Gene Francisco, Nephews Michael Noval and Denis LaBonge, Friends: Wally Parks, Alex Xydias, Bill Burke, and Jim Travis tried to put into words a lifetime of accomplishments and adventures.  Besides an excellent short compilation video (very funny and possibly soon posted on this web site) and several photos on display, there were trophies from the Mobil Economy Run, the trophy for the 1949 SCTA points winning Burke/Francisco Belly Tank, and his induction plaque to the Dry Lakes Hall of Fame.  Sunny Francisco’s 1957 Thunderbird (the topic of two 1963 HRM articles including swapping the Ford mill for a Pontiac with an early B&M Hydro transmission) and a re-creation of one of the 1964 Safari Comets were displayed at the entrance to the museum. It could not have been a better event.  A very heart felt thanks to all those that contributed to the event especially Wally Parks and the staff at the NHRA Museum.

Don’s knowledge and writings will continue to be his legacy.  Original editions of Hot Rod Magazine, Motor Trend, and Car Craft, books Don personally published: Maximum Performance-Stockers for the Strip or Street, How to Modify Chevy V8 Engines, and the Trend “Spotlite” books: Ignition Systems, Exhaust Systems, Wiring Systems, Carburetion Systems, The Complete Book of Engines, Hot Rodding the Chevy V8, and Hot Rod Engine Swaps are the history books of Hot Rodding, containing his words and suggestions.   Wally Parks recounted traveling across the country with Francisco, once while they were having their gas tank refilled, somewhere in the mid-west, they noticed a magazine open next to an engine being rebuilt in the service bay.  An article by Francisco was this sixteen year olds “how to” guide for the job. They had not realized how far reaching their writings actually were.
From the dust in Baja, the dry lakes of El Mirage or Muroc, Race Tracks from Pomona to Indy, and on the salt at Bonneville, Francisco innovated and shared.

ALL HALL of FAME Developments will be reported here, on BajaRacingNews.com

Posted by black e media at 4:25 PM No comments: