UPDATED! BULLETIN! "Only Second Degree Burns!" SCORE Operations decides the Fatality and Injuries from BAJA 1000 are par for the race. BAJA 1000 totals up at least one death, numerous life-threatening incidents and Life-threatening burns to two, race organizer calls, "Only second-degree burns". 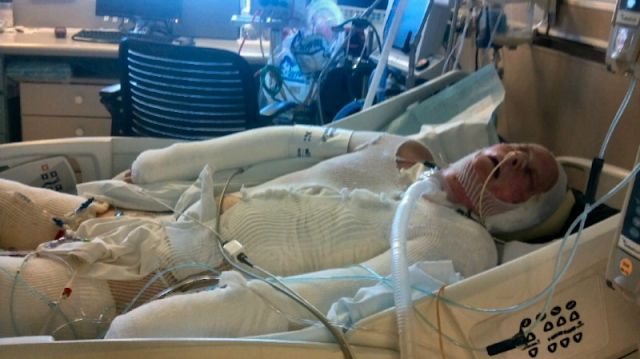 "Dan Cauffiel was severely burned in an accidental fire that erupted during an auto racing pit stop in Baja Mexico in November 2012. Dan loves off-road racing and has helped many race teams over the years always enjoying the camaraderie and friendship found in the desert racing community. However a flash fuel fire erupted while Dan was changing a tire on a race car and he was severely burned on both legs, both arms, his back and his head. Dan is not one to ask for help. However he has had no income since the accident in November 2012 and his pickup was burned to the ground in the fire along with some cash he had for an extended trip to Mexico for Thanksgiving. He has survived a very long hospital stay, several surgeries and significant physical therapy and while he had medical insurance the hospital and doctor bills have far exceeded his coverage. We are truly grateful for whatever assistance you can lend to help Dan recover from these medical and financial losses and to help him meet his goal to attend the Baja 500 race in June of 2014. For Dan, going to this race is a symbol that he will have surmounted the steep road to recovery and he will be on as Dan puts it his “Return Tour”!

Here is the description of Dan’s plight immediately following the accident. He was quickly taken to a hospital in Loreto, BCS Mexico where the doctor did a fantastic job getting Dan stabilized and his burns prepped to maximize the recovery capability. From there Dan was air lifted to the UC San Diego Burn Center where their incredible burn trauma team went to work on Dan. Due to the extent and severity of his burns the decision was made to place Dan into a medically induced coma to help him cope with the pain and to keep him immobilized to optimize potential healing following the surgeries to repair the burns. He remained in this coma from November 20 th through January 21st - over 2 full months.

When Dan was brought out of the coma he still had a long way to go. After being immobilized (or as Dan called it “mummified”) for that long of a period of time the medical staff let Dan know that his elbows and the soft tissue in his arms had calcified (HO – Heterotopic Ossification) effectively locking both his elbows in a 90 degree angle. In fact at that time the doctors said that Dan may not regain the normal use of his elbows and as a result may not be able to even feed himself going forward. Dan took that as a personal challenge to prove the medical staff wrong and with God’s help would channel that energy into his rehab and recovery.

Fast forward to now – April 2013, and after 2 more surgeries to free up the bone calcification in both elbows by the grace of God Dan has nearly normal range of motion in his left elbow and reasonable range of motion in his right and is expecting more freedom of movement as he continues physical therapy. The scarring has been kept to a relative minimum, with the most notable remaining on his left arm and the back of his left leg. Dan jokes that his face looks better now than it did before the accident with no scarring and thanks to the fire a “light peel” to remove the blemishes.

Even given the challenges that Dan has been through he feels that he is a lucky man. God blessed Dan with incredible physicians, nurses and surgeons who have given Dan a second lease on life. Even given the severity of his situation, Dan feels things could have been much worse and in fact believes that God performed many miracles within the accident keeping Dan alive. His positive, enthusiastic and unstoppable attitude has even impressed his San Diego medical staff to the point that they have asked Dan to help counsel and encourage other burn victims to complete their often painful physical therapy sessions. Dan continues to work hard in his rehab sessions. His motivation is “for every minute of pain & therapy he is 1 day closer to getting back to racing”.

Again, we want to say thanks in advance for whatever donation and prayers you can send along to Dan to help him get back on his feet both financially and physically. Please share Dan’s story to help him complete his “return tour” to desert racing. Thanks and may God Bless you and your loved ones.

Photo of Dan in U.C. San Diego Burn Center" (above)


""The Weatherman needs Satellite internet high bandwidth to broadcast live online Come up with the proper equipment so we do not have to rely on the Diablo Observatory internet service to make the Weatherman feed work better online(frustrating to sit at home and not hear what is going on). The Weatherman needs to come up with a high speed large bandwidth satellite internet device to use at remote relay locations to better stream the events online. My Father has a meeting planned with Steve Meyers of IRC to go over options, but this equipment is expensive so I am going to need to figure a way to get sponsors or donations to help offset the costs of this equipment. Your ideas and support are welcome.""

BajaRacingNews.com offers to help sell off Boobs fathers 'Taj Mahal' house in Parker to pay for REAL communications for safety in SCORE.

"What other series can boast the amount of medical assets that SCORE provides? A helocopter with a doctor on board, 17 ambulances and 10 rescue units. Also all the private medical assets known to me"

Reviews to be conducted on all SCORE racing events

BajaRacingNews.com Finds
desperate need for a dedicated
Emergency and Operations Radio and Communications Channel to properly address the needs of racers, chasers and needed race personnel.

From the show Monday Night:


""Hi, I am glad to finally get some information on the Chase 723 accident. The deceased was my cousin Mark. I agree that SCORE was NOT prepared!!!!!""

Hal Andreoli, "race Medical Director" for SCORE, not returning phone requests from recent attempts to fact-find for this investigation. Nominated by SCORE for award, Andreoli the active responder to Emergency Medical actions at the races. But, Hal isn't qualified to apply a band-aid!

Funeral arrangements are pending for an area businessman who was killed in a truck rollover while on vacation 'chasing BAJA 1000' in Mexico.
Mark Eriksson, who was founder, president and chief operating officer of Sauk Rapids-based Talon Innovations Corp., died Nov. 15. He accepted the invitation of a friend from Los Angeles who owns a race team to ride along in a chase vehicle during the Baja 1000, an off-road race on Mexico’s Baja California Peninsula. He was one of three people in a truck loaded with fuel and racing equipment when it rolled on a highway, according to Eriksson’s brother, Chris.
“They were passing a semi on a highway straightaway when their left tires went off the pavement,” Chris Eriksson said. “A woman was driving and she over-corrected and the truck rolled four times and exploded. The woman was medivacced to the hospital and is showing signs of paralysis. There was a 19-year-old (man) in the truck, too, and he got a concussion but was able to walk away.”
Mark Eriksson, 45, who lived in St. Cloud, leaves behind his wife, Karla, and their teenage sons, Trevor and Trent, and a business that employs about 80 people in a 40,000-square-foot facility in Sauk Rapids.

Chris Eriksson said it is a complicated process involving four different funeral homes to transfer his brother’s body home for a funeral, which is expected to be in St. Cloud in early December.

"AMEX" Announces Loreto Burn Incident to be reviewed in 2013! 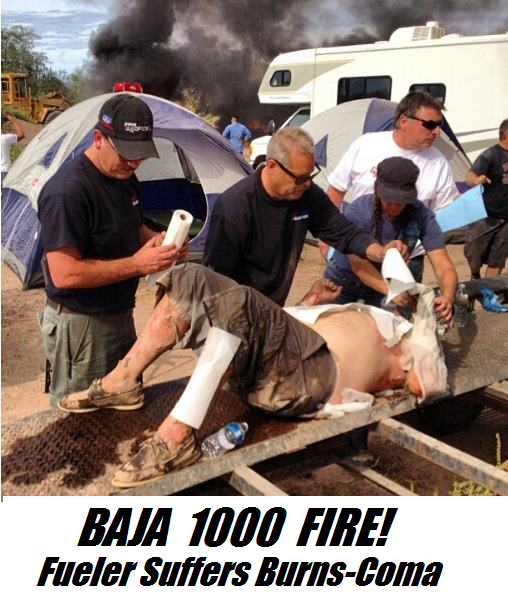 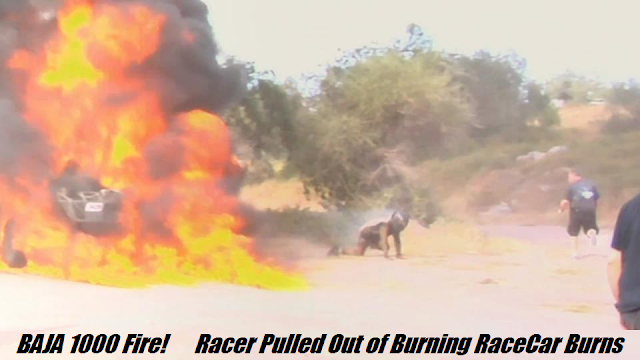 DISTURBING PICTURES FROM THE SCENE, PEOPLE ON FIRE, LOADING NOW 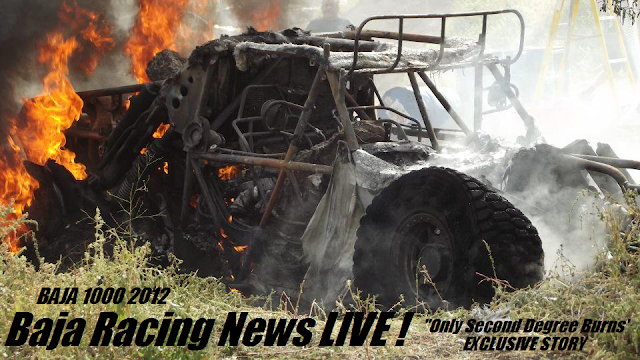 "The man from San Diego who was burnt is my neighbor. He is now in a life-threatening coma. The burns WERE NOT JUST 2ND DEGREE! Although SCORE is not responsible for his injuries, shame on SCORE for minimizing this incident." 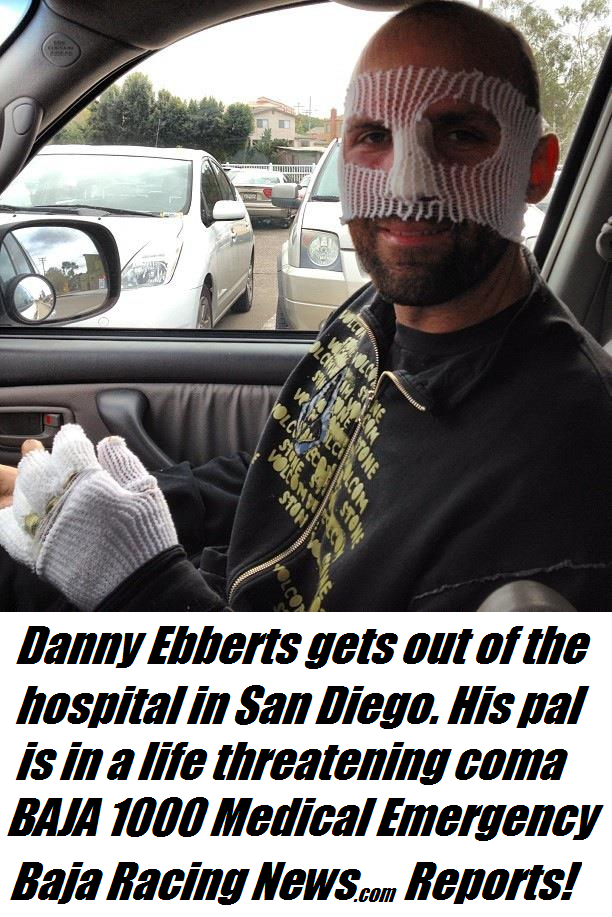 
"First off I would like to thank everyone for the well wishes and for the numerous visits I got here at the hospital. I would also like to thank the teams that read this thread and "fuel tower" thread, and possibly learned something. I am very, very glad to NOT hear about any fire accidents at this weekends race. I know our accident was a freak thing, but it shows how dangerous this sport we all love can be. I got confirmation from my doctor that I get to go home tomorrow. Tomorrow will be a very bitter/sweet day for me. i am very thankful to be going home, i was here longer then I was hoping, but will be going home quicker then doctors expected. It will be tough for me leaving with my crew member still here in ICU. I will have to come back once a week for a few weeks for check ups, but plan on coming back more then that to see Dan Caufeil and show him the same support he has supported my brothers and I with over the years. Also want to show support to good friends Lori and Greg Bragg that are pushing to return home after there accident. Please continue to pray for Dan and Lori, I know everyone's prayers and concerns really helped me. I will continue to post there progress for those who want to know."

Baja RacingNews.com is following up on this story>>>