Vildosola Racing Calls For Payback at SCORE Racing Events in 2013 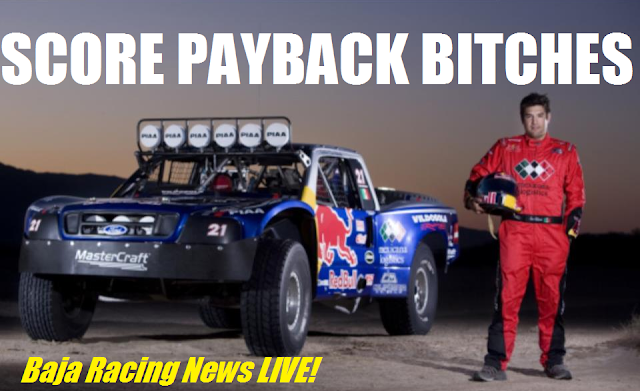 Vildosola Racing of San Diego California, called for some heavy payback, after getting ripped off by the former owner of SCORE International, from last years Baja 1000. The SCORE BAJA 1000 Results Fiasco STORY FOUND HERE has pissed off 'Tavo' Vildosola so much, that he called for payback, last night.

"We Know We Won The Baja 1000"Tavo sez more, "We know ONE person made a bad decision!". Pointing his finger at former SCORE owner, Sal Fish.

Video of Vildosola Trophy Truck screaming through a fans campsite, on the way to the finish line at La Paz

The Ignored Crisis at SCORE Medical Emergencies Dumped On the American Taxpayer for 39 Years!

SCORE International cannot ignore the costs and injuries of its Medical Emergencies Dumped on the American Taxpayer any longer, without the challenge of its California corporate charter. After 39 years and numerous seriously injured Americans dumped into the San Diego Emergency Medical System, the costs of the uninsured injured racers will be addressed.

How much money has been spent by the American taxpayer on uninsured injured SCORE racers, delivered to San Diego area hospitals? Now, with its headquarters based in San Diego county after the sale of the organization to Roger Norman, related questions have been placed in front of the new owner and directed to the authorized press representative of the company, after announcements of the sale were distributed.

Who is directing the emergency response of SCORE? Racers in Mexico do not feel comfortable with a non-Medical care response to their lives being at risk. More details, later.

Sustained attention will be brought to the mistakes, obvious in the incident responses causing unneeded harm and costs generated at the SCORE events held in Mexico. Reporting details will be focused on all those injuries, dumped into the San Diego County 'EMS' Emergency Medical System.

In 2007, Charges were leveled directly against SCORE attorney Oscar Ramos, saying they paid money to Ensenada medical clinics, to have them NOT medically treat race accidents CLICK HERE. The charges remian today!

In 2008, a racer was shot pre-running a SCORE event. The race sanctioning body SCORE, responded with a fraudulent cover-up.

Conclusions in the aftermath of the racer shooting, pointed to faulty insurance and inexperienced SCORE authorized personnel, putting the entire race emergency response system at risk.

In 2010, Mike Jenkins almost killed two American missionaries in Mexico, while pre-running backwards on the race course, the night before the race. An example of what carnage happens before, during and after these races by SCORE.

In 2011, obvious inadequacy in the SCORE Medical Emergency response system were exposed.

Just in 2012, these events were documented by Baja Racing News.
This Fire Helped the former owner of SCORE, sell off his company, this year

This story is ongoing>>>