UPDATE: SCORE IS F***ED, IT'S OFFICIAL

Kurt Caselli: "Roger Norman didn't have his homework done!..."Norman never explained the mess"...
"The Safety Issue". Cryptic.
***LISTEN IN TO KURT CASELLI FROM MARCH 2013 TALK ABOUT HIS EXPERIENCE WITH SCORE RACING at 7:37 ON THE RECORDING*** 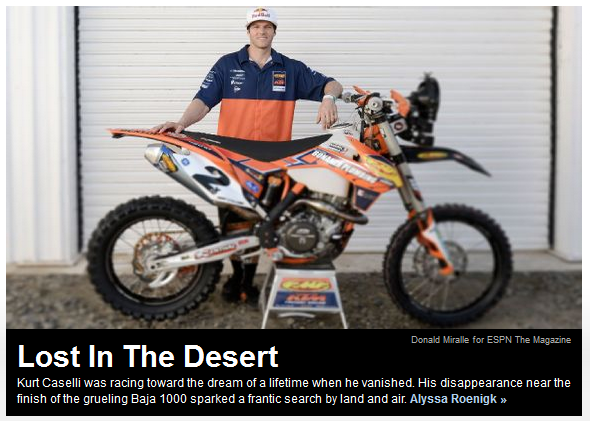 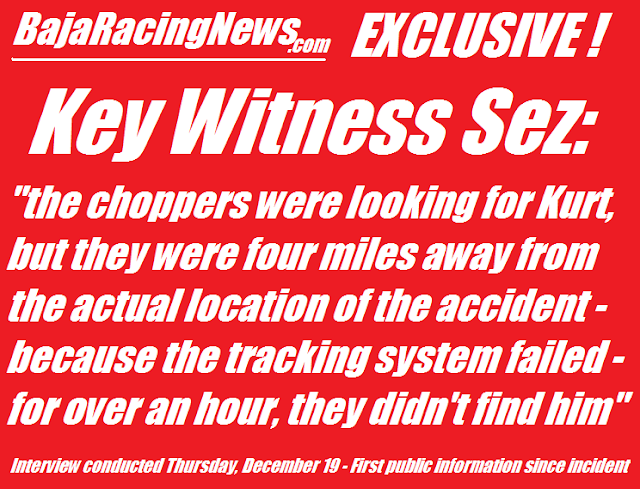 The Key Witness
By: Gary Newsome

December 31, 2013
Roger Norman and his wife, were sitting in his mom's restaurant named after the racing organization, this last Tuesday (Dec. 17) night. Only a couple of tables were busy, the place was mostly empty. During the same day, they pimped the night at the restaurant as a promotion. They pumped their facebook, twitter and youtube accounts, trying to get people to buy burgers and beer, with them watching their taped web based pigs-swill*.

*A promotional effort that uses known 'criminal' southern Baja off-roaders, who participated in a recent race that severely injured a race fan and one of the racers lost his finger due to desert racing disorganization. This contingent were charged by the State of Baja Sur authorities with crimes and the principles paid to get out of that jam. Roger was warned by a Baja south racer, but he ignored that his working with this element, commonly steals from racers.

Few showed up. After nearly a year of SCORE ownership, even the true believers, the die-hards can see through Rogers BS.

And there was Rogers involvement in the USA 500... 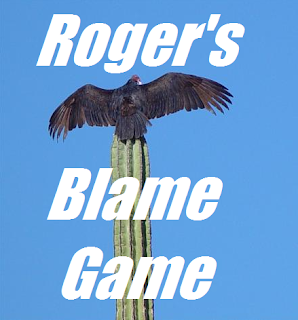 And there was Rogers comments about the dead Baja 500 contestant from earlier in the year. A Baja Pits favorite had been a victim of a heart attack while racing and bike theft after he fell to the dirt, dead. More later...CLICK HERE

And there was Rogers punting of a motorcycle participant of another Baja race and the endless video, internet and ego self promoting, before Roger Norman bought out Sal Fish. CLICK HERE

And Mr. Big Banana! We welcome back Big Banana for 2014! CLICK HERE!

He calls for viewers of the TV show:


The ESPN story hadn't broken yet and the awards ceremony had been a juvenile display. Roger Normans SCORE, forced the Caselli family to suffer through an embarrassing display of desert racing chest bumping, before "receiving" Kurts "awards". Really, an ill fated suck-up.

Just days later, SCORE-ESPN-ABC misspelled Kurts name on the vaunted TV Baja 1000 show. An incredible, disgusting display of how little care and concern for the memory of Kurt, his family & friends and racers in general. clearly, not "Priority #1".

Why wasn't there a "SCORE" chopper following the moto leaders, as in years past? Just watch the ESPN TV Show, its a Trophy Truck jerk-off. In an interview, Roger complained, "I spent 40 grand on choppers".
Norman has refused any further comment on dispatch of helicopters during the Caselli incident.


Just after Roger Norman, claiming he was "on vacation" or he thought he would have 'off-time' after the SCORE awards and the end of his comped travel to the Dakar event, the key witness in the Caselli incident told the entire story, exclusively with BajaRacingNews.com about their experience.

In the key witness's first interview since the incident, after avoiding talking with ESPN, we expose the truth about Roger Norman and his, SCORE-International.

"No one with SCORE or Roger have called me", said the key witness.

Roger had not run the Baja 1000 for 40 years as the ESPN story alluded. In fact, he had so few events under his belt, in Mexico, under the world-wide body FIA, he doesn't qualify to be an event organizer.

The key witness found Kurt, when others had no idea how to find him.

Kurt was breathing, when found. But, with no radio, no medical expertise and no direction from leadership on what to do other than, "find Kurt Caselli", the key witness failed to help Kurt.

Even though he is an experienced desert racer (not described in the ESPN piece), a member of a 'for profit' pit service and a motorcycle rider, he was completely unaware of what to do, to help Kurt.

The race sanctioner had failed its obligatory requirements to fully inform the racing community of the complete changes from the previous owner and the nature and extent of emergency and tracking provisions, to event participants.

No where on the event application is there required notice information.

KTM as a team, Kurt as a participant and the key witness as a 'rescue service', in place of a reasonable response from the event organizer, were unaware of the changes, risks and potential results of their inclusion in this 2013 Baja 1000, desert off-road race.


In his first public interview, the key witness told us, "I'm writing a book about my life and so far, this chapter is 28 pages long". "Kurt was the Elvis of desert off-road racing", he continued. "I'm working with Kim Carpenter and Rescue 3 to put an emergency medical rescue force on every SCORE race course, whether they allow us to do it or not".

When asked directly, what went wrong, the key witness said, "his helicopter didn't know where he was, either did SCORE operations, because when the weatherman called on the race radio relay network to us (for profit pit services) we knew then, there was a big problem". He continued, "I saw choppers looking for Kurt after that radio call, I was sent out to look for Kurt, it was an emergency".

The key witness feels bad that he didn't leave quickly, right away, to find Kurt. He lingered in the pit area. "Besides, we didn't know how long he had been "lost", nor his condition".

"When I found him and I moved Kurts bike into a more 'visable' position and then he left Kurt alone". Barely alive.

In more reporting in 2014, BajaRacingNews.com will continue to report on the inadequate command, control and tech connections of racing with SCORE in Mexico. We'll focus on the failed civil protection choices, the failed medical response and the predicted tracking fail of the Baja 1000 2013.

SCORE owns and employs a failed tracking system. The racers can only follow. There is NO real race sanctioner, no review board and no outside independent influence on the core decision making of the race organizer. It can be said, he only cares about the money. As he "parlays" the lives of his customers.

The "Safety Committee", Roger as a racer, demanded in 2010 of Sal Fish the previous owner of SCORE at the time, is GONE! CLICK HERE!

Roger demanded the committee, after HE ran over and almost killed a moto competitor in the 2010 race.

[Edit-
Bill Black was the "safety director" of SCORE during this event. Black refused comment, told BajaRacingNews.com to talk to the SCORE attorney. -November 6, 2014 ]

In conclusion, there will be more death, injury and damage as result of failed choices and decisions by the new owner of SCORE International.


The reason why Kurt Caselli was
"Lost In The Desert", as the ESPN article implies, was because no one could find him for hours. 3.5 miles from pavement and so near Ojos Negros, a suburb of Ensenada, the start and finish line of this event.

The reason the tracking system has not been used for competition speed events, since being created, was that the manufacturer mandated by contract the system NOT be used for those events.

So bad is the system in question, that location updates often aren't completed for thirty to forty-five minutes. Many times, even longer in various circumstances.  In speed events, in the middle of variable topographic terrain, updated signal failure is common. The system claims 2.5 minute updates.

We also challenge the race sanctioner to prove its command, control and communication plans for future events in Mexico will not result in complicating another racer death.

The greatest threat to racers in SCORE events in Mexico, is not the racing! It's the ignorance of the desert racers, generated by misinformation, a lack of information provision and use of untested and/or failed systems by the race organizer, Roger Norman of SCORE International.