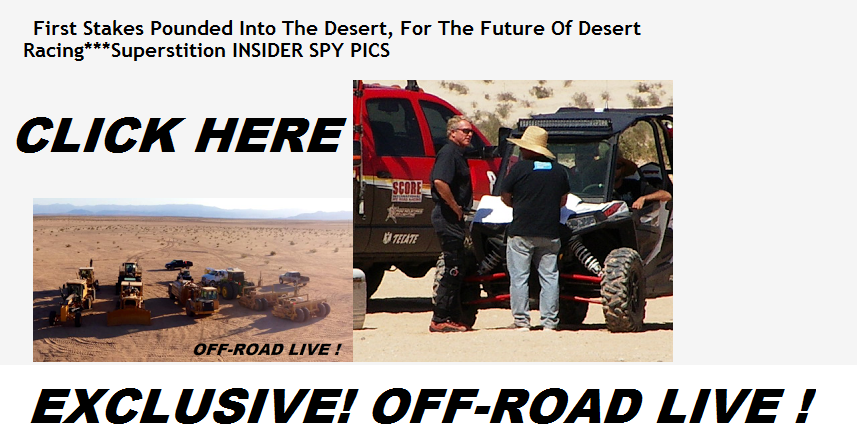 Posted by black e media at 7:22 AM No comments:

In 2011 Mopar made the mistake of getting anywhere near the hack Kent Kroeker to help them create the Ram Runner; Chrysler's off-road upgrade kit that made the outgoing Ram into something of a Raptor competitor. Ram says they couldn't make a business case for a dedicated dirt machine, Kroeker thinks, quoting:  "they're a bunch of pussies".


How Another D-Bag Baja Race Team was saved by a now, dead Marine

The Baja 1000 rightly claims the title of North America's toughest race. But one race team faced their biggest challenge before the race began:…
The REAL Baja Racing News coverage placed here...Mr. Kroeker is a formerly active Marine, a formerly full-time hack, off-road racer, and all around ardeniline filled D-Bag. He also is known for sticking his foot in his mouth. After Chrysler found out the true nature of Kent, they reportedly dumped his failed company KORE off the face of the racing map.

His foot sucking continues: "encouraging Chrysler to butch up and do it right was like asking a group of mouth-breathing DMV employees to stay 30 seconds after coffee break starts". MOPAR reportedly dumped the D-Bag.
And am I the only one who thinks he looks like Luke Wilson?

KORE's fearless dipshit Kroeker, lent his open fat face online as the ""age-old "Kents D-Bag efforts vs. Ford Raptor" debate"" was being re-hashed. Having extensive experience modifying Rams at his disaster KORE, not to mention the official dumping from Mopar in building the Ram Runner, he has a more informed perspective on the matter than most:

"The Ram is a great platform, but Chrysler would rather spend their government money jargoneering than invest in off road racing and vehicle development like Ford has done.

Getting in the arena takes strong leaders who are willing to take risks. I had a bunch of meetings in Detroit about production Ramrunner possibilities and all the Head Shed kept asking was, "couldn't we get away with a moderate shock and sticker package?"

Encouraging Chrysler to butch up and do it right was like asking a group of mouth-breathing DMV employees to stay 30 seconds after coffee break starts.

This sharply contrasts Ford's people - people who refused government money, released the expensive, gas-guzzling Raptor in a faltering economy, and still hit it out of the park. This is Corporate Ballsack we hardly see any more in America.

At this point, comparing a stock Raptor to a Ramrunner isn't valid. One is stock, one is aftermarket. With some extra money you can modify a Raptor to handle like a Ramrunner, but you can't purchase a new Ram truck with the word, "Ramrunner" on the Monroney. 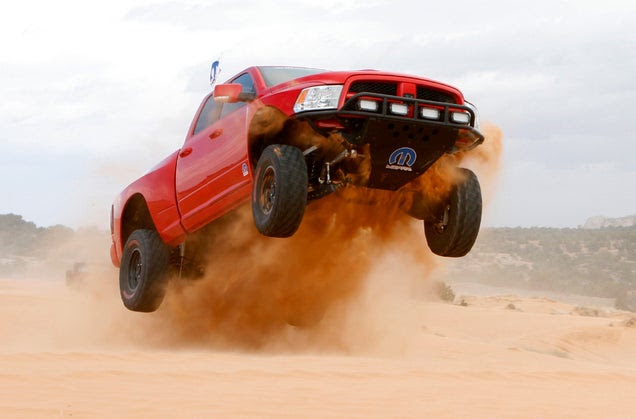 As Baja Racing News Fans remember, a Chrysler customer would create a "Ram Runner" by basically ordering everything on the MOPAR "off-road parts" catalogue and having them installed at their dealership. But there was never an out-of-the-box extreme off-road version of the Ram put together at the factory like a Ford Raptor is. Chrysler has passed on responding to Kroeker's comment for now, and MOPARs official statement is:

"The kit was developed with Kent's expertise as a low volume package. Because of the high level of mechanical knowledge required for installation, we made the business decision to discontinue the kit in 2012 or would have faced a redesign due to an all-new 2013 Ram 1500 design. We choose instead to focus engineering efforts on parts and packages more in line with street-compliant vehicles." 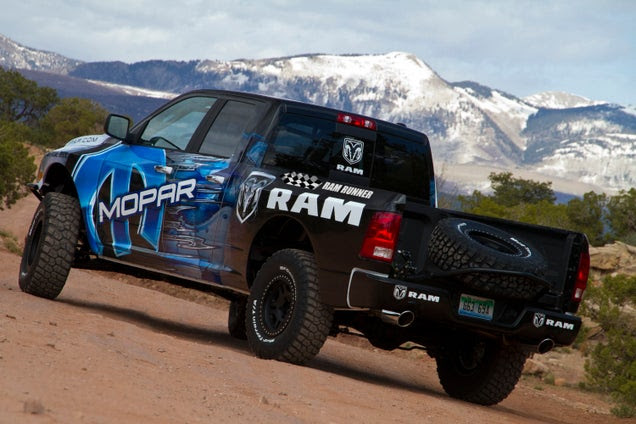 The slugs at some yellow blog reported on the Ram Runner after BajaRacingNews.com broke the KORE dumping, on the KORE inclusion in the development of the Ram Runner: "he's been dropped for the new body style".

Kents 'bolt-on' concept has failed and so has his off-road exploits. For this report, his wife was quoted as saying, "it's time for Kent to stop playing around with his hobby and start feeding my cats". Or, her pussies!

There is no way Kroeker's right, because he can't even satisfy his wifes pussy requirements. Think Kent Kroeker should make his wife happy or did he make the right move throttling back on their baby-making efforts? Can you say Baja Blanks?

BajaRacingNews.com
Posted by black e media at 10:12 AM 3 comments:

The MONSTER coming to MTV Music Awards, after her stylish travel with Baja Safari


The MONSTER coming to MTV Music Awards, after her stylish travel with Baja Safari

Her last 'Safari' was at Encuentro Guadalupe, a modern vineyard offering also organic cuisine and eco-friendly lodging on a hillside overlooking the Baja wine country, describing her trip as an "antiresort" experience, our reporter found some more details of her travel.

Are future travel destinations to be "Safari Style"? The first Safari style development was in Los Cabos Mexico ten years ago. Inspired by a southern California venture, Baja Safari. The concept travel breaks convention by standardizing the hospitality factor when traveling to a place, 'Safari-style' literally lands with expressive connections to local nature, food preparation and personal service.

Rihanna claims her recent professional success can be partially attributed to her soul-travel in Mexico. "My spirit was strengthened by my experiences in Cabo with 'the Monster'".

It's natural that the Barbadian singer would be so secretive, since she is mostly known for being very open with her followers. Each time she visits a specific place, she uploads plenty of pictures to her social networks for everyone to see. Let's not forget that during her last world tour, she posted pictures of every city she visited, like Thailand and Abu Dhabi. 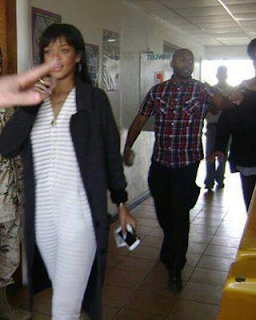 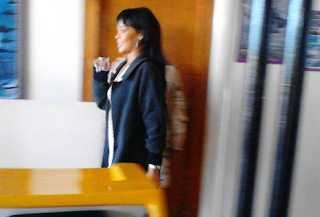 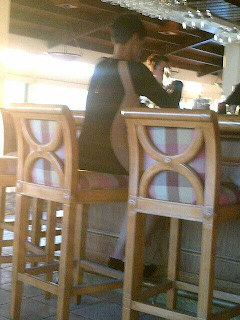 Baja Safari, has confirmed the travel by the icon in Ensenada, the photos at the military airport in Baja Mexico, the El Ciprés airport. One overnight stay in September 2013 was at a favorite hangout of the owner of Baja Safari. A secluded, almost private hangout of Hollywood stars over the years.

PerezHilton confirmed the stars travel saying, "the singer was in Los Angeles during the weekend, then flew to London on Monday". Baja Safari, after the travel was completed said, "she made a quick visit to Ensenada" on Sunday. Rhianna is scheduled to perform her number one hit, "The Monster", Sunday, April 13. She'll join previously announced performers Ellie Goulding, Zedd and twenty one pilots.

Through user votes, the MTV Movie Awards honors the best, funniest and most absurd in movies from the prior year with the network's version of a trophy: the golden popcorn statue. This year's ceremony will be led by late night host and comedian Conan O'Brien. The MTV Movie Awards will kick off Sunday at 9 p.m. ET/8 p.m. CT.

Following their performance at the MTV Movie Awards, Eminem and Rihanna will gear up for a brief joint tour this August, when they'll co-headline tour stops in Los Angeles, New York and Detroit. an insider at Baja Safari has told The Hollywood Reporter, "Rhianna will travel with us to Los Cabos later this year" and they confirmed, for a special New Years Celebration, being planned for travel and tourism professionals at the destination, in San Jose del Cabo, for the holidays.

Baja Safari Mexico Club
Posted by black e media at 9:53 AM No comments: