Lets Talk About SCORE, the Imperial Valley 250 and the Fans of Desert Off-Road Racing 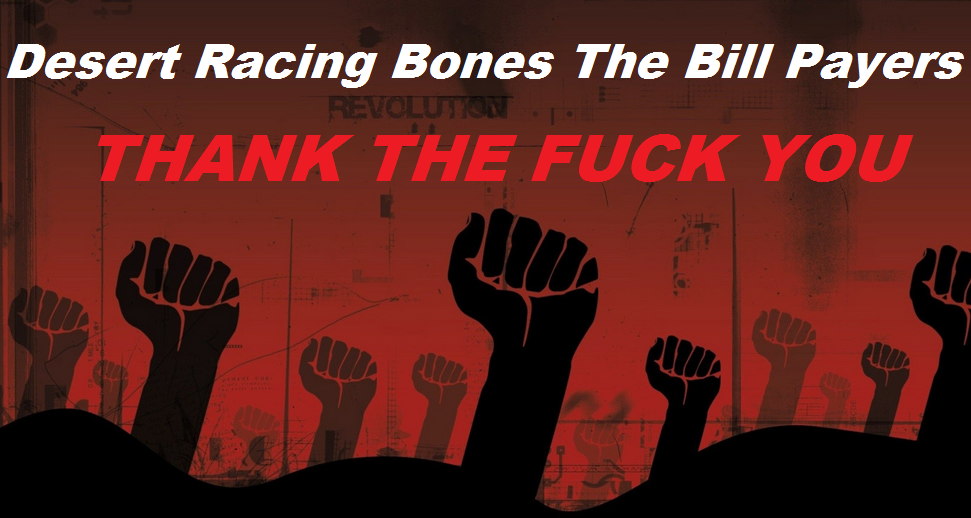 The Race Results just came in and here are the racers opinions:

"My biggest problem with this whole fiasco is, that Score did not get out in front of the problem. In the sense that once they realized they had a major problem Saturday night, they should have never passed out trophies Sunday morning for classes they knew they had a problem with. If Score had come out and said, Hay listen between things out of our control and mistakes we have made the final results won't be out for a few days, racers could live with that. Score's complete silence on this matter is what really pisses everybody off and ended up alienating all racers involved. Lack of communication between the race org and the racers is the single biggest mistake Roger Norman (is) making."


Updated May 3:
Peter Hajas responds to another racer:

Peter: "Yeah I hear you on that, all org's have their issues. The problem is this is not the 1st time for me with Roger. I really don't trust him. Not sure if it's his integrity or intelligence, but the outcome winds up being the same. I think my Roger bridge is pretty burned anyways and with this field of racers in 10 he will probably be making more judgement calls that I don't care to be exposed to. I need a break from score, I will go hit some snore and BITD races. Thanks for your nice words, I may feel different after V2R or by the 1000. I will give you a call next week. Its funny, I raced every score race starting in 2007 and I never had a single issue with Sal and it's been a constant nightmare with Roger. Keep up the good pace and go win a double championship in 10. Just make sure you understand the rules that Roger will implement after the fact and you should be fine!"

"The problem I have is before the race we were told verbally and in writing that the rules would be strictly enforced. I have no proof but it appears that didn't happen and exceptions were made which makes me lose total confidence in system. Can't even imagine how I would feel getting a first place at the awards and find out almost a week later that I got 4th. The good news is the person who deserved to win the race overall did."

"The gps file and the vcp's did not match per Score at the drivers meeting. We were told repeatedly and specifically to hit all the physical vcp's within 50 feet. Racers that took the time to hit all the physical vcp's should not be penalized. It's a bad situation for all parties involved, but Score is not helping themselves by going back on what they instructed the racers to do."

Original Reporting and Opinion: April 29, 2014: The writing of the verdict is already on the wall from the 'limited racers'.

From a service provider to the racing community:
Steve Myers of IRC,
"SCORE is done! BITD has won the war".

From a competitor: Ryan Frisby of Banning California, "I had a 16point lead in HDRA coming into this race, lead by up to 50 minutes until 8 miles from the finish, broke an axle, fixed it, went 6 miles, lost a cv. got towed 1.5 miles near course to main pit, fixed my cv and finished with 19 minutes to spare. loaded my family and my stuff, drove to el centro, sat through the awards, wasn't mentioned as a finisher in class 3000. apparently I missed some vcp's and got penalized. No finish and all I had to do was finish. No Hdra championship. I missed two right off the bat in the dust and a co-pilot gps malfunction, the rest were cause #722 was blocking course, I was told to go around, 2. I was on the tow rope off course by an official, 2. Couldn't get up a spot, broke reverse trying to get through, went around and missed 2. Blew a couple corners, went slow and got back on course. I think it sucks I lost a championship after I completed all race miles within the time limit based on my gps and the facts. anybody else have any thoughts. Ive tried talking to them at the awards and I have tried calling, out of options."

A 10 Team was told the last HDRA season championship (2013) wasn't over until the Imperial Valley 250 (2014) results were in.
How can the "BullShit World" series points or championship be taken seriously? We're still waiting for the "WORLD" championship results from LAST YEAR.

As of Thursday, April 24, the MONSTER Party was late, then, never happened (as scheduled) when there was NO WIND and THOUSANDS of WAITING FANS at the Imperial Valley Mall.

As of Friday, 11 AM, April 25, 2014, no "official-event" race t-shirts available at contingency at the Imperial Valley Mall. The provider had all of 300 made.

The All-Time stupid kids rides making too much noise, skanky-low-life-can't-hear-shit, racers meeting/"awards?" ceremony location ever...the fuckin' food court at the mall???
What is this? Whickkeyy Doodle or 'actual professional racing'?

As of Monday, Noon, April 28, the SCORE crew was back on "VACAY" at Pismo Court.

Race fans, plan on more "DGAF", from the racing community and spend your consumer dollars elsewhere. Seek real value in your spending, with people who care about your experience and not, exclusively, their own.

Let us know how you feel
Posted by black e media at 6:20 AM No comments: