Ongoing Reporting
Revelations from inside sources and recent reports on the racing concern, SCORE International and its one man operator, Roger Norman. Citizen Norman.

The Mexico Welfare Story is NEXT>>>

Norman couldn't care less about safety, the locals and fifty years of racing history. He's selling his "Worlds Largest Industrial Park". Did we mention our partners over at AMEX were the source for the Emmy Winning Journalism that blew the whistle on the Mesa de Otay, Baja California, battery company waste (discharges) dumping case that caused severe birth defects in Tijuana children in 1989?

The children living downstream of the company (whose mothers were drinking the arroyo water that contained the discharges) that was dumped waste in the water, were born without brains.  As stated, literally, without a brain. Anencephaly

The prosecution of those responsible for the Alco Pacífico site in Tijuana (where thousands of tons of toxic waste were abandoned when the company went bankrupt) resulted in a $2 million court settlement in 1993, earmarked for remediation of the site. Yet it took four years for cleanup to even begin. During all that time a mountain of lead was left uncovered in a residential area, near a dairy farm.

Considering the expert witness revelations about the Norman owned land at the Reno Nevada "races", now being used for 'Industrial' purposes, we hope Roger has his 'paperwork' in order! 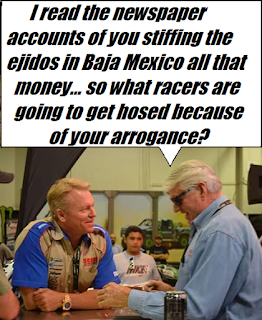 Gary Newsome
BajaRacingNews.com
Posted by black e media at 6:21 AM No comments: 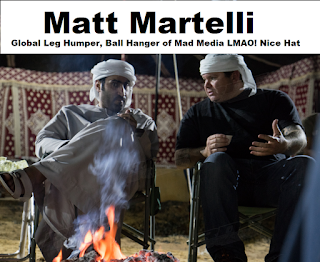 We'll expose Al-Matthead, for his disdain of 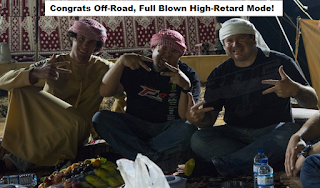 those getting in the way of their kindy-tv productions. Like Matts call for qualifying(!) to race in his events and higher entry fees!

CLICK HERE TO LISTEN IN TO THE ENTIRE PANTLOAD OF THE CORPORATE CUNTS, CAMERON STEELE AND MATT MARTELLI.

*Did we mention the Polaris RZR Recall Notice! 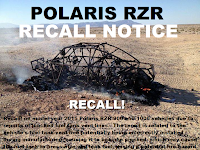 Recall Notice! "on model year 2015 Polaris RZR 900 and 1000 vehicles due to reports of pinched fuel tank vent lines. The recall is related to the vehicles fuel tank vent line potentially being incorrectly installed during manufacturing, causing it to become pinched, which may cause the fuel tank to pressurize and leak fuel, posing a potential fire hazard." PR piece from Polaris... 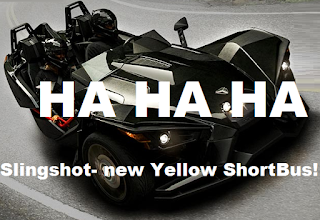 *Did we mention Slingshot?!

Matt Martelli on the Slingshot. "It's better than any truck I've ever owned".

The new yellow
ShortBus for those who can't ride real motorcycles and can't afford a Real Truck.

Details of the Slingshot X film remain highly guarded outside of a film teaser (recently) released. Fans can expect to be wowed with a film that will capture what the unique and exhilarating Slingshot roadster is capable of – especially with one of the most respected precision car drivers behind the wheel. The film is set to release later this year.

"When Polaris Slingshot and Mad Media approached me about being a part of this project, I was intrigued to say the least," Foust said. "The second I laid my eyes on a Slingshot I knew it was going to be a unique machine to throw around. I'm stoked to show fans what this one-of-a-kind vehicle can do!"

This new three-wheeled moto-roadster will sport a custom turbo charged engine with paddle shifted automatic transmission, amongst other race-inspired modifications, making this one of the best handling and most powerful Slingshots ever built. [The SlingShot TP!

Slingshot [TP] is the premiere [bunghole] portal for Slingshot enthusiasts, builders, and owners. Based around the award-winning work of Mad Media - this content rich, interactive website is a premium entry point into the world of the three-wheeled roadster that took the world by storm in 2014.

Mad Media is a San Diego based marketing and creative agency, with in-house film and television production. They specialize in crafting authentic, culturally engaging brand messages, and deliver them across print, web, photography, and film platforms. Mad Media has been leading the online content revolution since 1995 producing major commercial, television, online content and [diarreal] viral film projects such as the Gymkhana series and XP1K series."
What a PantLoad